Memories of spring training with the Detroit Tigers 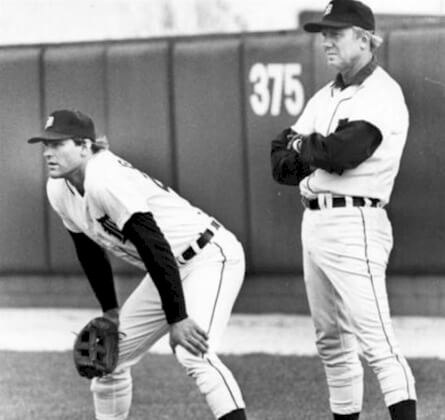 Al Kaline works with Kirk Gibson in the outfield during spring training in Lakeland, circa 1983.

Not so long ago, fans had good access to players at spring training. The barriers that separate the Detroit Tigers from the public were fewer and easier to circumvent. At least that’s the way it was for me and my friends when we made excursions to Lakeland in the early 1980s.

Young, ambitious, and carefree, we’d take a week or so and drive to Florida with the intent of turning our amateurish journalistic credentials into actual stories. And to some extent it worked. I was just beginning my efforts to sell freelance stories to the Detroit Free Press and in the years to come I would write many features for the Sunday magazine—and then eventually become a staff copy editor and reporter. Accompanying me were my friends Jerry Lemenu, a freelance artist whose sketches and caricatures would accompany quite a few of my features—and who for quite some time made his bread and butter as a courtroom artist. Completing our triumvirate was photographer Carl Bidleman.

One of the highlights of our first trip was an evening we spent with Kirk Gibson and Dave Rozema. We often saw Gibby shunning lines of autograph seekers outside Joker Marchant Stadium—adults and kids. But Carl somehow got Gibby’s ear and  wrangled an invitation for us to spend an evening at the condo the two Tigers were renting outside Lakeland.

While Carl and Jerry rode with Gibson, I ended up riding to the outskirts of town with Rozie. It was one of the most harrowing car rides I’ve ever taken. Rozema’s attention span was even much shorter than you could have imagined even if you watched him clown around on the field. Behind the wheel, Rozema swerved his head at virtually every pedestrian or cyclist we passed—and it didn’t have to be a pretty woman, it might be some kid. He also was distracted by stores and other buildings, cars of all types, and any cloud passing across the face of the sun. His head swiveled like it was on a string, and I feared for my life. It was like riding in a car driven by a four-year-old.

Things were calmer once we arrived. Carl and Jerry played darts and pool with our host—while I concentrated on trying to “interview” them.  Gibson’s replies were characteristically curt or downright rude, while Rozie’s were silly. I don’t recall that the evening contributed much to my feature story that year. They did make for an intriguingly mismatched pair of friends, and it was easy to see the cocky outfielder was taking the easily distracted pitcher under his wing.

Other memories are shinier. I still have a photo of me interviewing Mark Fidrych, who was then attempting a comeback with Boston, sitting outside the clubhouse. And I still have the indelible pride of a game when Ernie Harwell invited me to sit next to him in the broadcast booth at Brandenton on a day when he wasn’t on air. Spending a couple hours just talking baseball with Ernie was a dream come true, as wonderful as you can imagine.

I imagine the players and team personnel are locked up much tighter now than they were then, but spring training should still be a place where you can relax and dream, where you and baseball itself are fresh and young and hopeful.