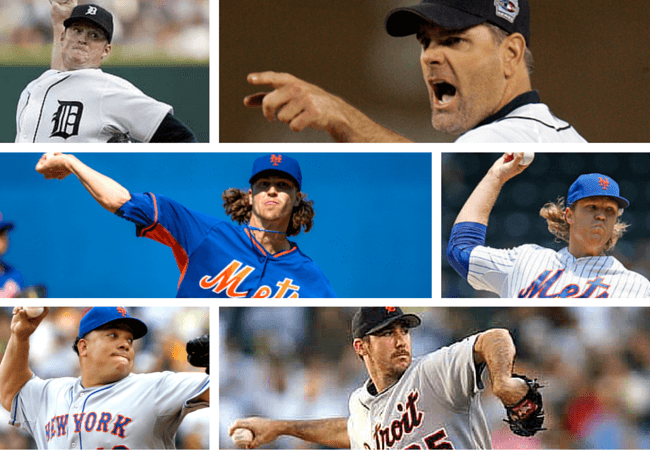 One thing has stood out for me as I watch this year’s postseason baseball: The remarkable similarity between the New York Mets starting staff, and that of the 2006 Detroit Tigers.

The two teams have others resemblances as well. Both, for example, had been bad for years, and took everybody by surprise by their meteoric success. Like the Mets, the Tigers didn’t really have any big stars, but relied on timely hitting.

But the parallels between their five starters are the most striking.

The Mets have a Big Three made up of young studs Jacob DeGrom (27 years old), Matt Harvey (26), and rookie Noah Syndergaard (22).

The Mets have 42-year-old Bartolo Colon, still winning games (14 this year) and providing a wealth of experience to the young club.

The Tigers had 41-year-old Kenny Rogers, who won 17 in 2006, and was a steadying force to the baby-faced team.

The Mets have a steady, if unspectacular, fifth starter in John Niese. The Tigers had rookie Zach Miner, who didn’t dazzle anybody with his stuff, but was a serviceable talent in his role as a spot starter.

It’s hard to believe that it has been nine years since that ’06 Tiger pitching staff burst onto the scene. It threw five shutouts in the first 25 games. The 2005 club, by contrast, threw only two shutouts all season. All told, Detroit held the opposition scoreless a total of 16 times in 2006. That’s the highest total by the Tigers since the 1969 team posted a whopping 20 shutouts. And that was before the advent of the designated hitter, in an era dominated by pitching. Truly remarkable.

Right now, everyone is looking at the Mets and predicting they will have a dominant staff for years to come. And they just might. But many prognosticators were saying the same thing of the young 2006 Tigers staff. But a funny thing happened on the way to world domination (as it usually does). Injuries, age and ineffectiveness kept the ’06 squad from sustained success in the years to come.

Verlander is the last remnant of the entire team, and he has had a fine career, and looks to be poised for a comeback season in 2016. But let’s take a look at the other studs on that staff, and what happened to them.

Bonderman, at the time, seemed like he was going to be the best of the entire bunch. He struck out 202 batters in 214 innings, and had a nasty slider. A former first-round draft pick by the Oakland Athletics, the Tigers acquired him in a three-team, seven-player trade that also involved the New York Yankees. The Tigers gave up Jeff Weaver in the deal, and also acquired Carlos Pena.

Bonderman won 14 games in 2005 and 2006, but after that he didn’t have much of a career. A blood clot in his arm caused him to miss most of 2008, and he was never the same pitcher afterward. He appeared to be out of baseball after the 2010 campaign, but the Seattle Mariners signed him in 2013, and he finished the year with Detroit, winning one game. Bonderman won 69 games and lost 81 in his career. Hard to believe, but he is only four months older than Verlander.

Robertson was sort of a bulldog on the mound, which endeared him to fans. He came to the Tigers via the Florida Marlins, and had a career year in ’06, going 13-13. His “out” pitch was a four-seam fastball, but he also threw an above-average slider. Robertson became a baseball nomad, playing for eight organizations, including an abortive comeback attempt with the Tigers in 2014, when he pitched in 14 games for the Triple-A Toledo Mud Hens.

Kenny Rogers will always be remembered fondly by Tiger fans for his lights-out performance in the 2006 postseason, when he pitched 23 scoreless innings while winning all three starts. Rogers was known as “The Gambler,” and he brought a solidifying veteran presence to the ’06 Tigers. But Rogers had reached the end of the line; he won only three games in 2007, and nine in 2008, before he was out of the game.

As for Zach Miner, the Tigers used him out of the bullpen and as a spot starter after 2006, and he pitched briefly with the Philadelphia Phillies in 2013. His career mark was 25-22.

The 2006 Tigers starting staff is proof that nothing is guaranteed in baseball.