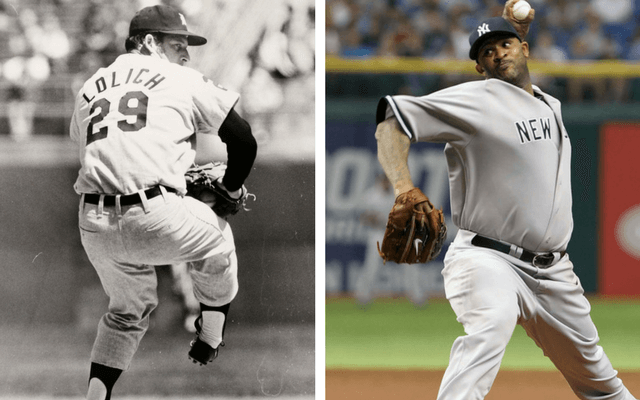 At some point this season, CC Sabathia may eclipse a record that Mickey Lolich has held since 1973.

For now, former Tiger starting pitcher Mickey Lolich is still king of the hill. Will he finally be nudged off the summit after more than four decades?

Since the 1973 season, Lolich has held the record for most career strikeouts by a lefthanded pitcher in American League history. Entering 2017, he held an 81-strikeout advantage over CC Sabathia, the big fella with the Yankees. As of this writing, through nine starts, CC is less than 50 K’s behind Mickey. But given his uneven performance thus far for New York this season, it’s not a sure thing that Sabathia will get a chance to pass the former Tiger.

Challengers have come and gone over the years, but Lolich has maintained his grip on the record since passing Lefty Grove in 1973. When he threw his final game for the Tigers in 1975, Mickey had 2,679 strikeouts, 400+ more than any other southpaw in league history. The fact that he’s held onto the mark for so long is a testament to how ahead of his time he was.

Fans today are used to seeing a lot of swings and misses, strikeouts, and “punch outs,” but in the 1960s and 1970s, the game was different. Batters made better contact, and pitchers usually tried to pitch to that contact.

In 1971, the best year of Mickey’s career, American League hitters averaged 5.5 strikeouts per game. In 2017 that total has crept to 8.0 per game. Batters have never swung and missed as much as they do now. Lolich and the few others who could throw a fastball past big league hitters, were rare in his day. Using a knee-high heater, Lolich struck out as many as 200 batters seven times, peaking at 308 in 1971.

The first pitcher to threaten Lolich’s record was Frank Tanana, a Detroit prep standout who began his career with the Angels. Tanana could throw his fastball at speeds up to 100 miles per hour, but an injury halted his shot at the AL K record. Despite pitching 21 years and making nearly 600 starts in the AL, Tanana settled at 2,669 strikeouts, ten fewer than Mickey. The last 12 years of his career, Tanana was transformed into a savvy junkball pitcher who relied on a sharp breaking ball. As a result, his K totals plummeted.

In 1984, the Mariners debuted lefthander Mark Langston, a tall hurler who struck out 204 in his rookie season. Langston led the AL in K’s in each of his first three full seasons, and had 1,253 strikeouts through his first six seasons, nearly halfway to Lolich. But then Seattle traded him to Montreal (for Randy Johnson) and his career wasn’t nearly as dominant after that. Langston quickly returned to the AL after one yeat with the Expos and pitched eight years for the Angels, but shoulder problems robbed him of his velocity. He finished with 2,233 AL strikeouts.

Tall lefty Chuck Finley was the next pitcher to pose a threat to Lolich’s AL record. Debuting in 1986 for the Angels, Finley pitched 17 years in the AL, all but three of them with the Halos (where he was a teammate of Langston). He topped 200 strikeouts three times and stayed healthy into his late 30s, but ultimately a late start hurt him. The Angels used him as a reliever until he was 25, costing Finley about 50 starts. Had it not been for that, Finley would have easily surpassed 2,669. As it was, he finished with 2,527 K’s in the AL.

Circumstances kept Randy Johnson from breaking Lolich’s record. The Hall of Fame lefty is one of the greatest pitchers in the history of baseball, but when he was 34 years old, with nearly 2,000 AL strikeouts already to his credit, the Mariners dealt him to the National League. “Big Unit” spent nearly a decade in the NL, winning four Cy Young awards and fanning more than 2,300 batters. He bounced back to the AL with the Yankees in his 40s and racked up close to 400 more whiffs, but that still left him more than 100 behind Lolich with 2,545.

Sabathia may not be able to hold on

That leads us to Carsten Charles Sabathia, a 6’6 behemoth who burst on the scene as a 20-year old rookie with the Indians in 2001. Through his first seven seasons with Cleveland, Sabathia logged more than 1,100 K’s and stayed in the rotation. But then, like Langston and Johnson, he was traded to the National League. Sabathia pitched brilliantly for the Brewers in half a season in the other league, but came back as a free agent with the Yankees in 2009. Through the age of 32, all things were going well for the tall southpaw, but then the “Lolich Jinx” hit. In 2014, Sabathia made only eight starts before he suffered a serious elbow injury. Since, he’s struggled to regain his form and he’s only fanned about 330 batters over the last four seasons.

Through nine starts in 2017 (as of May 21), Sabathia has been ineffective in Joe Girardi’s rotation, often putting his team in an early hole. His ERA has hovered around or near 5.00 all season, and his velocity has diminished. Sabathia relies more on location and his off-speed repertoire now. With the young Yankees near the top of the standings in the AL East, the team may not show patience with the 36-year old in his 17th season if he keeps floundering.

Will Sabathia stay in the rotation with the Yanks or another American League club long enough to surpass Lolich’s mark of 2,679 strikeouts?

Since tossing his last pitch in a Tiger uniform, Mickey Lolich has withstood every “wrong-handed” challenger to his title as the Greatest Lefthanded Strikeout Pitcher in League History. He might not be ready to let go of that distinction.