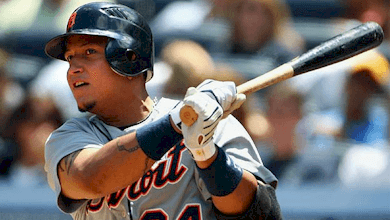 This season Miguel Cabrera has continued his impressive climb up the leaderboard of all-time Tiger greats. He’s turned in another fine performance in his eighth year as a Tiger.

Even though he spent 40 days out of action when he went on the disabled list for the first time in his career in early July, Cabrera is now poised to win his fourth batting title. The only concern had been about enough plate appearances to qualify, but since he’s back to everyday action there is no longer any problem—and even after a rare oh-for-nine day in Sunday’s doubleheader he is comfortably ahead of nearest challenger Xander Bogaerts at the time of this writing.

Cabrera has gotten plenty of recognition as the greatest pure hitter of this era. Few players in the history of the game have combined such power, on-base, batting average, and all-around productivity at the plate. In fact, he is unique in the history of the Detroit Tigers. He has the power of Hank Greenberg and the steady production of Al Kaline. Only Ty Cobb is his superior when it comes to base hits and getting on base—but Miggy has more clout than Cobb displayed.

In this time when wild swings are prevalent, when batting average has taken a back seat to power and on-base percentage, when walks and homers and strikeouts seem to define the modern player rather than putting the ball in play, Cabrera has actually raised his lifetime batting average this season. As a Tiger he’s hitting .327 lifetime.

Ty Cobb won twelve batting titles in his career, but the only other Tiger to win four batting crowns was Harry Heilmann, who did it four times in seven seasons from 1921 to 1927. Cabrera will now win his fourth in five seasons.

No other Tiger won the title more than once.

Among players with at least 3,000 plate appearances as a Tiger only Cobb and Heilmann have a better career batting average than Cabrera. Bob Fothergill (.337 average) and Dale Alexander (.331 in 1,966 plate appearances) are also above Cabrera on the Detroit all-time leaderboard, but Miggy certainly could catch and surpass Alexander before his career is over.

Miggy is sixth among Tigers with a career .406 on-base percentage, behind Heilmann at .410 and Greenberg and Roy Cullenbine at .412. (Cobb is the far-and-away leader at .434.)

It’s accurate to characterize Cabrera as the best pure hitter in Detroit history next to Cobb, and the best power hitter except for Hank Greenberg. Only Greenberg tops him in slugging percentage at 616. Cabrera is comfortably in second at .577 and should stay there.

In terms of combining on-base and power, Miggy is also in a solid second place in OPS in Tiger history. Greenberg’s career mark is 1.028 and Miggy’s is .983; Cobb is third at .950.

If you’re looking at counting stats, Cabrera will finish this season 21st in Detroit history in games played as a Tiger, 19th in at-bats, and 18th in in plate appearances. Yet he’s already 13th in runs scored and closing in on Willie Horton for 13th in hits (1,482 to 1,490). In total bases, he’s 11th, and early next year will pass Bobby Veach and move into 10th place. He’s also 10th in doubles and extra-base hits.

Earlier this season Miggy zoomed pass Willie Horton in RBIs to take over 12th on the all-time Tiger list with 914. He’s easily within reach of Rudy York (933); next is Alan Trammell with 1,003.

The real fun for Tigers fans will be seeing how far Miggy can move up the team’s all-time home run list. After averaging 38 dingers a year during his first six years in Detroit, Cabrera’s power fell off to 25 homers in 2014, and he’s hit only 17 this year (though injuries have curtailed his power stroke). He passed Horton this year to move to fourth place behind Kaline (399), Norm Cash with 373, and Hank Greenberg with 306. Miggy now has 269 as of Tuesday night. If his new pace is only 20-25 homers per year, he won’t get to 400 for another six seasons; if he goes back to slugging at his previous five-year pace, he’d be the first Tiger to reach 400 in early 2019. Wouldn’t that be something to celebrate?

Perhaps a better story can be told with the newfangled stats. In WAR, Cabrera is already 10th all-time as a Tiger with 46.5, and he’s been averaging about 6.0 WAR per season. On that pace he is poised to pass Norm Cash in 2016 and get close to Greenberg’s eighth-place 54.1.

In adjusted OPS+, the all-time Tigers leaders are Cobb (171), Miggy (163) and Greenberg (161). That seems about right to me—Cabrera as a batting threat about equal with or maybe slightly ahead of Greenberg and behind only Cobb.

Longevity will determine how far Miggy climbs up all those other Tiger leaderboards. He was turning 25 when he arrived in Detroit, so we missed his first five seasons when he was in Florida—but he shows few signs of slowing down at age 32 and should be a productive hitter for many years to come.