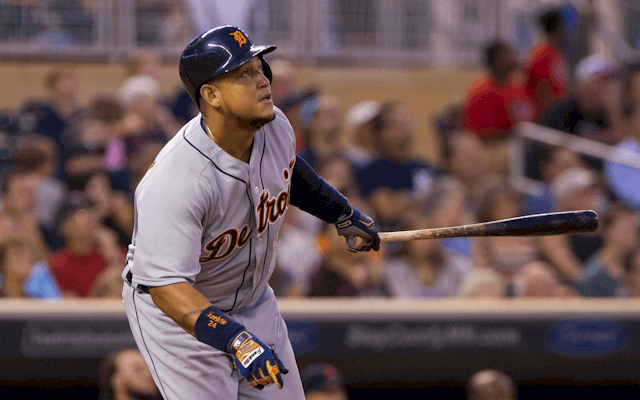 Miguel Cabrera is approaching 2,500 hits for his career and he also has 500 home runs in his sights.

Watching Miguel Cabrera is like watching an artist. I forget that until I take the time to really watch him.

The way Miggy sizes up the pitcher and is able to hit to all fields is something I haven’t seen since Tony Gwynn.

So even with knowing how special Cabrera has been to watch — especially in a Tigers uniform — some of the things he is able to do still amaze me.

On Labor Day, Cabrera made history by becoming just the fourth player in history to hit 300 home runs with the Tigers. He joins Tiger legends Al Kaline (399), Norm Cash (373) and Hank Greenberg (306) in Detroit’s 300-homer club.

If you think about it, it’s astounding that there are just four players in this group. The Detroit Tigers have had some great sluggers over the years: Rudy York, Rocky Colavito, Willie Horton, Darrell Evans, and Cecil Fielder, but none of them stayed with the Tigers long enough to accomplish the feat.

It’s also astounding that Cabrera HAS stayed with the Tigers long enough to accomplish the feat.

Cabrera has made the Tigers relevant

Cabrera has single-handedly lifted the Tigers from a playoff team to a World Series contender just about every year. Since his arrival in the 2007 off-season, the Tigers have been to the postseason four times and played a 163rd game another year with a chance to win another division title. This year, the Tigers are once again in the hunt for the playoffs and Miggy is doing his best to keep Detroit on track with some heavy labor on Labor Day.

The most impressive part of Cabrera’s milestone on Monday was the way it was reached.

Miggy had two home runs and four hits against Chicago White Sox ace Chris Sale, the All-Star Game starter and one of the front-runners for the American League Cy Young award this season.

He had nothing on Cabrera who did whatever he wanted with the dominant lefty. Miggy joined two others (Ryan Braun and Eric Hosmer) as the only batters to hit two homers off Sale in a single game. It was also only the fourth time the paper-thin lefthander had allowed as many as four hits to a single player.

Milestones are piling up for Miggy

But that is what makes Cabrera special. Every season, he seams to have a feat that makes you scratch your head — and they aren’t all as big as the Triple Crown, though that was truly astounding.

Milestones have been rolling in for Miggy in 2016. A few weeks ago he drove in the 1,000th run of his Detroit career, making him just the tenth Tiger to reach that mark.

On the career ledger, Cabrera is making an impressive climb. Earlier this season, Miggy hit his 500th double, recorded his 1,500th RBI, and appeared in his 2,000th career game on June 12th at Yankee Stadium, when he had two hits. He also scored his 1,300th career run this season. Entering Tuesday’s game in Chicago, Cabrera is nine hits away from 2,500 and he needs three more walks to reach an even 1,000. Given his current pace, these milestones will be rubbed out in short order.

Either way, there are milestones that make Cabrera special and mini moments that are just as impressive. Both kinds are piling up for the game’s best hitter.

Just a couple of months ago, Cabrera was batting under .300, which had some impatient Tiger fans worried. But he has surged to a .316 mark through Labor Day and is amazingly at .320 for his career — something only a handful of players have done since World War II. In a Tiger uniform he has hit .325, a figure bested only by Ty Cobb and Harry Heilmann among batters who made at least 3,000 trips to the plate in a Detroit uniform. Heady company.

Cabrera is nearing 450 home runs and has a chance to reach 600. He won’t turn 34 until a few weeks after opening day next spring, so it’s not unrealistic that he might play six more seasons. Watch closely and he will have a special game to reach those numbers.

The milestones will amaze you but the way he gets to them on a daily basis is what makes Cabrera truly astounding.

Tell us what you think about Miggy in the comments section below.