What does Miguel Cabrera have in common with Brandon Inge and four other former Tigers? 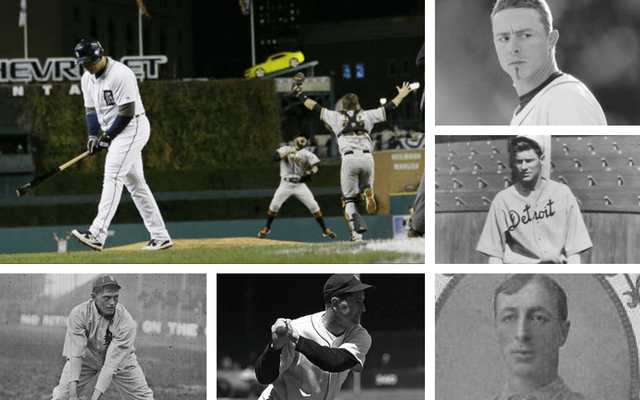 Clockwise from top left: Miguel Cabrera after making the final out of the 2012 World Series; Brand Inge; Marv Owen; Tom Jones; Earl Averill; and Boss Schmidt, all of whom also made final World Series outs.

What does Miguel Cabrera have in common with Brandon Inge, along with four other players from baseball’s past: Boss Schmidt, Tom Jones, Marv Owen, and Earl Averill?

To find out, you will have to brush up on your postseason history.

The answer is, they all made final outs in a World Series while with the Tigers.

The most interesting of the bunch is the one you’ve most likely never heard of. Boss Schmidt was a hardnosed, if ordinary, catcher with the Tigers in the first half of the twentieth century. He had a reputation as a clubhouse brawler. In fact, he got into more than a couple fistfights with Ty Cobb, even pummeling him to a bloody pulp on one occasion. As often happens in such cases, the two later became lifelong friends.

Detroit went to three straight World Series from 1907-09. Schmidt made the last out in the fifth and final game in ’07, a pinch-hit pop fly to Cubs shortstop Joe Tinker. The Tigers lost that game, 2-0, and the Series, four games to none (with one tie).

Wouldn’t you know it, Schmidt pinch hit in the ninth inning of the final game of the ’08 World Series. This time, he hit a dribbler in front of the plate. Catcher Johnny Kling pounced on it and tossed to first for the out that gave the Cubs their second consecutive world championship. To this day, Schmidt is the only player to make the final out in two consecutive World Series.

Detroit was hoping for better luck the next year, but once again, they came up short, losing in the World Series to the Pittsburgh Pirates. In Game Seven, 35-year-old first baseman Tommy Jones came to the plate in the ninth inning with the Tigers down 8-0. Jones had appeared in only 44 games with the Tigers that summer, hitting .281. Now, with his team down to its last out, he hit a fly ball to left fielder Fred Clarke, ending the affair.

Tigers fans would have to wait until 1934 for another World Series. In a thrilling seven-game tilt, the St. Louis Cardinals prevailed. Future Hall of Famer Dizzy Dean shut Detroit down in the deciding game. By the time Marv Owen came to the plate with two down in the bottom of the ninth, the Bengals were being whipped, 11-0. Owen, a .317 hitter in ’34, was the third baseman on Detroit’s vaunted infield known as the “Battalion of Death.” He hit a groundball to the shortstop for a force play, and the few fans left at Navin Field headed home for the winter.

The Tigers again played the full seven games in the 1940 World Series, and this time the outcome was much closer. Detroit’s Bobo Newsom and the Cincinnati Reds’ Paul Derringer battled it out all afternoon at Crosley Field, and the Reds held a precarious 2-1 lead heading into the top of the ninth. But the bottom third of the Tigers’ lineup couldn’t do anything. When Earl Averill, pinch-hitting for Newsome, tapped a weak groundball to second, it was all over. Averill had forged a Hall-of-Fame career as a center fielder with the Cleveland Indians, but he was nearly finished by the time he reached the Tigers in 1939. In fact, Detroit would release him in February 1941.

The Tigers would not lose another World Series until 2006. It was a Cinderella story all summer long, with the team only three years removed from an awful 119-loss season. But the St. Louis Cardinals popped the Tigers’ fairy tale bubble, winning the World Series in five games. Brandon Inge struck out swinging against rookie reliever Adam Wainwright for the final out. It was a disappointing way to end what was Inge’s best season ever, with 27 home runs and a 4.9 WAR.

Detroit made it to the World Series six years later, but suffered a sweep at the hands of the San Francisco Giants. Miguel Cabrera took a called third strike from Sergio Romo for the final out in Game Four.

Hopefully that will not prove to be the final World Series at-bat of Cabrera’s wonderful career.