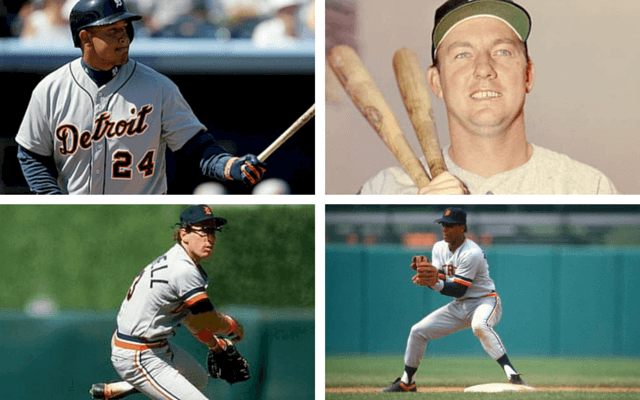 According to new rankings on a baseball history website, Miguel Cabrera, Al Kaline, Alan Trammell, and Lou Whitaker all rank in the top twelve at their positions in baseball history.

There’s no end to the lists you can make and people eat them up.

Sports fans love to argue over who was the fastest, the greatest, the most clutch, etc. Sit in any bar and simply ask, “Magic or Bird?” or “Mays or Mantle?” or “1984 Tigers or 1968 Tigers?” A spirited debate is sure to ensue.

Because of the long history of the game as America’s National Pastime, baseball lends itself to these debates more than any other sport.

The folks over at WahooSam.com have released their list of the greatest players in baseball history at each position. The top 50 to be exact. Many are former Tigers. The website also has a list of the Top 100 baseball players of all-time, which of course includes many former Detroit ballplayers.

Here’s a rundown of where the Tigers are ranked in the WahooSam.com player rankings.

The Tigers have a long history of fine catchers. Cochrane had his best seasons in the uniform of the Philadelphia A’s, but his leadership was important in bringing the first world championship to the Tigers. Of the catchers who spent most of their career in Detroit, the best was Freehan, but Parrish wasn’t far behind. The difference is a slight edge to Freehan behind the plate and the fact that Parrish was essentially a power hitter, while Freehan hit well in the 1960s when offensive numbers were suppressed.

The most interesting thing here is where Miggy will end up. He’s 33 years old in 2016 with probably another 5-7 years ahead of him. Even though he’s shown a proclivity for leg and back injuries, they haven’t hampered him to the point yet where it’s sapped him of his skills to hit a baseball. As long as his body allows Miggy to swing a bat, he’ll be one of the best hitters in baseball. It’s not unreasonable to see him finishing with somewhere around 600 home runs, 2,000 runs batted in, 3,400 hits, and a career batting average between .310 and .320. If so, he’ll squeeze himself past a few first basemen and find himself in the top five all-time. Considering the talent at that position historically, that’s amazing.

At his peak York was one of the top sluggers in baseball, but he didn’t have enough years to accumulate the numbers to get higher on the list. Blue is an overlooked ballplayer from the 1920s who hit .300 and also walked a lot. He was also a good defender, sort of like a Mike Hargrove or lesser Keith Hernandez of his era.

A few of the second basemen that WahooSam.com has Whitaker ranked ahead of: Roberto Alomar, Craig Biggio, Bobby Doerr, Billy Herman, Nellie Fox, Tony Lazzeri, Johnny Evers, and Bill Mazeroski. All of those players are in the Hall of Fame, while Sweet Lou didn’t even earn a second ballot look by the Hall of Fame voters. Travesty.

Kinsler is 24th and sure to rise. The thing about middle infielders is that most of them are done being productive players by 32 or 33. Kinsler is 34 in 2016 and having one of his best seasons as I write this. If he can add one or two m ore years of decent play to his ledger, he’ll inch up among the top 15.

I was surprised that Bush was ranked that high. He certainly has been forgotten after so many years. He was a tough little leadoff man who hit a lot of singles and stole a lot of bases in front of Ty Cobb and Sam Crawford during the deadball era.

Wahoo Sam has Trammell rated just ahead of Derek Jeter, and ahead of Barry Larkin. Trammell got 15 chances on the writers’ ballot but he never got enough support to get into the Hall of Fame. That will probably change once he’s on the veterans’ ballot.

It’s easy to forget how good Evans was before he became a Tiger. He was a very good defensive third baseman in the National League for about 12 years before inking a free agent deal with Detroit in the 1983 offseason. His blend of power and patience at the plate was very effective. Wahoo Sam has Evans ahead of Ron Cey and Matt Williams, two players who got more publicity in the same era.

Kell suffers on this list because most of his value was in his glove and a high batting average, but he didn’t have home run power and his peak was pretty short. I don’t have a problem with his placement at 38th among the top 50 third basemen of all-time.

People tend to forget about Goose Goslin, and that’s a shame. He was a hard-hitting slugger who lived to drive in runs. Think about how many great left fielders there have been, so 11th is pretty good. The guys ahead of him: Ted Williams, Barry Bonds, Musial, Rickey Henderson, Yaz, Raines, Al Simmons, Delahanty, Shoeless Joe, and Rose.

Great to see Bobby Veach get some love on the list. He was the quintessential underrated ballplayer.

Manush is in the Hall of Fame solely because of that gaudy batting average but there are a dozen non-Hall of Famers who had better careers, including Luis Gonzalez, who was briefly a Tiger and is ranked 28th.

Willie Horton is 58th, and I think he could have been placed a little higher.

A lot of Tigers on this list. Cobb rates behind Willie Mays, which is acceptable, unless you’re old, old. old school and really like the deadball era players.

It’s weird to think of Granderson as being on this list, it seems like just yesterday that he was a young player exciting us as the ’06 team made an unlikely run to the pennant. He’s 35 (as of 2016) and won’t add much to his case, but Grandy could inch up into the 30s before he’s done.

A total of eight former Tigers are in the top 50 among the right fielders, led by Al Kaline.

They have Roberto Clemente just ahead of Kaline, which is fine. The two are very, very close. Clemente wins the peak argument (though not by much), while Kaline comes out ahead on career value. It’s very close.

Heilmann ranks ahead of Larry Walker and Tony Gwynn, which might surprise a lot of people. He was a great hitter.

Juan Gonzalez is 50th, so that’s a ninth former Tiger (though Detroit fans prefer to forget that he ever played for the team). Roy Cullenbine is among the honorable mentions.

Only two Tigers in the top 50 all-time at starting pitcher. I’d imagine if Justin Verlander is able to add on some numbers for another five years or so he might scratch his way onto the list. It’s a tough task, we’re talking about the fifty best pitchers in history.

It surprised me to see Bunning ranked so high. He’s an overlooked star.

More former Tigers than I would have expected, but a few of these pitchers only have a very thin connection to the franchise.

Hiller is so underrated, just look at his stats and you’ll be amazed at how good he was. Al Benton was one of the fee relief specialists of the 1930s and he did a fine job for the Tigers and Senators. He was on the ’35 World Champs.

I don’t have a problem with any of the players rated ahead of Cobb, who when he retired was considered by most to be the best player in history.

I think Trammell rates twenty places ahead of Whitaker because the people doing the rankings were trying to slot players by position. Otherwise the top 25 players would mostly be first basemen and corner outfielders and so on.

How high can Miggy go? Among players of the last 40 years there are only a handful who are in his class: Barry Bonds, Ken Griffey Jr., Albert Pujols, and maybe Frank Thomas.