No pitcher ever dominated the Tigers like Bob Gibson 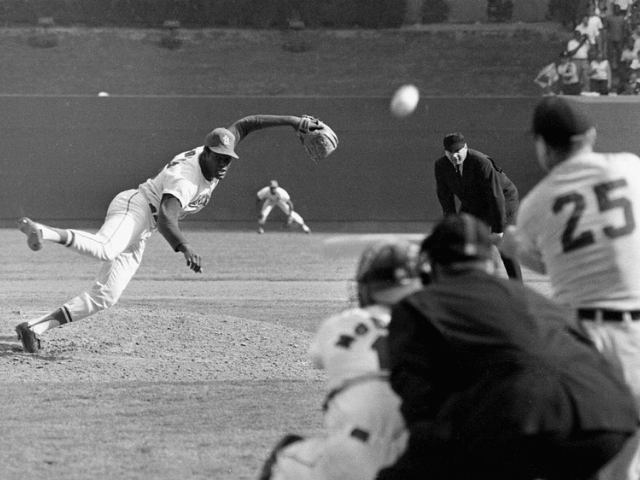 Boy, it’s been a tough year. Late on Friday we learned that Hall of Famer Bob Gibson died at the age of 84. He joins Al Kaline, Tom Seaver, and Lou Brock, baseball legends who also passed earlier this year. Kaline and Brock were in uniform in the 1968 World Series when Gibson manhandled the Detroit Tigers in the opening game in St. Louis.

In all the years and over all the games the Tigers have ever played, that pitching performance by Gibson in the ’68 Series stands out as the greatest by an enemy pitcher.

“[Gibson] was the whole story,” Detroit manager Mayo Smith said immediately following the contest. “That’s the best I’ve ever seen him. He’s the whole story, I don’t see why you [reporters] even came in here.”

Ol’ Mayo was correct: the headlines after Game One could have simply read “GIBSON” for all it mattered.

In the Cardinals 4-0 victory, the tall right-hander struck out 17 Tiger batters. Yes, 17, a World Series record that still stands and may stand forever.

“If I ever have to face him again, I’d like to retire,” Detroit first baseman Norm Cash said, after fanning three times against the National League’s best and fiercest pitcher. Both Cash and Kaline struck out three times, and every one of Detroit’s nine starting players fanned at least once against “Gibby.” Twelve of the K’s came on swings, six came with the batter fooled and looking, and one came on a third strike bunt.

Here in Michigan, all these years later, we can chuckle about the strikeouts and the lost game. We know the Tigers came back to win that World Series in seven games. But, for one game, for one glorious afternoon, the Detroit Tigers and their fans, and the rest of the baseball world, witnessed a brilliant pitcher make a big league lineup look foolish.

Gibson was blessed with amazing athletic ability. He set a state record in the broad jump as a high schooler in Nebraska. He was an excellent basketball player, and had he wished, could have been a star in the NBA. A tall, lean forward, Gibson was a great basketball player for Creighton University, setting school and league records in points and rebounds. He played briefly for the Harlem Globetrotters. But baseball was his favorite sport, and when he was on the mound, Gibson was the focus of attention.

When Gibson clutched the baseball and prepared to pitch, he was an intimidating presence. He approached Game One of the ’68 Series with added incentive. Prior to the series, Detroit’s Denny McLain bragged to the press that he was going to take down the vaunted St. Louis lineup. “I don’t want to just beat the Cardinals,” McLain said, “I want to humiliate them.”

That sort of bulletin board material only riled up Gibson, who wasn’t a happy man on the field anyway.

“Bob wasn’t unfriendly when he was playing,” teammate Joe Torre said, “I’d say it was more like hateful.”

Gibby was in full-on hate mode for the Series opener against the AL champion Tigers. The Cardinals were overwhelming favorites, and reigning champions. The previous autumn, Gibson had started, completed, and won three games in the World Series against the Red Sox. including Game Seven. He was on a five-game Fall Classic win streak when he took the mound to face the Tigers on October 2.

There are 27 outs in a baseball game. Gibson got 17 of them by strikeout that afternoon against the Tigers, who felt overmatched. Only 14 times did the AL champs put a ball in play, including five hits. In the second inning, Gibson struck out the side on 11 pitches. He struck out two batters in the first, and two batters in the third, sixth, and seventh innings. In the ninth, after Mickey Stanley stroked a single to center field, Gibson reared back and struck out the final three batters of the game: whoosh, whoosh, whoosh!

“I wouldn’t want to compare,” Kaline said after the game when asked to measure Gibson to pitchers he’d seen in the American League. “But I’ve never seen anyone like him.”

When Bob Gibson pitched he didn’t just send the baseball toward home plate. It seemed as if he was flailing his entire body at the frightened batter. His right, trailing leg, would whip around his body, often perpendicular to the ground. The momentum from the force of his arm action would frequently send Gibson hurtling toward first base.

And what did the batter get from all that motion? A chest high fastball as fast as anyone in the game, a curve that dove down from “12 o’clock to 6 o’clock,” and a nasty slider that was unusual in the game.

Gibson possessed one of the earliest and best “backup sliders” in the game. A backup slider starts off the plate, inside on a right-handed hitter, but slides over the inside part of the plate in the last few feet. Gibson used his backup slider to strike out Willie Horton in the second inning and again in the ninth for the final out.

“I never knew what he was doing, I was lucky to put the bat on the ball,” Horton said.

The Tigers rebounded to win the 1968 Series, but not before Bob Gibson beat them again in Game Four, striking out 10 more. The Detroit lineup felt only a little more comfortable, and by Game Seven the confidence was there to battle against the best the other league had.

But for one game, played 52 years ago to the day that Gibson died, the tall, menacing righty from Omaha dominated the Tigers better than any pitcher ever has. For that afternoon and many others in his Hall of Fame career, Bob Gibson was the king of the hill.

Watch Game One of the 1968 World Series between the Tigers and Cardinals, when Bob Gibson struck out 17 Detroit batters: