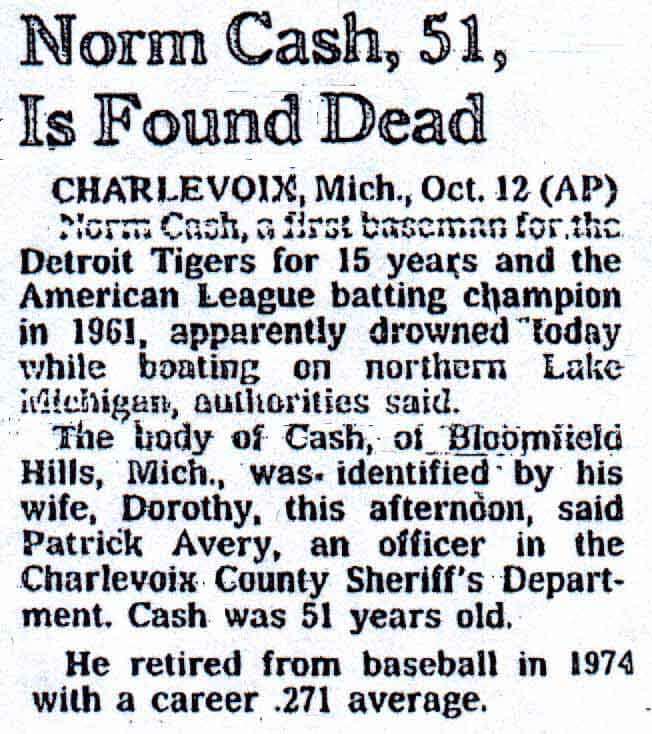 We live in an era of conspiracy theories. Search for “Mandella Effect” online and see what you come up with. Prepare to spend a while sifting through bizarre theories about popular culture and parallel universes. (Don’t blame me, I didn’t come up with this nonsense.)

It’s with that caveat that I report here on a theory that has been kicking around for decades. Was former Tiger star first baseman Norm Cash murdered? At least a few investigators and crime researchers think it’s possible.

Let’s recap briefly the life and career of Norm Cash. Born in Texas in 1934, Cash was a mid-level prospect when the White Sox inked him to a contract as an amateur. For a while it appeared that his fortunes would be better on the gridiron: he was drafted as a fullback by the Chicago Bears but declined to pursue a football career. The broad-shouldered Texan with a toothy smile was muddling around in the White Sox organization as a ho-hum first baseman when he was dealt to the Indians during the winter meetings in 1959. Before he could play a single inning for Cleveland, the Tigers acquired him a trade in the final week of spring training in 1960 for Steve Demeter. The deal marked the turning point of Cash’s baseball career and one of the best in franchise history.

The Tigers liked Norm’s lefthanded power swing, especially in friendly Briggs Stadium (soon to be renamed Tiger Stadium). The first sacker beat out Steve Bilko for the starting job and smacked 18 homers in his Detroit debut season. The following season Cash shocked the baseball world when he won the batting title with a .361 average and also hit 41 homers and drove in 132 runs. He led the league with 193 hits and also paced the AL with a fantastic .487 on-base percentage. The sky seemed to be the limit for the new Tiger star who was still just 26 years old.

Cash sank to a .243 mark in 1962, the 118-point drop the largest ever by a batting title winner, but his batting average was never the true measure of his value. Cash’s power stats were among the best for the 1960s: he averaged 27 homers and 81 RBIs through 1972 while solidifying the middle of the Detroit order which also included Al Kaline, Willie Horton, Bill Freehan, and Jim Northrup. In 1968 he kept the clubhouse loose with his sense of humor and hit 25 homers as the primary power threat from the left side of the plate for Mayo Smith’s team. The Tigers captured the World Series in seven games, with “Stormin’ Norman” supplying 10 hits (.385), a homer, and 5 RBIs in the series.

Cash ended his career with 377 homers, a figure that ranked among the top five among lefthanded batters in American League history when he retired in 1974. He rates in the top ten in nearly every statistical category for Detroit hitters.

In retirement, Cash forged a career as a broadcaster thanks to his fun-loving personality and homespun Texas sayings. He was a beloved figure among fans of the team and improved steadily in his role as an observer of the game from the booth. He was so popular that he garnered a contract with ABC for Monday Night Baseball. He later worked on cable TV for Tiger telecasts. For a few years, Norm continued to swing the bat, playing and starring in a professional slow pitch softball league for a successful team in Detroit (owned by pizza magnate Mike Ilitch). One season he reportedly hit over .800 and slugged more than 20 home runs in fewer than 40 games.

On the morning of October 12, 1986, Cash’s body was found in the water near Beaver Island, located in Lake Michigan in the northern lower peninsula. An autopsy later revealed that Cash’s blood alcohol level was 0.18 and that he’d suffered a blow to the head. The former Tiger star was dead at the age of 51. Authorities pieced together the story and it went something like this: Cash was on the island at a condominium he owned with his wife Dorothy. A friend was also with the couple. Somewhere around midnight on the 11th, Cash left his wife and friend to go to his 33-foot cabin cruiser docked on Beaver Island. The weather was messy with rain, fog, and damp conditions. A witness said the dock where Cash’s boat was moored was not in good repair. Cash was wearing cowboy boots when he was last seen. According to police, Cash slipped on the dock and hit his head, spilling into the cold water in the dark. The cause of death was drowning.

But not everyone believed that story. The Cash’s friend insisted that Cash was not drunk and that he was strong enough to pull himself from the relatively shallow water. The injury to Cash’s head may not have been consistent with an accident. At least one person was sure that there was foul play involved.

According to author Karl Niemiec, former Lions lineman Alex Karras told him a different story about Cash’s demise. He wrote:

Alex, just looked at me, his eyes saddening. I could tell he knew Norm Cash well. Maybe knew more than he wanted to know about him. After a moment of silence, he said, “They killed him, you know. They hung him over the boat, filled his cowboy boots with water, and let him sink. Gambling debt. He owed the wrong kind of people more than he could pay back. So they killed him.”

At the time of Cash’s death, Karras was part owner of the famous Lindell AC bar in Detroit, a frequent hangout for Detroit athletes and shady characters as well.

There’s never been any credible evidence to support the story relayed by Niemiec from Karras (allegedly). There’s no reason to believe that Norm Cash died for any other reason than he slipped on a wet dock  and fell into Lake Michigan. It’s the most likely explanation, which doesn’t make it any easier to accept. Cash was an important and popular figure in Detroit history, and we were robbed of having him around for many more years.

“When you mention Norm Cash, I just smile”, said Al Kaline, who had a locker adjacent to Cash’s for years. “He was just a fun guy to be around and a great teammate. He always came ready to play.”