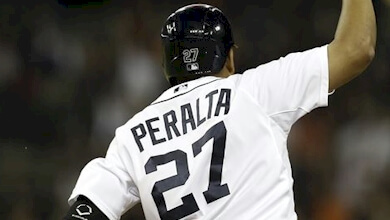 Of all the outlandish things that happened during the steroid era, Jhonny Peralta’s impact on the 2013 postseason was one of the most embarrassing.

The fallout from this incident, and what it helped put into motion, led to the end of the Leyland Era of Tigers baseball. The franchise has been searching for a compass ever since.

For those of you with short memories (or maybe you’ve been blocking it out), the Detroit shortstop was suspended for 50 games after failing a drug test during the 2013 regular season while his team, the Detroit Tigers, were in a battle for the division title. Peralta came back for the final weekend of the regular season, but his bat really came alive in the playoffs.

Peralta, he of the misspelled first name, chose all the letters correctly in “C-L-U-T-C-H” and hit a crucial home run in a must-win Game Four victory in the Division Series against the Oakland A’s. It was Peralta’s fourth homer in his previous eight post-season games for the Tigers. And despite the cheating, most fans were willing to hold their noses and accept Jhonny’s Pherformance. The next night, Justin Verlander manhandled the Athletics and advanced the Tigers one step closer to the Fall Classic.

In the subsequent AL Championship Series, Peralta continued to provide power. The husky right-handed slugger hit two doubles and drove in a run in Game One against the Red Sox, which Detroit won 1-0. Three nights later, he hit another double in a heartbreaking 1-0 loss in Game Three. Of all the Tigers, Peralta was swinging the most dangerous bat in the lineup.

The Tigers, with a star-filled pitching rotation that included Verlander, Max Scherzer, and Rick Porcello, all of whom had won or would win Cy Young Awards, seemed poised to roll to their second straight pennant and finally recapture the championship that had not been theirs since 1984.

But the baseball gods would have none of it, and in Game Two at Fenway Park, David Ortiz was allowed to blast a grand slam into the bullpen that eluded Torii Hunter, thrilled the Boston crowd, and swung the series in favor of the Bloody Hose. The Tigers lost the series and in essence their little mini-dynasty was over. The following year Peralta was in a St. Louis uniform where he once again was a bad luck charm as the Cardinals succumbed to the Giants in the Championship Series.

Peralta played his last game for the Tigers in that crushing ALCS loss to Boston in 2013. Of all the Detroit teams of the 21st century—the 2006 team, the 2011 division champs, the 2012 team that went to the World Series—the ’13 team was the most talented and the best situated to become champions. That season it didn’t matter who was coming out of the American League, they were going to cast aside the lesser Cardinals in the Fall Classic. Precisely two weeks after Big Papi hit his epic four-run homer off Joaquin Benoit over the short fence in right field in Game Four, the Red Sox were crowned champs.

Oh, that could have been the Tigers.

Was someone somewhere punishing the Tigers for Peralta’s misdeeds? Probably not, since such karma is rarely that simple. Who among the Sox was chewing Jose Canseco Vitamins? Likely a few on their roster, maybe even Ortiz.

Still, the odd and sordid way Peralta was less-than-severely-punished for his failed drug tests cast a long shadow on the 2013 Detroit team. What might have happened had Jhonny been in the lineup for the nearly two months he was suspended? Would Detroit have been better prepared? What about the feelings of his teammates? Verlander famously tossed the shortstop under the bus.

“I know I’m disappointed,” the right-hander said shortly after the news broke that the team was losing Peralta. “This has no place in our game, on our team. We’re better than that.”

Yet Detroit wasn’t good enough, and they were none to happy with Peralta, even if the front office put on a brave face. Famously, the stunning loss to the Red Sox in an ALCS where Detroit starting pitchers posted a brilliant 2.06 ERA and took a no-hitter into the eighth inning twice, led the Tigers to rip the club apart in the off-season.

The day after the World Series, Peralta became a free agent, and less than a month later he signed a contract with the Cardinals. A few days before Thanksgiving, the Tigers traded slugging first baseman Prince Fielder to the Rangers for second baseman Ian Kinsler. The pitcher who surrendered the fateful grand slam, Benoit, he also left as a free agent. Even the vaunted rotation was split up when Long Tall Doug Fister was dealt to the Nationals.

The big blow came in November, before the winter meetings, when Jim Leyland announced his retirement as manager. His contract having expired, Leyland walked away after having rekindled the Detroit franchise and winning three consecutive division titles. Things would never be the same.

Under a new manager in 2014, the Tigers won a fourth straight division crown. But Peralta’s cheating and suspension, the Big Papi grand slam, and Smoky Leyland’s exit were the real curtain-closers on the Detroit dynasty. That window was closed, and it’s never really been cracked open very far since.