Polanco carried the torch for all the little guys 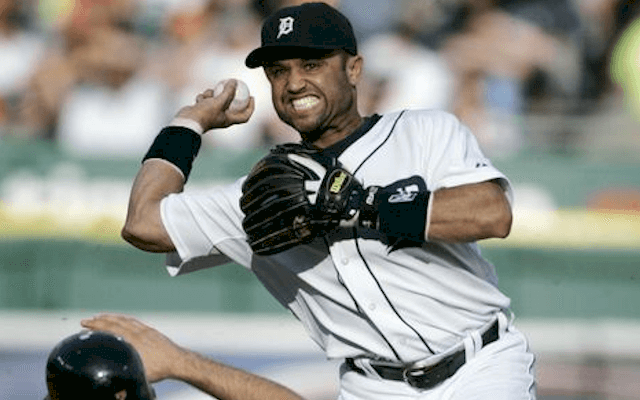 Second baseman Placido Polanco won two Gold Gloves for the Detroit Tigers and hit .311 in his five seasons with the team.

You know when you’re growing up and you try to mold your game after a professional athlete? That was me playing baseball when I was in the seventh and eighth grade at St. Thecla Catholic School in Clinton Township, Mich.

And the guy who I idolized and molded my game after was the “diminutive” but always steady Placido Polanco. My love for the career .297, prototypical two-hole hitter formed soon after he was acquired by former Tigers’ president and general manager Dave Dombrowski from the Philadelphia Phillies in June of 2005.

In a way, Polanco was a great birthday present for me — the two-time All-Star was acquired on June 8th, which happens to be the day before my birthday. I guess it was fitting that he ended up being my favorite Tiger from the time he joined the club until the day he left via free agency in December of 2009.

Before little Placido arrived in Motown, I would often sit at home and wonder if I was good enough to hang with the bigger guys on my team.

I’m not even five feet tall now. So, at that point, which was before I experienced my “extremely impactful” pre-high school growth spurt, I was the absolute definition of a diminutive-sized middle schooler.

Watching him smoothly man second base at his 5-foot-9 stature gave me hope that I could do the same at about a foot and a half less for St. Thecla.

Every time I turned a double play or “lazily” hit a ball into shallow center field, I felt like Polanco, my Tiger of choice during Detroit’s magical run to the Fall Classic in 2006.

As a fellow right-handed hitter, I even crafted my batting stance after the ’06 ALCS MVP. With me being a little guy, my dad, who served as at least an assistant coach on each of my youth baseball teams, constantly preached to me the importance of choking up on my bat in order to get around on faster pitches. I’m not going to say that I didn’t take heed to my father’s advice. However, with no intended disrespect to the man who helped raise me, I don’t remember feeling totally comfortable about choking up until Polanco came to town.

And soon after he arrived, Polanco helped deliver one of the most memorable moments of the 2005 campaign.

It came on Sunday, June 19, which happened to be Father’s Day.

It was the first national holiday since he had arrived to Motown, and he made an impact on that day’s game in a big fashion.

The Tigers were in the middle of an interleague series with the San Francisco Giants, and already had taken game two of the three-game set.

It looked like the Tigs were going to drop the series, as they trailed 8-5 going into the bottom of the ninth.

This was the case until now-Fox Sports Detroit analyst Craig Monroe hit a sacrifice fly, which was followed by a game-tying, two-run home run from “Big Red” Chris Shelton.

The game remained tied until the bottom of the 10th inning when Polanco came to the plate. Polanco connected on a fastball from then-Giants reliever Scott Eyre and proceeded to hit it over the wall in left-center field at Comerica Park.

His first home run as a Tiger was just the Father’s Day gift that my dad and many other proud dads and Tigers fans were looking for.

For Detroit fans, Polanco was no longer an unknown commodity, and his impact continued to be felt the rest of the ’05 campaign.

In those 86 games, he also recorded a team-high 4.3 wins above replacement, according to Baseball-Reference.

What this all should tell you is that he made one heck of a first impression in Detroit. He’s perhaps known best for his happy circuit of the bases in front of Magglio Ordonez when the latter hit a pennant-winning homer in the 2006 ALCS. Polly’s waving arms and big smile were a perfect exclamation point on a tremendous series for the Tigers.

And most importantly, I can gladly say that through his great first impression and all of his accomplishments as a Tiger, he brought my love of baseball and of playing second base to an even higher level.