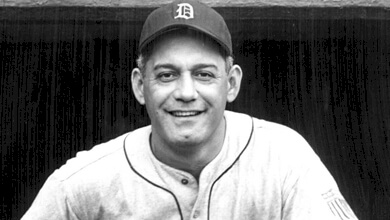 Hard-drinking, Hawaiian-born Prince Oana appeared in 13 games as a pitcher for the Detroit Tigers in 1943 and 1945.

Before there was Prince Fielder, the Tigers’ “other” prince was Henry “Prince” Oana. He was one of the team’s few Hawaiian-born players, and he also played a very significant role in baseball history, if only as a footnote.

Prince Oana was born either in 1908 or 1910, on the island of Oahu. His pro baseball career began in 1929. Splitting the season between the Globe Bears of the Arizona State League and the San Francisco Seals of the Pacific Coast League, Oana showed promise at the plate, hitting .374 with 18 home runs.

Within a few short years, he had established himself as one of the best young hitters on the west coast. At 6’2” and 193 pounds, he was as strong as the proverbial ox. As an outfielder, however, he would never be more than shaky.

Oana’s biggest problem was that he drank too much. It eventually began to affect his play on the field. By 1932, he had slumped to .239. Oana blamed his struggles that year on vision problems resulting from a previous football injury. But Oana often arrived at the ballpark hung over, and sometimes didn’t show up at all.

One of Oana’s teammates on the 1932 Seals was Vince DiMaggio, who had a younger brother named Joe. The DiMaggio’s were local kids; the 19-year-old Vince was in his first year with the Seals, while Joe, two years his junior, was still just a raw semi-pro player with a growing reputation as a heavy hitter. Joe played shortstop back then, and while he was solid with the glove, his throws to first were always an adventure.

Here’s where Oana’s brush with history comes in. With three games left in the 1932 season, Oana approached the Seals’ manager, Ike Caveney, about leaving early to go on a barnstorming trip in Hawaii. He also wanted to bring along the team’s shortstop, Augie Galan. (Barnstorming was when, in order to pick up some additional money during the offseason, players would loosely organize into teams that travelled the country’s backroads, playing before crowds in small towns that had never seen major league baseball before. Once television came along, barnstorming gradually vanished.)

Caveney wasn’t thrilled with the whole idea of two of his players bolting the team before the season was over. “Who’s going to play short?” he asked Oana.

Oana’s response to this question is lost to history. But whatever it was, it must not have been sufficient, because it was at this point that Vince DiMaggio, who’d been eavesdropping on the conversation, suddenly butted in. “I’ve got a kid brother who’s a shortstop, and a good one!”

And so it was that the young Joe DiMaggio played in the Seal’s final three games in 1932, even collecting a couple of hits. In fact, he impressed Caveney so much that he was invited to spring training the next year, and made the team. All he did was hit .340 with 45 doubles, 13 triples, and 28 home runs with San Francisco in 1933. He also had a 61-game hitting streak. Joe DiMaggio later became one of the greatest Yankees ever (as an outfielder, not a shortstop).

As for his brother Vince, he hit .333 while splitting time with San Francisco and the PCL’s Hollywood Stars. He went on to play ten years in the majors with Pittsburgh, Philadelphia, Cincinnati, the New York Giants, and the Boston Braves.

Augie Galan, meawhile, hit .356 with the 1933 Seals, his final minor-league season before he began an all-star career with the Chicago Cubs and Brooklyn Dodgers. Galan, by the way, was the shortstop on the Cubs squad that squared off against the Tigers in the 1935 World Series.

And whatever became of Prince Oana? He played the 1933 season with the PCL’s Portland Beavers, hitting .332. He cracked the big leagues with the Philadelphia Phillies in 1934, appearing in six games and going 5-for-21.

But after that, Oana was a career minor leaguer, despite being a solid hitter. He likely never would have made it to the majors again if he hadn’t decided to try his hand at pitching while in his early 30’s.

After winning 16 games with the Fort Worth Cats of the Texas League in 1942, he earned a promotion to the Tigers the following year. With major-league rosters depleted as a result of World War II, teams were often forced to make due with marginal players. Oana, a right-hander, got in ten games with Detroit in 1943, winning three with an ERA of 4.50. He even batted .385 with one home run.

He also appeared in three games for the Tigers in 1945, including the only major league start of his career. It came on September 12 against the Philadelphia Athletics. He had a one-hitter going, but with two outs in the ninth inning and a three-two count, Bobby Estallela doubled in the tying run. Oana stayed in the game before being pulled in the 12th inning, and the Tigers eventually lost in the 16th.

Detroit went to the World Series that year, and although Oana wasn’t on the postseason roster, he was awarded a ring after the Tigers beat the Chicago Cubs (possibly or possibly not with the help of a Billy Goat Curse).

Oana spent the next several years toiling in the minors, including a 24-win campaign with the Texas League’s Dallas Rebels, before hanging it up.

Oana’s role in baseball history is largely forgotten. But if it hadn’t been for him, who knows if we would still remember the name of Joe DiMaggio?