Rating every trade made by Dave Dombrowski with the Tigers

On Tuesday night while the Detroit Tigers were in a rain delay at Wrigley Field, the Boston Red Sox announced that they had hired Dave Dombrowski to be their president of baseball operations. As a result, a period was placed at the end of the final sentence on an amazing era in Detroit Tiger history.

In his 13+ seasons in Detroit, Dombrowski rebuilt, reshaped, and remade the Tigers into one of baseball’s most successful franchises. The team went to a pair of World Series and advanced to baseball’s “final four” (the League Championship Series) four times. From 2011-14, the team reigned supreme over the AL Central division.

Yet, despite that tremendous success, many fans blame Dombrowski for the team’s failure to win a world championship. It’s obvious that owner Mike Ilitch does—he fired DD on August 4th after the Detroit exec emptied the Tiger roster of three pending free agents in a fire sale this town hasn’t seen in a very long time. Under Dombrowski the Tigers were headline grabbers for getting players, not for shipping them away.

But the criticism of Dombrowski is grossly unfair. Sure, the bullpen has been a headache for years and a sore point for an otherwise excellent club. Sure, the team played abysmally in their two World Series appearances. But Dombrowski made the Tigers relevant and he put a good enough roster together in most seasons that Detroit was often a favorite to get to the Series. In modern baseball, winning in the postseason can be a crap shoot.

No, the Tigers didn’t win a title with DD at the helm, but his moves were often genius to the point that they bordered on criminal. He grabbed players from other teams and rarely gave away anything of significant value. While the Tigers kept winning, the players the team traded away (often young players) were rarely if ever missed.

Is it possible to persuade skeptical Detroit fans that Dombrowski was a great front office leader? And if so, how?

I decided to look at every trade that Dombrowski ever made in Detroit. I rated them based on what the Tigers got and what they gave up. For the sake of ease I used WAR (wins above replacement) to rate the trades. WAR is a single number and it makes it easy to judge relative value between players at different positions. The WAR listed is what the players did after Detroit received them or after they were dealt away, regardless of where they later ended up. 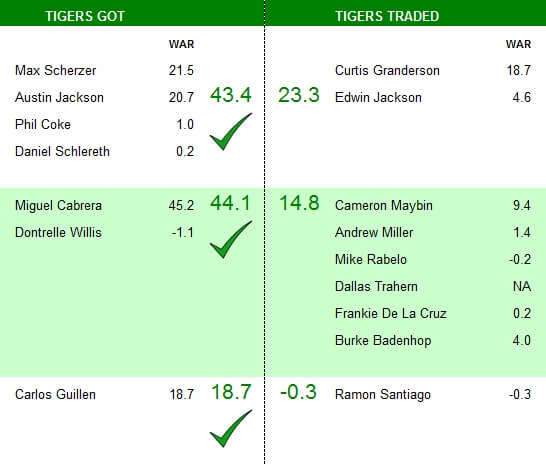 These are the trades that essentially built the foundation on which the Tigers dominated their division for four straight seasons. The Cabrera deal, obviously, was highway robbery. Maybin is still playing, but Miggy is the best hitter of his generation. Many Tiger fans still like to whine about losing Granderson. But clearly, that deal was heavily lopsided in Detroit’s favor. DD saw that Granderson was going to be a one-dimensional player who couldn’t handle center field for the longterm. Scherzer alone almost delivered enough as a Tiger to offset what Granderson did after leaving Motown. The Guillen trade was a big part of getting the Tigers to the Series in ’06 and Carlos had many fine seasons in The D, while Detroit gave up a backup infielder to get him. 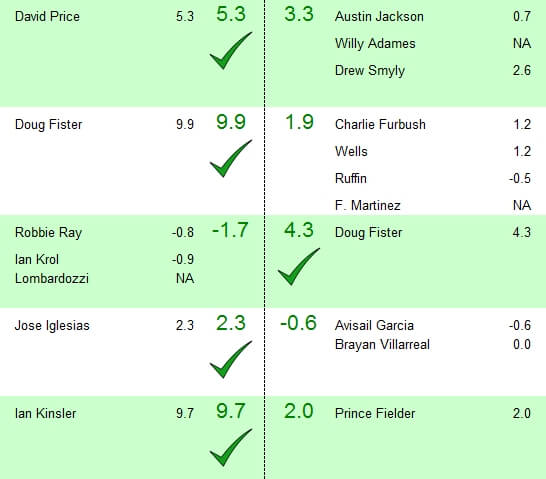 Here are five more recent deals, and Dombrowski again exhibits his acumen. Fister was stolen from Seattle and his best seasons came in Detroit. Yes, it was frustrating to lose him for nothing to the Nats, but Fister is probably done now (Washington has relegated him to the bullpen) and anything Detroit does lose will probably be offset by what Fister did in a Detroit uniform. The Price deal was a great short-term move that the Tigs needed to make to go for a ring in 2014. Jackson was most likely going to leave eventually via free agency, but the loss of Smyly might hurt longterm (though he’s injured now). Iglesias plays shortstop which means he should accumulate more value over the length of his career than right fielder Garcia will. And Kinsler for Fielder undid a bad free agent deal that the owner really wanted. I fully expect that five years from now that trade will be a 28-14 type win for Detroit. Kinsler will keep piling on value while Fielder rapidly declines. 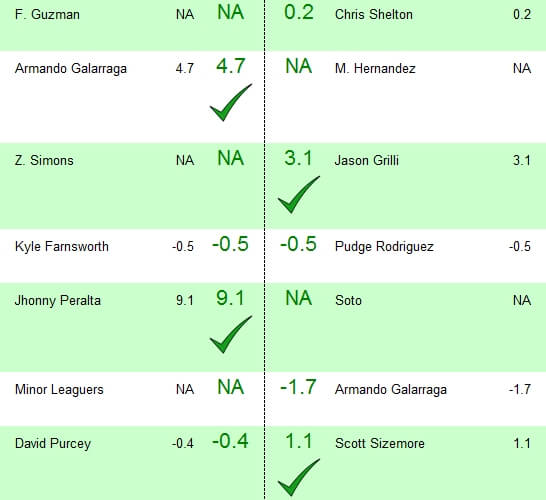 A mixed bag here, but the Peralta and Galarraga deals were pretty nice wins for Dombrowski and the Tigers. The others are pretty unimportant, except for the loss of Grilli, who became an All-Star closer for the Pirates for one season.

This group includes most of the worst trades Dombrowski ever made, but even those aren’t terrible. Infante earned those 10 WAR over several seasons and ended up back in a Tiger uniform. Jurrjens became an All-Star starter for the Braves but it appears his career is over now after several injuries. 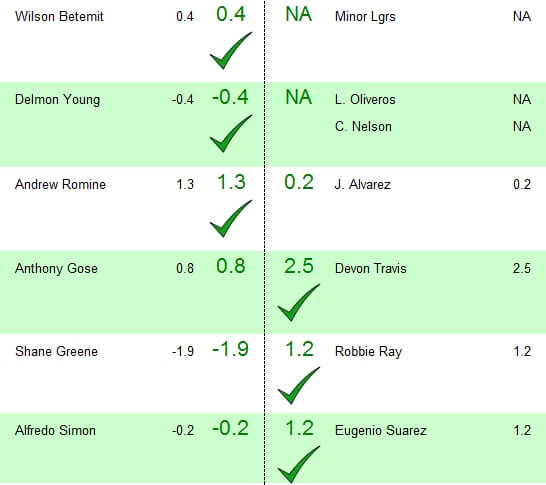 The thing about looking at every trade is that you’ll have a lot of them that resulted in little or no value for either team. That’s the way the first three trades in this group panned out, though Delmon Young (hate him or not) had some very key hits for the Tigers when they made their run to the World Series in ’12. The last three trades could potentially haunt the Tigers, though I think it’s likely only one of them will be a that bad. Travis and Suarez both look like they’ll have long careers as middle infielders. It’s still possible Greene or Simon will turn out to provide some value over time. 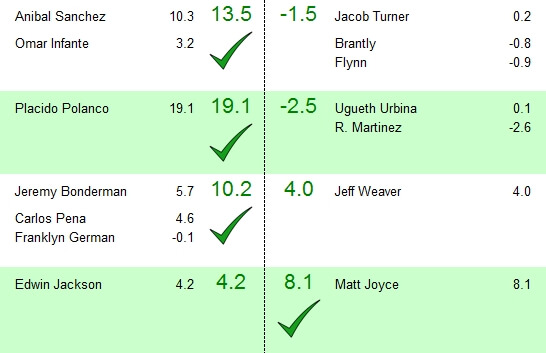 Here are four important deals, three of which Dombrowski shrewdly came out on top of. Using the lure of prospects he re-acquired Infante and snatched Sanchez away from the Marlins for the stretch drive in 2012. Polanco was an absolute steal (Urbina was in prison shortly after this deal). It’s easy to forget that the Weaver trade was very unpopular at the time, but Dombrowski got three players and two of them did pretty well, while German was spun in another trade. Joyce has carved out a pretty good career as a corner outfielder but it’s not a deal anyone is fretting about too much, and Jackson did give Detroit an All-Star season in 2009. 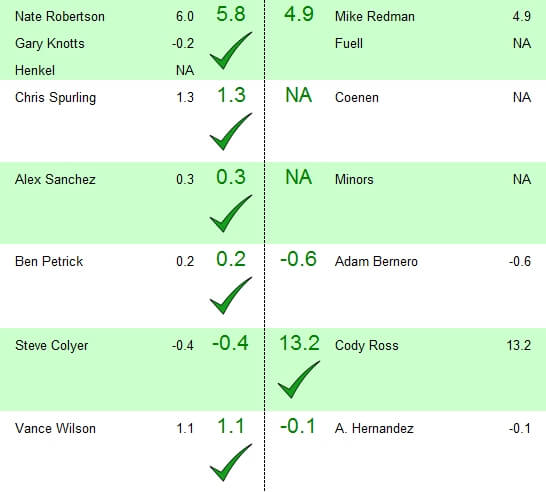 We’re looking at every trade made during the Dombrowski era where players left or came to Detroit and played any amount of time. As you see, even in the minor deals, DD usually won out. The Cody Ross deal is the worst of Dombrowski’s years in Motown (based on net loss of WAR), and it was one of the first made in his tenure, coming on the eve of the 2004 season.

We’ll need more time to see how these two trades pan out, but so far the Cespedes deal worked out fine, considering how mediocre Porcello looks in Boston. The Price/Soria/Cespedes exit deals made at the deadline this season can’t be evaluated for years. 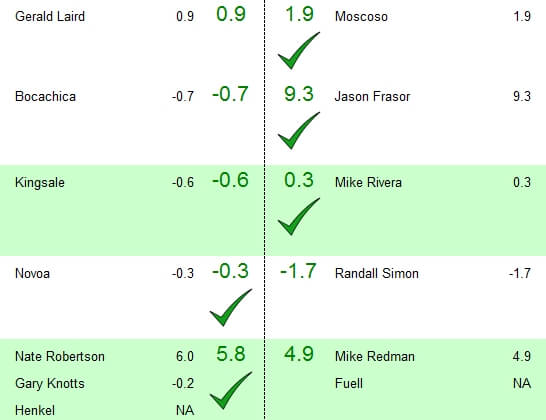 There’s the Frasor clunker, but otherwise these trades are essentially a wash.

After all those trades (every trade that resulted in any significant playing time and/or WAR going either way), here’s the balance sheet. Dombrowski netted the Tigers nearly 100 WAR in his time as top executive of the Tigers. It’s not even close—he was a rousing success.

Think the results are a result of the big trade victories (Cabrera, Scherzer, Guillen)? If we take those three deals away, the ledger still leans in Detroit’s favor, 108 to 81.

If you measure Dombrowski by how well he evaluated talent in trades, he comes out as a huge winner. He brought loads of talent to Detroit and often gave up very little (usually fleecing teams by getting them starry-eyed over prospects).