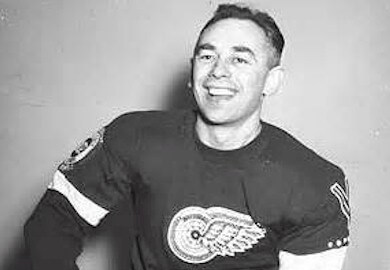 When it came to putting the puck in the net, Bill Hollett was no flash in the pan. In an era that saw defensemen generally stick to their end of the rink, “Flash” Hollett used his sped and playmaking ability to set a handful of scoring records for blueliners. The fact that today he’s not in the Hockey Hall of Fame owes much to the simple passing of time—and perhaps the vindictive nature of Red Wings coach and GM Jack Adams.

Hollett, who was born in 1911 in Nova Scotia, first attracted the attention of Toronto Maple Leafs owner Conn Smythe as a young lacrosse player in the early 1930s. After spending a couple of seasons in the minors, Hollett was loaned to the Ottawa Senators in 1933 before spending the next season and a half with Toronto. The Leafs, loaded with talent, sold the promising young defenseman to Boston for a reported $16,000, a huge sum in the Great Depression.

Brash and abrasive enough to be dubbed “the Dizzy Dean of hockey,” Hollett was a whiz during his eight seasons with the Bruins. The versatile D-man often filled in for an injured forward and skated on a forward line during penalty kills. He was a key member of the 1939 and 1941 Stanley Cup winners. In 1941-42, he scored 19 goals, breaking the record of Harry Cameron of the 1920-21 Toronto St. Patricks. The following season he notched 19 goals to tie his own record. He also racked up 44 points, eclipsing Tom “Cowboy” Anderson’s two-year-old record for most points by a defenseman in a single season. All of Hollett’s records were set in a 50-game season and came at a time when a 20-goal season was considered a big deal for forwards, much less a defenseman.

In January 1944, Hollett was traded to the Red Wings for defenseman Pat Egan. The Wings, defending Cup champions, finished second with the newcomer in the lineup. Hollett uncharacteristically went pointless as the Wings lost to Chicago in five games in the opening round of the playoffs.

In 1944-45, his first full season as a Red Wing, the 34-year-old Hollett became the first defenseman to pot 20 goals. His achievement was helped by a couple of factors: watered-down rosters as a result of World War II, and the recent introduction of the red line, which opened up the game to speed and passing. Nonetheless, even though the NHL was playing a 70-game schedule by 1949, Hollett’s mark would stand for a quarter-century until Bobby Orr broke it in 1968-69. Hollett was named to the First All-Star Team and scored or assisted on seven goals in the 1945 playoffs as the Wings lost in the seventh game of the Finals to Toronto.

Hollett’s third season in Detroit, 1945-46, was his last of 13 NHL campaigns. Beset by knee and groin injuries, he was limited to just four goals in 38 games. During salary talks in the summer of 1946, he publicly feuded with Jack Adams over his request for a $500 raise. “Jolly Jack” traded his disputatious defenseman to the New York Rangers, but Flash refused to report. His wife wanted him to stick closer to their Toronto home, so he retired. He left the NHL with 132 goals and 181 assists for 313 points in 565 regular-season games. At the time, he was the highest-scoring blueliner in league history.

These arguably were Hall-of-Fame credentials. But Adams, one of the most powerful figures in pro hockey, reportedly told Hollett that he would see to it that he never was inducted. Whether this was true or not, it’s a fact that Hollett—who died in 1999, a week after his 87th birthday—is still on the outside looking in.