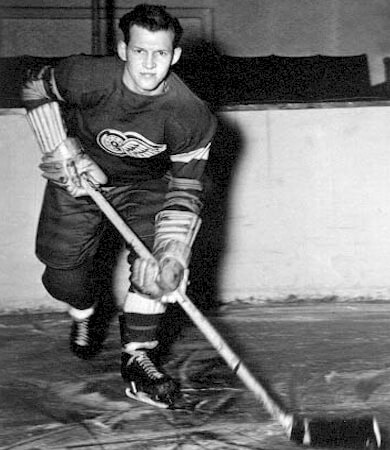 Like any sports league, every season the National Hockey League sees its share of thumpings, blowouts, and scoreboard massacres. After 72 years, however, nothing has come close to matching the historic beat-down the Detroit Red Wings gave the New York Rangers on January 23, 1944.

It remains the most lopsided score in NHL history. In 1920, the Montreal Canadiens had beaten the Quebec Bulldogs, 16-3. Detroit’s 15-0 blowout set new league records for the greatest margin of victory and the most uncontested goals scored in a game. It was small consolation to the Rangers, but it actually could have been worse. A puck that would have made the final score 16-0 crossed the goal line a split second after the game ended and was waved off.

The Rangers had just upset the Maple Leafs in Toronto on Saturday when they arrived at Olympia for a Sunday night game. While the Wings were the defending Stanley Cup champions, the Rangers—who had a record of 6-22-1 going into the game—were destined to finish last in each of the four NHL seasons played during World War II.

Curiously, the score stood at a unremarkable 2-0 throughout the first half of the game. Center Murray Armstrong opened the scoring at 2:48 of the first period, followed by a Bill Quackenbush goal at 18:01. Then, approaching the nine-minute mark of the second period, the Wings scored to make it 3-0. And then they scored again…and again…and again…and again. Before the period was over, Detroit had fired five more goals past Rangers netminder Ken “Tubby” McAuley to build an overwhelming 7-0 lead.

Olympia’s roof caved in on New York in the third period. As 12,293 Detroit spectators howled in glee, the boys in red and white sweaters pumped in goal after goal—eight in all, with left winger Syd Howe alone finding the back of the net three times in the final eight minutes. Howe’s last score was career goal number 149, pushing the veteran forward past Herbie Lewis as the Wings’ all-time goal scorer.

In all, the Wings directed 58 shots at McAuley, who managed to stop 43 of them. Meanwhile, on the other end of the ice, rookie goaltender Connie Dion hardly broke a sweat. Dion, recently discharged from the Canadian army, steered away all nine Rangers shots to record his fifth straight victory and his first NHL shutout.

Nine different Wings scored that night, with Dion and defenseman Cully Simon the only players on the roster not to register a point. In addition to Howe’s hat trick, Armstrong, Don Grosso, and Carl Liscombe each scored twice.

The shell-shocked Rangers, who surrendered a record 6.2 goals per game in 1943-44, didn’t win another game the rest of the season. The string of losses included their next meeting with Detroit, two weeks after the debacle at Olympia. This time the Rangers were slightly more competitive, losing by “only” 10 goals as Syd Howe scored six times in a 12-2 thrashing.