When the Red Wings said goodbye to Olympia Stadium 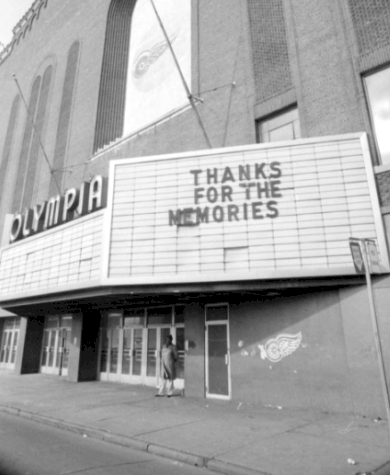 Leading up to that night’s game with the Quebec Nordiques, a first-year expansion team, several Wings players had mixed emotions.

“I like playing here,” said forward Paul Woods. He had become a fan favorite after only two seasons in Detroit. “It’s a great building. I think we’ll feel some sadness in leaving.”

Defenseman Reed Larson was less sentimental. “I’m glad about the move. Nothing against the (Olympia) rink, but the new place (Joe Louis Arena) looks great on the water. It’ll be good for the crowd and players. This is getting a little dingy down here.”

Indeed, the old red barn on Grand River Avenue had begun to show its age. The four-story, 14,200-seat arena was known for big crowds and an atmosphere tinged with the hue of cigar smoke. As for those crowds, well…let’s just say they could get rowdy at times.

“I’ve told people all over Canada,” said Wings’ coach Bobby Kramm, “you haven’t seen a hockey game until you’ve seen one at Olympia. If you’re not entertained on the ice, you’ll be entertained in the stands.”

Back in 1927, it had hosted its first NHL contest, a 2-1 loss by the Detroit Cougars at the hands of the Ottawa Senators (the Cougars later became the Falcons, who in turn became the Red Wings).

That was not the first event held there, however. It had actually opened its doors several days earlier with a money-losing rodeo.

There had been other big doings at the barn through the years.

Herbert Hoover had held rallies at the place. So had the Black Muslims.

Joe Louis had boxed his way to glory there, as did Tommy Hearns in recent years. A young Elvis rocked the house in 1957, and he’d returned 20 years later, older and flabbier, to put on a lethargic show shortly before his death.

The Beatles sent teeny boppers into shrieks when they opened their 1964 concert with “Twist and Shout.” The Rolling Stones followed in ’69, with Mick Jagger belting out “Midnight Rambler” while prancing on stage with a blood-red scarf. And the Chairman of the Board himself, Frank Sinatra, thrilled the audience with his version of “Bad, Bad Leroy Brown” in 1976.

Olympia, in fact, had seen a little bit of everything. There had been roller derby, lacrosse, and pro wrestling, including an unknown named Alex Karras, before he gained fame as a Detroit Lion.

Even the Detroit Pistons had played to sparse crowds for a couple of seasons.

But Olympia was mostly all about Red Wings hockey. Along with Boston Garden, Chicago Stadium, the Montreal Forum, and Maple Leaf Gardens, Olympia was one of the NHL’s legendary venues.

It epitomized old school. For years, it featured wire fence atop the boards (instead of glass), which made it easier for fans to hear the sounds of skates, sticks, pucks (and curses). The scoreboard clock actually had hands instead of digits. The lighting could best be described as murky. And many fans had to endure sitting behind posts.

Players, on the other hand, often said it had the best ice surface around. Red Kelly, a former Wing, likened it to “creamy ice cream, great ice. You could play the boards like a pool table. The rebounds came out true. The acoustics were loud. You could hear them from the balcony.”

It had seen plenty of championship hockey in the glory years. But as the Red Wings organization began to decline, so did the neighborhood surrounding its home. Suburbanites feared the trek down, and parking at night became an adventure. The hockey crowds got younger, and rowdier. They became known for holding up homemade banners, often with witty sayings, but sometimes with sarcastic criticisms aimed at visiting players (or even a few Red Wings). In the 1940’s and ’50’s, the swells had escorted their fragrantly perfumed ladies in fashionable fur. By the ‘70’s, scruffy blue jeans and the distinct odor of marijuana were the height of style at the old barn.

Tossing octopi onto the ice has become a playoff tradition in Detroit. But in the last days at Olympia, fans were also known to hurl various seafood, not to mention the occasional live hamster.

The place fell into disrepair. Some balcony railings became dangerously wobbly. The stairwells smelled of urine and oozed decades of grime. The roof leaked at times. Graffiti shouted its obscurities from the exterior walls.

Some traditions never died at Olympia, however. When the Wings scored, the organist blared an old ditty that began, “Oh the moon shines bright on pretty Red Wing, pretty Red Wing…”

A raucous crowd of 15,609 came to the swan song that cold December night. They brought their banners, their blow horns, their toilet paper, eggs, and fish. The cast it all on the ice throughout the game, causing delays while it had to be cleaned up. The game was anticlimactic, a 4-4 draw that brought the Wings’ record to nine wins, 12 losses, and seven ties.

After the final buzzer, the fans hung around and snapped pictures. They booed when the announcer mentioned the name of the brand-new Joe Louis Arena, where the Red Wings would be skating in just a few short days. The organist played “Auld Lang Syne,” and when everybody had said their goodbyes, they shuffled out for the last time, reminiscing about great games from long, long ago.

The era of Joe Louis Arena was about to begin.