Remaining schedule gives Lions a chance to run the table 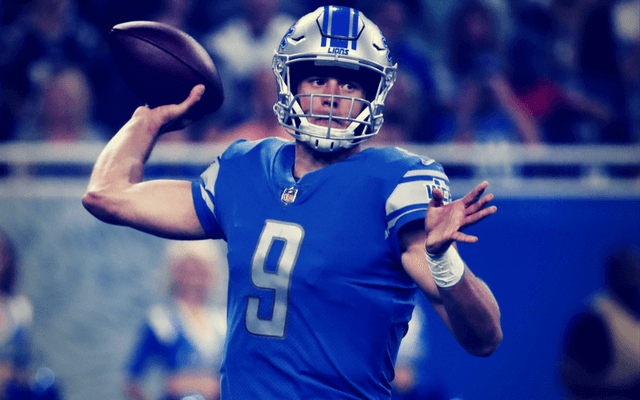 Matthew Stafford and the Detroit Lions have a favorable schedule in the last eight weeks of the 2017 NFL season.

The Detroit Lions took care of business when they defeated the depleted Green Bay Packers on Monday Night Football. The victory improved their record to 4-4 at the midpoint of the NFL season.

Normally, an “Even Steven” 4-4 mark would not be cause for excitement. But a glance at the remaining schedule shows that Detroit has favorable matchups in almost every game here on out. It’s not inconceivable that the Lions could run the table in the second half.

The Browns are 0-8 and they’ve not only been losing to every opponent, they’re losing to each other. The team is splitting apart over several off-the-field problems with players and coaches. The Browns have been terrible for years, and the future looks just as miserable for this dysfunctional franchise. The Lions will easily handle Cleveland at Ford Field this coming Sunday.

The Bears currently sit at 3-5, and they’ve been hard to figure out. They beat the Steelers, Panthers, and Ravens, but they’ve also looked lost on the offensive side of the ball and failed to score touchdowns in two of their defeats. Chicago elevated rookie QB Mitch Trubisky to the starter role a few weeks ago, but so far he’s played very much like a first-year signal caller. Look for the Lions defense to get to Trubisky and secure a road win against their division rivals.

In Week Four in Minnesota, the Lions manhandled the Vikings for a hard-fought 14-7 road win. The Vikings are built on an elite defense, but like every other team in the NFC North (now that Aaron Rodgers is sidelined), the offense is suspect. The Vikings front four put a lot of pressure on Matthew Stafford in their first game, but this time around the offensive line should be healthier and wiser. The Lions will win a thrilling game on Thanksgiving in front of their turkey-stuffed fans at Ford Field.

As usual, the Ravens have a very good defensive unit, having pitched two shutouts this season in big wins over the Bengals and Dolphins. Baltimore is stingy against the pass, but they are vulnerable to a ground attack, so it’ll be important for the Lions to mix it up on offense and establish a running game. This will be a tough test, one of the more difficult games of the second half, but I think the Lions’ defense will raise their game up in this challenge and help the team to a win on the road. The leg of Matt Prater may be the best weapon in a low-scoring game against the Ravens.

Week #14: At the Buccaneers

Tampa Bay will coming off three straight road games to host this tilt against the Lions. Through eight games, the Bucs are only 2-6, but they’ve dropped a few close games. Still, the defense is like a sieve, especially against the pass. That should allow Stafford to have a banner day. Look for plenty of passing TDs from the arm of #9 as the Lions win a shootout against the unconventional Jameis Winston.

By this time the Bears will be looking toward 2018 with a young QB still learning the ropes. With their eyes on catching the Vikings to win the division title, Detroit won’t lose to the Bears at home.

Cincinnati has one of the worst offenses in the league, so the feisty Detroit defense should have a good game here. The Bengals will have nothing to play for but pride, so the Lions will need to be careful not to look ahead to the final matchup against the Packers, but this should be a pretty easy win against a mediocre team.

Will Aaron Rodgers be back? Doubt it. The Packers are lost without their star QB, and by December they should be out of playoff contention, so it doesn’t make any sense to bring him back in 2017. Absent Rodgers, the Packers have little chance to put up points. Stafford will be trying to guide the Lions to a season sweep over Green Bay and a possible division title. Having beaten the Vikings twice, the Lions only need to match their win total to take their first division title since 1993.

How do you think the rest of the 2017 season will play out for the Lions? Let me know in the comments section down there…