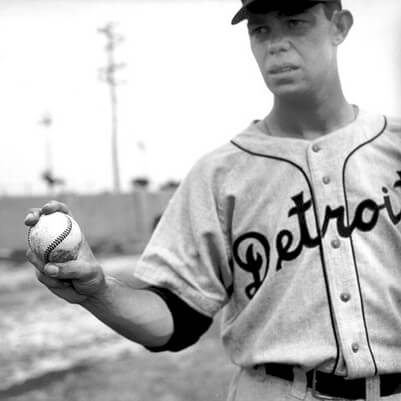 Art Houtteman displays his fastball grip during spring training in Lakeland with the Detroit Tigers in the early 1950s.

We all know the refrain. Detroit Tigers pitcher Art Houtteman, who experienced his share of misfortune and tragedy during his dozen years in the big leagues, certainly did.

Great things once were predicted for Houtteman, a 6-2, 188-pound right-hander whose father was a former Detroit sandlot pitcher. An amiable sort with solid fundamentals, Houtteman was regarded as one of the very few untouchables on the Tigers during his first few seasons at Briggs Stadium.

“The main thing in pitching is to keep ahead of the hitter,” he said in 1950, the year he won 19 games and made his only All-Star Game appearance. “You have to be lucky, too.

“You get rid of one hitter easy. He strikes out or pops up or hits an easy grounder to the infield. The next one hits a line drive that should be good for two or three bases but it is straight at an outfielder. Then somebody bloops one in there and gets a base hit. That shows you that while there is a lot of luck in pitching, it isn’t always good.”

Houtteman was only 17 and still attending Catholic Central High School in Detroit when Tigers scout Wish Egan signed him to a $20,000 contract in 1944. “Of all the pitchers I’ve ever see,” Egan said, “he comes nearer to perfection than any of them. He has everything—physique, temperament, brains, courage and everything that goes with the attainment of greatness. He hasn’t a flaw in his delivery.”

Although he was a member of the ’45 pennant winners that went on to beat the Chicago Cubs in the last World Series of the World War II era, the teenager was used sparingly that summer, pitching just 25 innings (all in relief) and dropping his only two decisions.

He spent the following year pitching for the Tigers’ top farm club in Buffalo, where he led the International League in strikeouts. That September he made his first big-league start, a complete-game loss. By July 1947, however, he was in the big leagues to stay. Just days after turning 20, he blanked Washington on five hits. This was followed by another five-hit gem, this time against Boston, and a shutout of the St. Louis Browns. He finished the season with a 7-2 record for the second-place Tigers.

With his menu of fastball, curve, and sinker, Houtteman was a challenge to even the greatest hitters. Joe DiMaggio named him as one of the toughest young pitchers he had to face. But once put into the Tigers’ starting rotation in 1948, Houtteman “couldn’t win for losing,” sportswriter Lyall Smith wrote. “He’d lose 1-0, 2-1, 3-2. He came up with a 4-hitter one night at Briggs Stadium. That night, dogged by tough luck, Bob Lemon of Cleveland threw a no-hitter.” Houtteman finished 2-16 in 1948, a record Harry Salsinger of the Detroit News attributed to “bad luck, not bad pitching.”

Even worse luck was to follow. The following spring in Lakeland, Houtteman was returning from a dance when the car he was driving was hit by a truck. Houtteman was severely injured, suffering a fractured skull and a large gash over his left eye. A priest was summoned to the hospital to administer last rites. “It’s in God’s hands,” the priest told Tigers general manager Billy Evans.

Houtteman surprised everyone by the speed of his recovery. He made his first start of the 1949 season in late May. After losing his first three starts, “Hard Luck” Houtteman regained his winning ways. He went 15-7 the rest of the way and earned the admiration of the baseball world. “The Comeback Kid” was named Most Courageous Athlete by the Philadelphia Sports Writers Association. At a banquet emceed by comedian Bob Hope, Houtteman  flashed some humor himself by saying, “All a fellow has to do to get on this dais is to get hit by a five-ton truck.”

Houtteman continued his comeback in 1950, helping pitch the Tigers to within three games of a pennant. It was a frustrating summer. Not only did the team miss out on a World Series after leading the pennant race most of the way, but Houtteman twice missed out on notching his 20th victory. He finished 19-12 with a 3.53 ERA, including a one-hitter against the Browns. After the season, Houtteman married a pretty New Jersey girl named Shelagh Marie Kelly.

The couple had just returned from their honeymoon when Houtteman learned that he’d been drafted. He wound up missing the entire 1951 season.

Simple hard luck turned into tragedy when Houtteman returned from army service to the Tigers in 1952. On April 2, 1952, his wife was driving back to Detroit from spring training when she was involved in a rollover accident on a mountain road in Tennessee. The Houttemans’ seven-month-old daughter, Sheryl, was killed.

Houtteman, distraught after his daughter’s funeral, lost his first two starts of the season. Then, on April 26 at Briggs Stadium, he carried a no-hitter into the ninth inning against Cleveland. He got the first two outs, then shook off catcher Joe Ginsberg’s signal for a curve. He fired a fastball to Harry Simpson, who slapped it to left for a single. Thus he became the latest in a line of Tiger hurlers to lose a no-hitter in the ninth inning. That was the way it went for the Tigers in 1952, who finished in last place for the first time in franchise history. Houtteman finished 8-20, a record nobody in Detroit thought was an accurate reflection of his talent.

Nonetheless, the following June he was part of an eight-player trade with Cleveland that brought infielder Ray Boone to Detroit. Houtteman, who had been admittedly “experimenting” his last couple seasons in Detroit, was straightened out by Indians pitching coach Mel Harder. Houtteman soon replaced the aging Bob Feller in the Cleveland rotation, posting a 15-7 record in 1954 as the Indians won a league-record 111 games. Houtteman made a single relief appearance in the World Series, which the New York Giants won in four straight games.

The following year, Houtteman surrendered his spot in the rotation to rookie phenom Herb Score. Two years later, in May 1957, Houtteman was sold to Baltimore. He went on to pitch a couple of more seasons in the minors, finishing up with Portland in the Pacific Coast League in 1959. His career ledger showed a record of 87-91 with a 4.14 ERA in the majors.

Houtteman became an executive for a local steel company after leaving baseball. Following the death of their first child, he and his wife had three more children. Houtteman died of a heart attack at his Rochester Hills home in 2003. Those who knew him said that, all things considered, he always thought himself a lucky man.