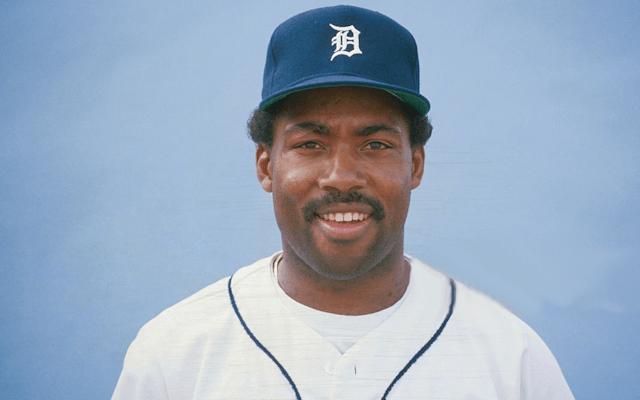 Chet Lemon was one of the most popular members of the Detroit Tigers in the 1980s.

I’ll always remember the time we talked to Chet Lemon during a Detroit Tigers game.

It was the end of a long ballpark experience, something my family will never forget, and something that could never happen today.

It started with excitement and jubilation. At 9 years old, I found out my dad had landed tickets to see Nolan Ryan pitch at Tiger Stadium. Not only that, Ryan was going for his 299th career win and we were taking my grandma for her birthday.

We got to the ballpark early, got our tickets ripped by the ticket takers (back when they still did that).

Then we went right to the Texas bullpen down the right field line to watch Ryan warm up. I was eager to see how high his knee really went during his windup, and yes it was incredibly impressive to this 9-year-old pitcher.

Now it was getting near game time, so we headed to the concession stand, so my parents loaded up with dinner for three growing boys and grandma. We sat down in the lower deck right behind first base and enjoy.

We watched Ryan pitch the first and the second innings. But in the middle of the third inning, something strange happened. Some people came up to us and told us we were in their seats. My parents got out their tickets and showed the other fans and vice versa. They all looked legit. We called an usher over and he looked closely at our tickets and realized the date on the ticket was actually for the night before, though the actual date was printed right near where the tickets used to say rain date, which understandably left everyone scratching their heads.

The usher joked it was a nice scheme to see Nolan Ryan pitch (as the tickets were scarce).

So my mom was beside herself worried about being in someone else’s seats with a ton of food. Will they kick us out for having the wrong tickets?

Thankfully no one was at the end of our row, so we scooted down and finished our food. Then some fans came up and said these were their seats.

Now I’ll be honest. Even as a 9-year-old, my first thought was: “Why are all of these people three innings late to watch Nolan Ryan?”

We finished up our food and the usher told us we could go down the right field line or out in the outfield and just sit wherever we could find a spot.

Well that finally brings me back to Chet Lemon.

The Tigers right fielder was one of our favorite players. I still have my Chet Lemon button that I got at Tiger Stadium (I’d like to say at that game, but I honestly don’t remember … it was around that time, though), and my brother still has his Chet Lemon mini bat.

So there we were: young kids, grandmother and looking more tired-by-the-second parents, sitting in the right field bleachers right behind Chet. By this time we’re praying that we’re not in anyone’s seats.

Despite all the crazy that went on, we were still super excited to be watching Nolan Ryan pitch.

But once Ryan was out of the game, we needed something (besides the chocolate malt with the wooden tongue depressor) to keep us going. So we decide to yell at Chet Lemon.

Not yell at him, I suppose, but yell to him.

We got him to look back to us and smile a few times, which I can still picture a quarter century later.

We called the experience the “Field of Bad Dreams” and framed the ticket and gave it to my grandma. It is still on her wall. I love looking at it and remembering the crazy day, but it reminds me of Chet Lemon’s smile, too. He helped make sure that night wouldn’t be forgotten.