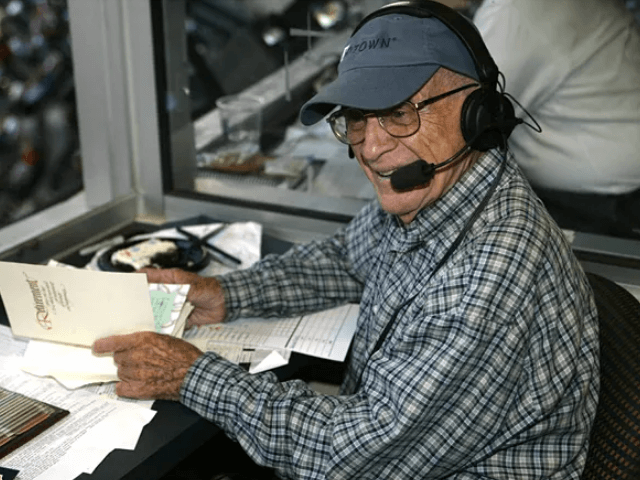 Ernie Harwell in the broadcast booth at Comerica Park in Detroit.

To millions of people, many in Michigan, Ernie Harwell was a friend.

Ernie’s voice was the curtain rising on spring. His baritone was the narration of the summer. His voice was like a warm blanket that sat on your feet in the fall. For many fans, Ernie was the sound of baseball.

We lost Ernie just over a decade ago, in May of 2010. He was 92 years old, and for more than half his life, Ernie was a broadcaster, first for the Atlanta Crackers in 1943, then for two New York teams, the Dodgers and Giants, then for the Orioles, Tigers, and briefly for the California Angels.

Ernie’s last game behind the microphone was in 2002, but his memory lived on after his last word went out over the air, and his acts of kindness still linger for many of us. Ernie Harwell was a tremendous broadcaster, being inducted into the “broadcasting wing” of the Hall of Fame in 1981. But as wonderful as he was in the booth, Ernie was a far greater gentleman.

I was lucky enough to meet Harwell a few times, and on two occasions I was able to speak with him at length. In 2002, Ernie’s book “Ernie Harwell: My 60 Years In Baseball,” came out, and after the baseball season, he visited Cooperstown with his wife Lulu to promote it. At the time I was working for the Baseball Hall of Fame as a webmaster of sorts. I worked under Jeff Idelson, who was at the time the Vice-President of Communications for the Hall of Fame. He surprised me by asking if I would like to have dinner with the Harwell’s.

I couldn’t say “YES” fast enough to Jeff, and one fall evening me and my wife drove to the Otesaga Hotel to join Ernie, Lulu, and Jeff for dinner. The Otesaga is an historic hotel with expansive porches that overlook Otsego Lake. It’s a perfect venue for old timey baseball dinners with old timey baseball legends.

It was a fantastic dinner, with great food and conversation. The topics of the evening were baseball mostly, though Lulu liked to also talk about her garden. Her contribution to the baseball chatter was her favorite anecdote: she was fond of saying that she only listened to the first inning of the broadcasts “to make sure Ernie was at the ballpark.” That joke got a hearty laugh at the table.

Ernie Harwell is a great dinner companion, and the conversation was fascinating. I remember asking Ernie about Mark Fidrych and the 1976 season, when Tiger fans were delighted by the rookie pitcher with curly hair who talked to the baseball. Ernie mentioned that “The Bird” was the least egotistical superstar he ever met. We also talked about an underappreciated aspect of Ernie’s career: his songwriting. Harwell wrote more than 60 songs, including a few covered by popular artists, but Ernie liked to be humble about it. “I have more no-hitters than Nolan Ryan,” he liked to say about his song catalog.

I know my wife and I posed for a photo with Ernie and Lulu after dinner, back at the Hall of Fame, where Harwell spoke for about an hour to a packed crowd during a museum event. But I don’t know where that photo is. The memory of the conversations at dinner are more important.

A few years later, I was in Detroit for an event, I believe it was the 2005 Major League Baseball All-Star Game, hosted at Comerica Park. By that time Ernie was retired and spending more time at home with Lulu (his “Bride” as he liked to call her). But the All-Star festivities brought Ernie out of his retirement cubby, and he was seen around the ballpark. I was covering some of the events for the Hall, and also working at the Hall of Fame’s “All-Star Gala” booth. Mostly, I was soaking in the baseball atmosphere. But I was working, and I pounced on the chance to chat with Ernie. We arranged an interview, for the purposes of a few articles I was writing for the Hall of Fame’s website.

This time, Ernie and I spent about 40 minutes one-on-one, tucked away in a suite somewhere in the ballpark. He was a small man, but sturdy and trim. He still had that famous baritone voice, and the most striking thing about talking to Ernie was how focused he was. When you spoke with him, you were the only thing he was concerned with. He wasn’t distracted, and he made you feel like whatever you were talking about was the most important conversation he ever had. He also had that manner about him, that habit of using your name when he answered questions like, “Well Dan, I remember when I…” and so on.

I don’t even remember the story I wrote about Ernie, it might be somewhere on the Hall of Fame’s website, if they keep such things. But I do remember talking to Harwell about his childhood in Georgia, and that when I did, I struck a chord with him. As a result, I learned more about Harwell than I ever imagined I would.

He explained how he was only five years old when he got a job as batboy for the Crackers in Atlanta, a minor league team. This was the 1920s, and he talked about reading the box scores to see how Ty Cobb was doing, and how he ached to meet Babe Ruth. As fate would have it, when little Ernie attended a barnstorming game that featured Ruth’s Yankees (in the late 1920s), he squirmed his way through a pack of adoring fans and found himself face-to-navel with The Great Bambino.

“All the kids had baseballs or caps for Babe to sign,” Ernie recalled, “but I didn’t have anything, so I took off my shoe. The Babe scribbled his name on it and handed it back.”

Later, Ernie wrote a memoir titled “The Babe Signed My Shoe,” which was a series of short stories about the things he had seen as a baseball fan and broadcaster.

In that interview with Ernie I saw him transform from a 80-something year old man who was as popular as any person in the State of Michigan, to that little stuttering boy in Georgia who loved baseball. I pressed to get more details, and then Ernie shared something with me that I never heard him say before.

“My favorite ballplayer was a fella no one remembers,” Ernie said. “His name was Roger Cramer, but everyone called him ‘Doc’. ”

I had heard of Doc Cramer. But I’m a freak, a baseball history nerd. Most people probably never have. He played his first game in 1929, when Ernie was about 10 years old. Somewhere along the line, Ernie met Cramer at the ballpark in Atlanta, probably when the Athletics were traveling through town on their way north from spring training. Young Ernie met Doc, and the two became pen pals. This was back when people had pen pals. Ernie told me he probably write 200 letters to Cramer over the years. The friendship lasted for years.

Cramer matured into a good player, a fast outfielder, a singles hitter who usually hit .300 for the Philadelphia A’s, Boston Red Sox, and Tigers, the three teams he played most of his career for. He was an All-Star five times, and he had more than 2,700 career hits. He was an exceptional bunter, and like many players of his day, Doc wore his ballcap far back on his head, so you could see his forehead. Doc was a letter writer too, and he tried his best to keep up with Ernie’s correspondence. By the time Cramer played his final big league game, in 1948 for Detroit, Ernie was calling games for the Brooklyn Dodgers.

“Doc was a good all-around player,” Ernie told me. “He didn’t hit big home runs and he was never a batting champion, but he did everything pretty well, and he was the kind of teammate you wanted on your club. We talked about a lot of things when we would see each other, and in our letters. Not just baseball, but life.”

Cramer died in 1990, but when I spoke with Ernie that day in Detroit in 2005, his eyes lit up when he talked about his all-time favorite player. “I don’t know why people don’t remember Doc Cramer,” he said.

I filed my story, and ended up writing a piece on Doc Cramer too, based on Ernie’s memories. A few days later, I got a letter addressed to me at the Hall of Fame. It was from Ernie.

“Thank you for interviewing me for your story,” Ernie wrote. “I enjoyed speaking with you, and I wish you well. All my best, Ernie Harwell.”

Who writes a letter thanking a writer for interviewing them? Who writes letters at all, even in 2005? That was Ernie Harwell, the Gentleman from Georgia. Somewhere Doc Cramer must have been happy that the tradition was being passed on.

3 replies on “Remembering Ernie Harwell, the Gentleman from Georgia“