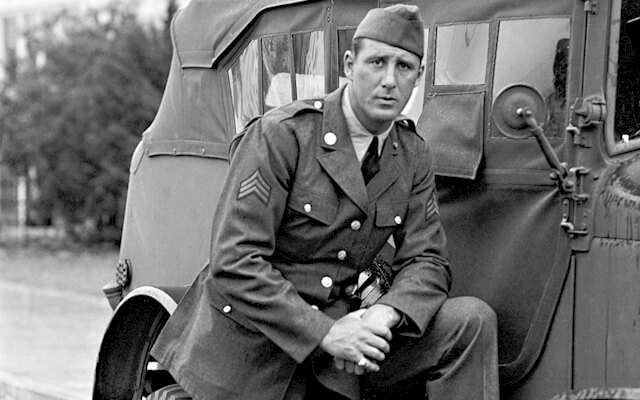 Detroit Tigers first baseman Hank Greenberg enlisted in the U.S. Army in 1940 as war loomed and re-enlisted after Pearl Harbor. He missed 4 1/2 years of his playing career while serving in the military.

Today is the 105th anniversary of the birth of Henry Benjamin Greenberg, known as Hank, the original “Hammerin’ Hank”, a star slugger for the Detroit Tigers in the 1930s and 1940s who eventually earned election to the Baseball Hall of Fame.

Now that more than a century has passed since he was born, and seven decades have whizzed by since he last swung a bat for the Tigers, there are few people left who remember Greenberg and fewer still who ever saw him play. But he deserves to be remembered for many reasons, not all of them relating to the national pastime.

When I was ten years old I received a book for my birthday. It was a big book — a hefty tome about five inches thick — called the MacMillan Baseball Encyclopedia. It was a volume filled with numbers and names, no photos, no text, just a big, fat encyclopedia of baseball stats. I was in heaven. I don’t know how many hours I spent sifting through that book, but it was enough to make my parents worry about my ability to make friends. But I found a lot of interesting things in that birthday present.

That book was famous, so famous that it had a name — “Big Mac”. It was first published in 1969, and then updated every three years for a few decades after that. It was the first book that offered the complete statistical record of baseball, or any sport for that matter. It was revolutionary because it inspired many baseball fans to explore the history of the game and the numbers as well.

My ten-year old self poured through Big Mac for hours and hours, being introduced to ballplayers I’d never heard. Being a Tigers fan I naturally gravitated to the Detroit ballplayers and that’s when I first examined the career ledger of Hank Greenberg. I saw that he hit 58 home runs one season. Holy cow, that was almost as many as Babe Ruth hit. I saw that Hank drove in 184 runs one year. Wow, 184 runs batted in?!? How did he do that? If a player had 90 RBIs in the mid-1970s they were a star. I saw that for Detroit in 1940, Greenberg hit 50 doubles and 40 home runs while driving in 150 as he was named the league’s Most Valuable Player. Pretty impressive. Then I scanned down and saw that he only appeared in 19 games in 1941 and then he didn’t play at all for the next three years. Big Mac had no entry for Greenberg in 1942, 1943, or 1944. Why not?

Of course at ten years old I knew some things about World War II, but I knew a lot more about baseball. I never thought to pair the two things together, but then after a trip to the library I found another book titled “Even The Browns”, which was about baseball during World War II. That book explained how major league baseball was sucked dry of many of its stars during the Second World War. Greenberg was one of them, in fact he was the first ballplayer to enter the military. He was a real hero.

In the fall of 1940 the United States instituted its first peacetime draft. Europe was embroiled in war again, and though President Franklin Roosevelt was saying all the “let’s stay neutral” type things in public, he knew America would end up in the fight eventually. The 29-year old Greenberg figured the U.S. would join in with the allies soon and he wanted to do his part. On October 16, 1940, just eight days after he and the Tigers lost Game Seven of the World Series to the Cincinnati Reds, Hank registered for the draft, the first professional baseball player to do so. The following spring he was classified 4F due to flat feet by the Detroit draft board, but he insisted on being re-examined. In April the draft board reclassified Greenberg and a month later he was inducted into the Army. The U.S. had yet to enter the war, but Hank was committed to doing his part. Asked about having his salary shrink from $55,000 a year to $21 a week, he replied “”I made up my mind to go when I was called. My country comes first.”

Hank trained as a tank gunner that spring and summer and he only appeared in 19 games for Detroit. Still, there was no telling when the U.S. might actively enter the war, and since he was 30 years old (Congress decreed that any man over 28 would not be drafted), he was discharged on December 5. Two days later the Japanese hastened the U.S. entry into the war when they attacked Pearl Harbor. Seven weeks later Greenberg re-enlisted in the Army, accepting a position as a sergeant in the Army Air Force, and a few weeks later he finished officer training school and was commissioned a first lieutenant. He stayed in the uniform of the United States military for the next three and a half years. His last position was in the China/India/Burma Theater of Operations where he scouted bombing targets for B-29s. In all, Greenberg served 47 months in the service during World War II, the longest tenure of any ballplayer.

As a result, Greenberg missed nearly four full seasons of his big league career. It’s not like he was an old man either, he was still very much in his prime. He was the league MVP in the year before he entered the service, and in 1946, his first full year back, Greenberg paced the league with 44 homers and he also led in runs batted in too.

No one would have blamed the big guy if he’s been rusty when he returned to the Tigers in July of 1945, just a few weeks before the Japanese finally surrendered in the Pacific. But amazingly, Hank was sharp. In his first game back, on July 1 at Briggs Stadium against the A’s, he smacked a home run. Detroit fans were so excited that they littered the field with hats. Three days later, in the first game of the traditional July 4th doubleheader in Detroit, Greenberg launched a mammoth homer off Dave Ferriss of the Red Sox. He was already the most dangerous hitter in the Tigers lineup, and very well for the team, seeing as they were in a fight for the pennant with the Yankees and Senators.

On September 30, 1945, still only twelve weeks removed from being a soldier, Greenberg hit the most important home run of his career, a grand slam against the Browns in the ninth inning on the final day of the season. The blast turned a 3-2 deficit into a 6-3 lead, and the Tigers won the game to clinch the pennant. Hank was back and so were the Tigers. Four days he later he hit a home run to assist Virgil Trucks in a win in Game One of the World Series. Five days after that, he and his teammates celebrated as they won Game Seven over the Cubs to capture the title. You couldn’t make this stuff up.

What might Greenberg had accomplished if World War II hadn’t interrupted his career?

Taking his last two full seasons before the war and his first full season after, we can average his output to arrive at a reasonable expectation for his missed time. That comes to a per season average of 39 homers and 130 RBIs for Big Hank. Multiply that by four-and-a-half seasons and that would give Greenberg an additional 175 homers and 585 runs batted in. Tack that sort of production on to his already impressive career totals and we see what Hank might have produced:

The adjusted home run total would have ranked third in baseball history at that time, behind only Ruth and Jimmie Foxx. His career RBI total would have been fourth, trailing only Ruth, Foxx, and Mel Ott. It’s safe to say that Hammerin’ Hank’s batting average would have stayed up around the .320-.325 mark, a figure it was hovering around prior to his lost years in the war. As it was, he settled in at .313 when he retired following the 1947 campaign.

Playing the “what if” game can be interesting. How different would Greenberg be viewed by baseball history if he’d been a 500-homer guy? Who knows if he could have eclipsed Ruth’s 60-homer record in one of those four full seasons he missed? Maybe he could have driven in 190 runs, or 200?

But it’s not baseball history that matters, it’s history in general. Greenberg did his part, and it’s important that we remember that all these years later, even if only for one day.

Happy birthday, Hank, and thanks.

4.7
5
2 months ago
Recently got a blank jersey stitched at Vintage Detroit and the finished product looks awesome! I don't live nearby so the ability to have it shipped for $10 was well worth the cost. Paul was great to work with and offered to delay shipping when I told him I would be on vacation on the original delivery date. Thank you so much, I can't wait to wear my jersey to a Wings game!
5
2 months ago
Stopped by Wed morning 7/6 and had the pleasure of dealing directly with Lynne. She is very accommodating and made me feel at home, especially since I was unaware they don't operate a standard retail shop. Lynne asked what I was interested in and presented me with a great selection of Tigers caps and T-shirts. A short while later I left with a new cap and a custom Fidrych T-shirt. Extremely satisfied with the wonderful personable service!
5
5 months ago
Ordered a custom Manning jersey two days ago and it already arrived. I’m so happy with it, thank you!
5
a month ago
I placed an order and received a follow up call within 24 hrs due to item was not available. Lynn worked with me to swap out to something similar excellent customer service. Excited to work with Vintage Detroit on future orders.
5
3 weeks ago
Definitely feeling fresh in my new head gear from VDC. Thanks for hooking me up. I appreciate the fast and speedy service. I'm reppin' the Eastside of Duh-troit in my new home, Atlanta, Ga..