The greatest scout in the history of baseball was a man named Joe Engel, the same man who found Leon Goslin when he was 19 years old in Columbia, South Carolina. At that time, Goslin was a pitcher but he played the outfield between his starts. On the day Engel was in the stands, Goslin misjudged a fly ball, the baseball hitting him on the head. But at the plate, Goslin hit three home runs and drove in eight runs. Engel sent a telegram that evening to Clark Griffith, owner of the Washington Senators, asking for permission to sign the teenager. Griffith gave the approval, and less than two years later Goslin was in the outfield for the Senators. 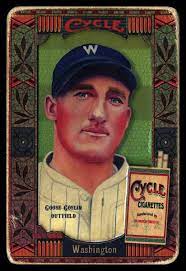 Engel later signed Joe Cronin, Bucky Harris, Buddy Myer, Cecil Travis, Ossie Bluege, and Alvin Crowder, all of whom starred for Griffith’s club in the 1920s and 1930s when the Nats won three pennants. But his best find was the man with the big nose, the lumbering, hard-hitting outfielder known as “Goose”, who also delivered the hit to drive in the winning run that crowned the Detroit Tigers world champions for the first time.

“Heck, let’s face it, I was just a big ol’ country boy having the time of his life,” Goslin once said. “It was all a lark to me, just a joy ride. Never feared a thing, never got nervous, just a big country kid from South Jersey, too dumb to know better. In those days I’d go out and fight a bull without a sword and never know the difference. It was just a game, that’s all it was.”

Leon Goslin was a big country kid from Jersey, but he graduated to the major leagues rather quickly after becoming a professional baseball, and his career was filled with highlights and some controversy.

In his years in D.C., where he spent twelve years in two stints as a member of the Senators, Goslin had a love/hate relationship with the fans. He frequently held out for money, and in those days fans fell on the ownership side in such confrontations. Goose could be streaky and when he fell into a slump, his supporters had a tough time out-screaming his detractors when he came to the plate. Goslin never cared much if the fans loved him, he was a proud, simple man who loved the game and never backed down from a challenge.

Goslin earned the nickname “Goose” because of the odd way he played the outfield, not his big nose. Early in his minor league career (Goslin started playing professionally when he was 16), teammates noticed that Goslin flapped his arms when he chased a fly ball. Mike Donlin, a talented outfielder in the first decade of the 20th century, was called “Turkey” for the same reason.

Before the 1935 World Series, the National League champions, the Cubs, held a meeting to go over the Detroit lineup. The coaching staff came to the conclusion that Goslin was the man they wouldn’t want to pitch to in a tight spot. Chicago pitchers walked Goslin five times in the first six games and he didn’t hurt them much. In Game Six, Chicago pitcher Larry French threw the scouting report out the window. In the ninth inning with the game tied, Mickey Cochrane singled with one out and moved to second base on a ground out. Goslin came to the plate, French was still on the hill for the Cubs. The batter on-deck was Pete Fox, a good hitter, but no Goslin. Normally, Hank Greenberg would be due up, but he was injured. French chose to pitch to Goose with first base open, a strategy that would never play out in modern baseball. Goose lined a fastball over the second baseman’s head into right field and Cochrane scampered home to give the Tigers their first World Series title.

Goslin might have had luck on his side in 1935. During the World Series, Goose kept a rabbit in the clubhouse at Navin Field. “If a rabbit’s foot is good luck,” Goslin said, “a whole rabbit must be even better.”

There have been three players who were the last batter in two World Series, Goslin among them. In 1925, Goose struck out to make the final out for the Senators in Game Seven. A decade later with the Tigers, Goslin had that game-winning hit. The other two players to be the last batter in a World Series twice are Edgar Renteria (1997 and 2004) and Boss Schmidt (1907 and 1908).