Lansing native and Atlanta Braves pitcher John Smoltz will be inducted into the National Baseball Hall of Fame this weekend. The usual horde of fans will be on hand, as will be any number of baseball’s greats who have been similarly honored. The media, mainstream and otherwise, will be heavily represented, as will all of organized baseball.

Unfortunately, even with all this pomp and ceremony, the one man who, more than anybody else, should be in Cooperstown to see it happen will not be on hand.

There’s no question that he’d be in New York if he could, but there’s a slight problem: he died ten years ago. His name? His name also was John Smoltz.  But he was known far better throughout Tiger Stadium – by everybody from the vendors and ushers to front office executives, to fans in the stands and players on the field – just as “Father John.” 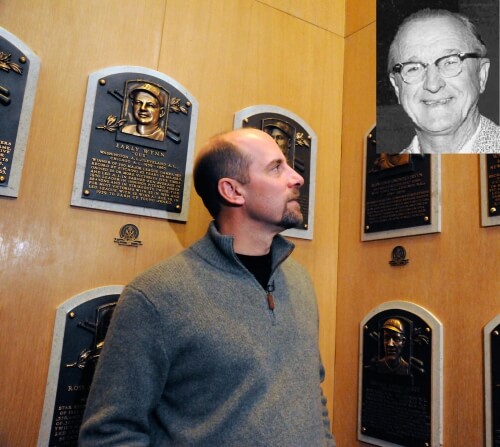 John Smoltz visits the plaque gallery at the National Baseball Hall of Fame in Cooperstown, New York where he will be inducted on July 26, 2015. The photo at upper right is of his grandfather, “Father John” Smoltz who was his biggest fan and who worked at Tiger Stadium for more than 30 years.

Father John was on the Detroit Tigers’ grounds crew for thirty years or more, but saying so doesn’t begin to describe his role at the old ball park. As a grounds crew member, he had dozens of assignments. He worked the scoreboard for a few years. He stood guard in the press box and outside the “Tiger Room” (the lunch room / lounge presided over by Pancho, the cook that Jim Campbell brought home from the Navy). Father John mopped up his share of kids’ puke in the stands.

When it rained, he carried dirt out to the batter’s box to soak up any standing puddles. He helped groom the infield, working as part of a team that had the precision and grace of the Rockettes. He’d volunteer for anything. No, make that “if somebody needed something done, Father John would find a way to be there.” He talked to everybody – to a degree that was noticeable even in a stadium where the club executives routinely knew the stilemen and ushers and even the occasional “daily” by name, and where a Tiger CEO once roundly scolded a press elevator operator for standing outside the park in the dark on a chilly night, waiting for her family to pick her up. “Next time call ME, Sarah. I’ll drive you home,” Bo Schembechler said.

Even in what amounted to an overall family atmosphere, no one person had his finger on the pulse of the whole ball park the way that Father John did. He talked to everybody, and, whether he was talking to a Tiger clubhouse boy or a visiting manager, he’d eventually say something that would make whoever he was talking to stop dead. “How’d you KNOW that??”

Father John knew everything that was going on in the stadium – in the press room, in the front office, the stadium office, in first aid – even the umpires’ room. Nothing got by him…and nobody minded that it hadn’t. He knew the players. He knew the coaches. He knew the fans and the fan-club presidents. He knew season ticket holders and freeloaders, and he was a friend to every one of them.

And he did his job – did it well. Being on the grounds crew was not (and is not) a responsibility for the faint of heart. Father John’s official assignment began at seven in the morning, helping to be sure the field and the stands were ready for the day’s game. Seats had to be cleaned and washed, the grass mowed, and the infield raked. Foul lines had to be chalked. Burnt out bulbs in the auxiliary scoreboard were spotted and replaced. There was nobody more a perfectionist than Ralph Snyder, Stadium Operations Manager. In Tiger Stadium, there wasn’t a blade of grass allowed to be out of line.

Different members of the grounds crew had specialties, but Father John went wherever he was needed, wherever he was sent. Over the years, he was so supportive of his fellow grounds crew members that they turned to him for advice on and off the field. He was good at that job, too – so good that the other guys told him he should be a priest, and they started calling him “Father John.” He loved it.

In the middle of the day the batting nets and the screens had to come out and be set up and the big batting cage brought in from the old bullpen. The grounds crew split, half of it working the lower deck, the other the upper and the field. On the days when crowds were expected to be small, Father John was more apt to be given extra assignments and circulate around the park. Wherever he went, he made friends, and he talked – and talked – and listened to those friends.

Father John talked with everybody and he listened to everybody, and when it came his turn to speak, the thing he liked most to talk about was his grandson. His pride in the young man was profound. Front office and “regulars” in the box seats alike, all heard frequently how well the other John Smoltz was doing – what a great little ballplayer he was – what a star he was with his high school team in Lansing – what a joy it was on the occasions that Father John could get away to see him play. When, in 1986, the Tigers signed young John Smoltz in the Amateur Draft, Father John’s joy knew no bounds.

It began to be obvious that this wasn’t just a matter of (grand)parental pride, either. Signed into A ball in 1986, the following year young John moved to double-A, and, in the same season, up to triple-A. He was a promising triple-A pitcher when, with the parent club in the middle of a pennant race, he was traded to the Atlanta Braves for Doyle Alexander. At the time it looked like a good move, win-win all around. Atlanta would have a good pitcher in the future, and the Tigers had one right then, when they needed him. Doyle Alexander did, in fact, help the Tigers to a divisional championship. While today’s fan knows too well what the Tigers had traded away, Father John already knew it in 1987. He was devastated.

In 1987, Bill Haase (retired Senior Vice-President of the National Baseball Hall of Fame) was the Detroit Tigers’ Executive Vice President and Chief Operating Officer. That is to say, he was Father John’s boss’s boss.

Today, Haase remembers that, over the years, he and Father John had a pretty good relationship. They talked often – of course frequently about the coming day when young John would wear the Olde English D and pitch for the Tigers.

Haase tells the story this way: “The day we traded [young John] to the Braves was extremely tough on him – broke his heart. Father John came to my office and asked if he could come in and talk. I said, ‘Of course.’   Well, he came in, shut the door, sat down and just cried. One tough day at The Corner.”

It’s a story that says a lot about Father John, and maybe even more about the changes in the ways that ball clubs are run today.

In any case, twenty-eight years have passed, and on July 26, 2015, Father John can consider himself absolutely vindicated. Baseball has made up for that “tough day.” And, up on the Field of Dreams, there’s a member of the grounds crew who’s wearing a grin that’s as wide as the head of his broom.