Three-time All-Star Zombo was a solid defender for Wings 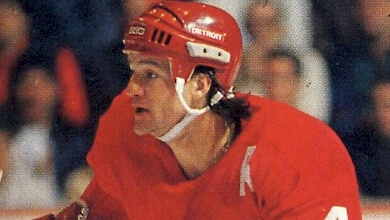 Rick Zombo was a tough defenseman for the Detroit Red Wings from 1984 to 1992.

How often have we heard the description “solid if unspectacular” applied to an athlete, no matter what the sport? In his 13 seasons with the Detroit Red Wings, St. Louis Blues, and Boston Bruins, defenseman Rick Zombo fit that description to a T.

In fact, if we were to start a Hall of the Solid and Unspectacular, Zombo would be a first-ballot inductee.

Born May 8, 1963, in Des Plains, Illinois, Zombo was a product of the United States Hockey League. Skating for the Austin Mavericks as a 17-year-old during the 1980-81 season, he got into 43 games and earned 36 points. It was good enough to attract the attention of the Red Wings, who drafted him in the 8th round (149th overall) of the 1981 NHL entry draft.

It was a historic moment, both for the Red Wings and the National Hockey League. That’s because Zombo was the first player ever to be drafted straight from the USHL to the NHL.

Rather than sign with Detroit, however, Zombo chose to head off college. The University of North Dakota’s Fighting Sioux had a strong hockey team at the time. In fact, in Zombo’s freshman year, they won the 1982 NCAA National Championship. Taking on the Wisconsin Badgers in the championship game, the Fighting Sioux prevailed by a score of 5-2. Zombo was solid, if unspectacular (there’s that phrase again) in the regular season, skating up in 45 games and earning 16 points as a defenseman. While not on the ice, Zombo burned the midnight oil as a Business Administration major.

Zombo had the honor of earning a spot on the U.S. National Team in the 1983 World Junior Hockey Championships. He really came into his own in the 1983-84 season at UND, registering 31 points in 34 games. But he eventually left college to join the Adirondack Red Wings of the American Hockey League. He played in 56 games, with three goals and 35 points, and even saw action in one game for Detroit in the ’84-’85 campaign.

After that, it was back to Adirondack for most of the 1985-86 season, but Zombo was promoted again to Detroit near the end, got into 14 games, and recorded his first assist in the NHL.

Zombo played his first 25 games at Adirondack in the 1986-87 season before finally returning to Detroit for good. In 44 games with the Wings, he earned five points, and followed that up in the post-season with an assist in seven games. That was the first year for new head coach Jacques Demers, whose Wings went to the Conference Finals only to lose in five games to the powerful Edmonton Oilers and Wayne Gretzky.

Demers, in fact, was the coach that Zombo considered the best he ever played for. “He had a history of taking players and putting them in the right position to do well.”

Zombo was 6’ 1” and 185 pounds, with a low center of gravity that gave him good balance on the ice, especially for playing the blue line. His powerful stride and good agility helped him survive as a defenseman in the rough-and-tumble NHL of the era.

1987-88 was Zombo’s first full season with Detroit. He posted a +24 rating on the strength of 17 points in 62 games. His best year in the Motor City was in 1989-90, when he established career highs in goals (5) and points (25) in 77 games. The Wings finished last that season. That was the last year before Detroit began its incredible streak of making the playoffs in consecutive years (24 as of this writing). Zombo was named to the National Hockey League’s All-Star Team three times, all with Detroit.

Traded to the St. Louis Blues three games into the 1991-92 season, Zombo went on to play four years in the Mound City, and one in Boston. In December of 1996, Zombo signed with the Los Angeles Kings, and was assigned to the Phoenix Roadrunners of the International Hockey League. He played a full season in the desert, and then retired.

After his playing days were over, Zombo worked as a scout, a coach, and a USHL manager. He settled in St. Louis, where he opened a hockey school (he also had one in Phoenix). Zombo is a man of many talents. Harboring an artistic bent, he developed a hockey-based coloring book for children (although we’ve heard that adults can enjoy it as well). And for all you comic-book aficionados out there, you’ll be pleased to know that Zombo collaborated on the City of Heroes series.

Not a bad résumé for a guy who was only solid, if unspectacular, as a hockey player.

Hockey fans can travel down to Toledo to watch Rick’s son, Dominic, who currently plays forward for the Walleyes of the East Coast Hockey League.