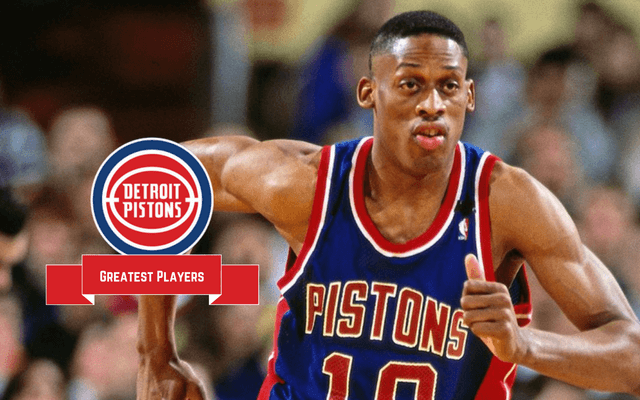 Long before all the craziness off the court, such as the dyed hair, the wedding dress he wore to promote an autobiography and the numerous sexcapades, Pistons legend Dennis Rodman was simply known for playing “bad” as part of “The Bad Boys” that won back-to-back titles in 1989 and 1990.

The skinny, big-eared Rodman was a virtual unknown when he was drafted by the Pistons in the second round of the 1986 NBA Draft out of Southeastern Oklahoma State.

And no, that is not a mistype. I did not mean to say Oklahoma State. I meant to say Southeastern Oklahoma State, a school with an undergraduate enrollment of a little over 3,000 students, according to U.S. News & World Report.

When he joined the Pistons as an older-than-usual 25-year old rookie, he was the furthest thing from eccentric or braggadocious. In fact, he was an introvert who “abhorred drinking and clammed up around strangers,” according to the Miami New Times.

That was a different Rodman, then. It was a Rodman who hadn’t accomplished anything as a professional basketball player yet. That was about to change quickly.

During his second season in the NBA, he played in a full season’s worth of games (82) for the first time, and even started in 32 of them.

Quite surprisingly, his second season in the Association also marked the campaign in which he recorded a single-season career-high in points per game (11.6). He never averaged more than 9.8 points a game the rest of his career.

Why was that the case?

Besides being subpar offensively, he also became the consummate team player. He knew that it wasn’t worth it for him to take shots away from teammates Joe Dumars, Vinnie Johnson and Isiah Thomas with the Pistons or from Michael Jordan and Scottie Pippen later in his career with the Chicago Bulls.

Something else also clicked for Rodman. He found out that he was really good at rebounding, and could make up for his lack of offensive prowess with his dominant rebounding ability.

And boy, did he go to work on those boards.

Coincidentally or not, during the Pistons’ first title campaign (1988-89), he averaged more than nine boards a game (9.4) for the first of 12 consecutive seasons.

During the ’88-89 campaign, he also posted the best single-season field goal percentage of his career (59.5 percent).

He followed up his productive third NBA season with an equally productive fourth one, in which he captured his first of two straight Defensive Player of the Year awards.

The “Worm,” a moniker he came to be known by, truly became unleashed. It meant that Basketball Hall of Famer Chuck Daly, Detroit’s head man at the time, could deploy Rodman to guard anyone on the court, including his future Chicago teammate, MJ.

Rodman became a vital component of a defensive scheme that was developed by Daly to lock down Jordan. The scheme was famously known as the “Jordan Rules.”

Whenever MJ drove into the interior of Detroit’s defense, it was the job of Rodman and his frontcourt counterpart Bill Laimbeer, another Pistons franchise icon, to rough up Jordan and prevent him from easily finishing at the rim.

Rodman, a 6-foot-7-inch small forward and power forward, also possessed an incredible amount of nimbleness. It provided him with the ability to guard and stay in front of Jordan and his sidekick Pippen on the perimeter.

Rodman’s lankiness made it tough for “His Airness” and Pippen to shoot over the top of him.

The Pistons and general manager Jack McCloskey had found a diamond in the rough in Rodman, and the relationship that the organization and Rodman had was mutually beneficial for the majority of Rodman’s seven seasons in Motown.

However, it started to deteriorate as soon as Daly, a father figure to Rodman, stepped down at the conclusion of the 1991-92 campaign.

Daly was able to keep Rodman’s emotions in check. As soon as he resigned, Rodman became uncontrollable, and wanted out of Motown.

It triggered the Pistons’ decision to deal the increasingly volatile player to the San Antonio Spurs in October of 1993.

To further exemplify that he mastered the art of rebounding, let me provide you with this nugget: He played his final NBA season at the age of 38 with the Dallas Mavericks. Albeit in a stint that lasted only 12 games due to Rodman wearing out his welcome, he averaged 14.3 boards. Few players in the history of the league were as skilled at gathering in missed shots.

No matter what inner demons he battled – such as thoughts of suicide in Detroit – or distractions he had off the floor (including Madonna, Carmen Electra and trips to Las Vegas) his relentlessness when it came to rebounding never wavered.

It’s what helped make Rodman a two-time All-Star, a five-time NBA champion (twice with the Pistons and three times with the Bulls), a Naismith Basketball Hall of Famer and one of the greatest players to ever put on a Pistons uni.