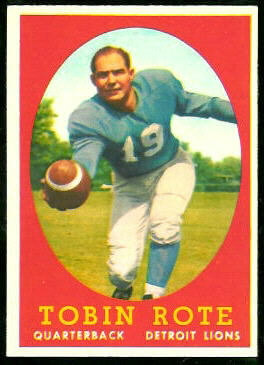 Tobin Rote needs no introduction to knowledgeable Detroit fans, who know him as the man who quarterbacked the Lions to their last NFL title in 1957. But he was more than that. He was a winner at every level he competed at.

A tall and rangy Texan, Rote had quarterbacked Rice University to a pair of Southwest Conference titles and a Cotton Bowl win his senior year when he was selected by Green Bay in the 1950 NFL draft. During his seven seasons with the sad-sack Packers, Rote never received the press he deserved though he was a standout either passing or running the ball. In 1956, for example, he accounted for 29 of Green Bay’s 34 touchdowns. He tossed 18 TD passes, seven more than anyone else in the league, and ran for 11 more, a record for quarterbacks that would last decades. It remains one of the most remarkable individual seasons in pro football history. However, Green Bay, desperate for linemen, traded Rote to Detroit at the end of the season for tackles Ollie Spencer and Norm Masters and guard Jim Salsbury, as well as halfback Don McIlhenny.

Coach Buddy Parker swung the deal because of what had happened in the final game of the 1956 regular season, a contest with the Bears at Wrigley Field that determined the Western Division title. The Bears won handily after Bobby Layne was knocked out of the game early on a cheap hit by end Ed Meadows. Parker viewed the 29-year-old Rote as more than a mere insurance policy in case Layne got hurt again in 1957. He announced early in training camp that he would alternate quarterbacks, going with whoever had the hot hand.

Ironically, Parker never go the chance to coach his newly acquired quarterback in a game. The mercurial coach abruptly quit just days before the exhibition season started and was replaced by longtime assistant George Wilson.

Events proved the wisdom of Parker’s acquisition of a capable back-up. Layne snapped his ankle in the second-to-last regular-season game, against Cleveland at Briggs Stadium. Rote took over and secured the win. The next week, in a must-win game at Chicago on the final week of the regular season, Rote rallied the team from a 10-point deficit at halftime and pulled out a 21-13 victory. The win over Chicago put the 8-4 Lions in a tie with San Francisco at the top of the Western Division standings.

The two teams met at Kezar Stadium one week later to determine the division title, and the 49ers all but chased the Lions off the field in the 30 minutes. At halftime, the Lions seethed inside the locker room as their opponents prematurely celebrated on the other side of the wall.

“We could hear them laughing,” Rote said. “The walls were paper thin. They were going on about how they were going to spend their championship game money. It made us angry.” Angry enough to come storming back from a 27-7 deficit early in the third quarter to win, 31-27, thanks to a fired-up defense and Tom “The Bomb” Tracy’s two touchdown runs. At the time, it was the greatest comeback in postseason history.

The win over the 49ers put the Lions in the championship game against Cleveland the following Sunday at Briggs Stadium. It was the fourth and final time the two bitter rivals met for the title during the 1950s.

Detroit broke out to a 17-0 lead, but rookie fullback Jimmy Brown’s 29-yard touchdown scamper narrowed the Lions’ advantage as the second quarter began. At this point it was still very much a ballgame. On the Lions’ first possession after Brown’s score, Rote’s passes took them into Cleveland territory. The drive stalled at the Cleveland 26. On fourth down with 11 yards to go, George Wilson motioned with a kick of his leg that he wanted Jim Martin to attempt a field goal.

As Martin trotted onto the field, Rote, the holder, decided to disobey orders. “We’d been working on a fake field goal all week in practice,” tackle Ken Russell recalled. “So in the huddle, Rote says, ‘Damn it, this is our money and we can play with it if we want.’ So he called for the fake.”

It was a gutsy call. If it didn’t work, Cleveland would regain possession and momentum and still be down only 10 points. But the play did work. As the kneeling Rote took the long snap from center, end Steve Junker pretended to block down on the linebacker before running an out pattern past Ken Konz. Rote sprang up, whirled to his right, and zipped the ball just past the outstretched fingers of Konz into Junker’s waiting hands. “God, don’t drop it,” Junker said to himself as he hauled in the pass and legged it into the end zone.

The Rote-to-Junker hook-up increased Detroit’s lead to 24-7 and put Briggs Stadium in an uproar. The din grew even louder when Terry Barr intercepted a Tommy O’Connell pass on the Browns’ next possession and returned it 19 yards for a touchdown. Just like that, the game had turned into a 31-7 rout, and there still was more than half a game to play.

With Rote crisply directing the attack, the Lions tallied four more scores in the second half as they completed a 59-14 rout. Rote turned in his greatest performance as a pro. In addition to scoring on a short run, he hit on 12 of 19 passes for 280 yards and four touchdowns against the league’s stingiest pass and scoring defense.

Rote was the toast of Detroit. The Lions, confident in his demonstrated abilities, felt safe trading Layne to Pittsburgh early the following season. But Rote and the Lions never came close to duplicating the magic of 1957, and after two poor seasons the quarterback moved on to the Canadian Football League. In 1960, his first CFL season, he directed the lowly Toronto Argonauts to an unexpected divisional title while setting a league record with 38 touchdown passes.

Three years later, in 1963, Rote was slinging passes for the San Diego Chargers of the American Football League. It was a repeat of his first season in Detroit. He guided the Chargers to a divisional title, then engineered a 51-10 rout of Boston in the championship game. He scored the title game’s first touchdown on a short run, and finished the day completing 10 of 15 passes for 173 yards and two touchdowns.

Rote took the Chargers into another title game in 1964, where they lost to the Buffalo Bills. After an abbreviated comeback with Denver in 1966, the veteran quarterback finally retired, having proven himself a winner in college and three different pro leagues.

Rote, who had settled his family in Michigan, was 72 when he died of a heart attack inside a Saginaw hospital in 2000. He left behind a unique legacy as the only man ever to quarterback a team to championships in the NFL and AFL.