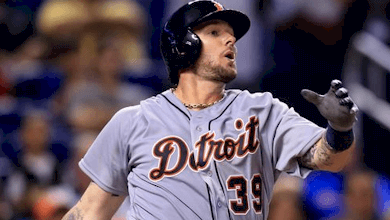 Through the first two weeks of the 2016 season, Jarrod Saltalamacchia leads the Detroit Tigers in home runs and runs batted in.

In the first week of the season James McCann goes down with a right ankle sprain. So, what does the club’s backup catcher and veteran Jarrod Saltalamacchia do? He steps right in and literally goes to bat for the Detroit Tigers.

The switch-hitting catcher has been a godsend for the Bengals so far, with five home runs and 14 RBIs through seven games. Those are both league -leading totals through Tuesday and several of his hits have been crucial to Detroit victories.

In a lineup suffering from a lack of left-handed bats (only light-hitting centerfielder Anthony Gose, fourth outfielder Tyler Collins, switch-hitting utility infielder Andrew Romine and switch-hitting designated hitter Victor Martinez can also hit from the left side), Salty has been the perfect antidote since joining the ballclub as a free agent this past offseason.

While former Tigers backup catcher Bryan Holaday has hit below the Mendoza Line so far in his time with the Texas Rangers, including a sub-.200 batting average against right-handed pitching, Detroit’s new 30-year-old backstop has done so much more.

While it goes without saying that those splits against righties are not sustainable, his larger body of work has proven that he can efficiently hit righties over the course of a full season.

For his career, Saltalamacchia has slugged an impressive .454 and has recorded an OPS of .780 against right-handed hurlers, which is 100-plus points better than Holaday’s OPS versus RHP (.654).

Salty also has more natural pop in his bat, with 102 career home runs to his name compared to Holaday’s three. Number one-hundred came in dramatic fashion already this season: a grand slam against the Pirates last week in Pittsburgh.

Thus, there’s no debate that Salty is a clear-cut upgrade over Holaday at the backup catcher position.

There is only one more player to compare the former first-round draft pick of the Atlanta Braves to, and that is the executive vice president of club operations and general manager Al Avila’s son Alex Avila.

As many of you already know, the 29-year-old Avila held the starting catcher position in Motown for the good portion of five seasons (2010-14) and then spent last year serving as McCann’s backup and logging time at first base while Miguel Cabrera was injured.

The 2011 All-Star Game starting catcher for the American League and one-time Silver Slugger winner (2011) constantly battled injuries in the subsequent seasons of his stint in Detroit, which severely impacted his production at the plate.

According to FanGraphs, that poor of an OPS means that Avila was a below average hitter from 2012-15. I think many Tigers fans will agree with that evaluation.

As for how the current White Sox catcher stacks up with Salty, let’s look at how the left-hander has fared against righties throughout his career.

For his career, Avila has hit .250 and has gotten on base at an impressive .356 clip while producing an OPS of .776 against RHP.

While those numbers are on par with Salty’s career marks versus right-handers and his OBP is 30 points better (Salty’s is .326), there’s no doubt that Salty has more of the knack for hitting the long ball against RHP.

Saltalamacchia has hit 22 more big flies in his lifetime vs. RHP (81 in comparison to Avila’s 59), and has only played in 63 more games vs. RHP (stat applies to games played before the White Sox’s contest with the Los Angeles Angels April 18th).

There’s also this: Through seven games and 22 plate appearances this year, Avila has produced a .150 BA, .227 OBP and .150 slugging percentage against right-handers.

And if you’re a fan of sabermetrics, you can simply look at each player’s wins above replacement total over the last three years to get a gauge of the difference in production.

Plain and simple, Salty is the better player at this point, and the Tigers are better off with him behind the plate in the absence of McCann than Avila.

Avila’s father Al also knew that such is the case, and made the right decision in allowing Alex to join forces with the AL Central rival White Sox.