Scherzer has a chance to shape his legacy in Game Seven 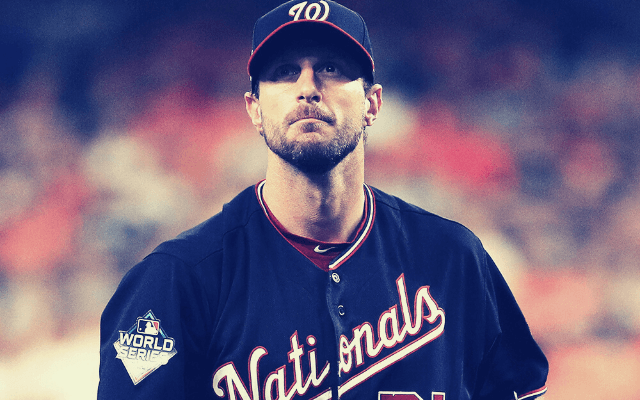 Once, when he was a member of the Detroit Tigers, Max Scherzer nearly broke his toe when he kicked the dugout wall at Comerica Park. His teammates got a chuckle out of it, because well, his toe wasn’t broken, and…the incident occurred in a game where Scherzer wasn’t even pitching. The impetus for Max’s outbreak of frustration was a double play that ended a Tigers’ rally.

To say Scherzer is intense, is a vast understatement. His intensity is legendary. It’s as plain as the two (different) colored eyes on his face.

His intensity has brought Max accolades and achievements that jump off the back of a baseball card. It’s brought him tens of millions of dollars. But still, Scherzer sits in a shadow, a shadow he knows very well.

For many years Scherzer sat at the foot of Justin Verlander, his teammate in Detroit, and arguably the greatest pitcher thus far in the 21st century. When Verlander put in extra work, Max took note. When JV increased his between-start conditioning, Max did too. When Verlander developed a signature “game face”, Scherzer worked on his. Like Luke Sykwalker with Yoda, Scherzer learned from the master. But just like the kid with daddy issues in Star Wars, Scherzer eventually eclipsed his teacher and went out on his own to battle the dark side. Now, years later, he has a chance to show his mastery of The Force on baseball’s biggest stage, with his Yoda watching.

Since he scooted out of Detroit, Scherzer has won two Cy Young Awards and three strikeout titles in Washington D.C. He’s tossed not one, but two no-hitters, one of them a near perfect game. With his fire-breathing spirit on the bump, Scherzer’s legend has grown. He’s the heart of this Nationals team that sits one victory from winning their first World Series title. And on Wednesday night, The Stomper, The Man With Rainbow Eyes, Mad Max, will take the ball while Verlander sits in the Houston dugout, an 0-6 World Series record hanging around the neck that gets kisses from Kate Upton.

Verlander has a ticket punched for Cooperstown, he has all the honors, and one more no-hitter than Max. He’s got the super model wife, and just two Octobers ago, JV got the World Series trophy too. Teammate Jose Altuve, the Mighty Mite of Minute Maid, famously said during the celebration, “I love Justin Verlander!” Add as many exclamation points as you want to that interjection, it’s all good.

And that’s how baseball feels about Justin Verlander: he’s loved. But Max Scherzer, the man who throws his arm at hitters in a way that makes it look like his insides will shoot from his belly button, he’s still got something to prove. He still hasn’t tasted the sweet nectar that flows in a clubhouse after winning the Fall Classic. He still hasn’t had his big moment on stage. In Detroit when he pitched in the rotation with Verlander, it was never going to be Max in the big, big game. Not the biggest of the biggest games, that was Verlander’s domain. JV pitched and won two winner-take-all Game Fives in Oakland, delivering the Tigers to the next round, while Scherzer watched from the sidelines.

But tonight, deep in the heart of Texas, it’s Scherzer’s time to make Verlander watch. It’s Mad Max time, and if he wins Game Seven, pitching like he can when he’s on his game, the former Tiger can exorcise some demons and thrust his name into the same sentence with his former mentor.