Scully was part of the soundtrack of the Tigers’ 1984 season 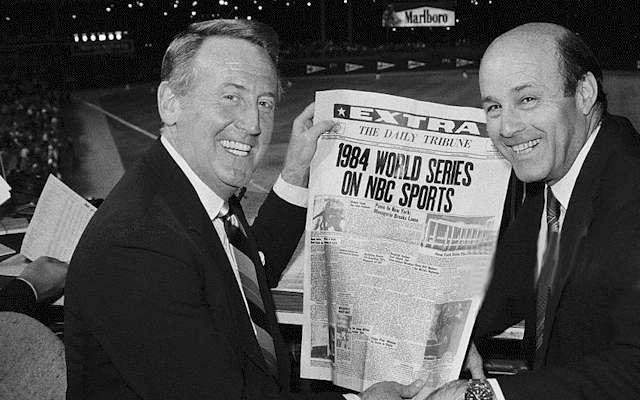 Vin Scully and Joe Garagiola before Game One of the 1984 World Series in San Diego.

This week, Vin Scully will call his final baseball game and with that, an era of broadcasting will come to an end.

If there was anyone who was in the class with Ernie Harwell and had a place with the legends of baseball voices, it’s Vin Scully, who described his first Dodger game way back in 1950 when Harry S Truman was president.

Fortunately for the rest of the country, Scully was on air for several national telecasts of the World Series, allowing baseball fans everywhere to hear his wonderful work.

In 1984, Scully was working for NBC on select national telecasts and the World Series. As a result, the famed broadcaster had a bird’s eye view of some of the biggest moments of the Detroit Tigers magical ’84 season. In a way, Scully’s voice served as bookends for that championship year.

On April 7, 1984, Scully happened to be working the Saturday Game of the Week broadcast with partner Joe Garagiola at Comiskey Park, a game pitting the Tigers against the White Sox. Detroit’s ace Jack Morris was on the mound, and desoite it being only his second start of the young season, he was in mid-season form. He mowed down Chicago batters, wriggled out of a bases loaded jam caused by a few walks, and fluttered his split-finger fastball past the Pale Hose until he had them hitless through eight frames. The game was long decided, and now the only question was whether Morris could etch his name in the history books.

Scully (like Harwell on the radio) ignored the silly unwritten rule which says you shouldn’t talk about a no-hitter in progress. He knew the history of the moment was part of the narrative. In games like this, a gifted broadcaster like Scully knew well how to put his storytelling skill on display.

As the ninth inning started:

The members of the cast: the star Jack Morris; Lance Parrish behind the plate; Dave Bergman, Lou Whitaker, Alan Trammell, Tommy Brookens on the infield; Larry Herndon, Chet Lemon, and Kirk Gibson in the outfield.

Morris goes to 2-and-2 on Luzinski and then he slips on the mound as he throws a pitch into the dirt and wide of the plate.

He’s not pitching right now, he’s throwing… The emotion has gotten to him… Who can blame him.

What a masterful line.

Morris walked Luzinski in a borderline pitch, and Scully spoke for all Tiger fans who groaned at the call:

They might have been looking at the pitch with their hearts instead of their eyes.

Comiskey Park was actually filled with boos after the ball four call, the hometown fans actually hoping for history at this point, even if it means their Sox are held hitless.

Ron Kittle was the next batter, and Morris quickly got two strikes on him. On the 1-2 pitch he fluttered a pitch out of the strike zone that Kittle couldn’t help swinging at:

Got him swinging! And Morris has his no-hitter!

After a silent display of the celebration, Scully put an end note on the Morris masterpiece:

And then there were none.

If it couldn’t be the regular Detroit broadcast team, who else would Tiger fans want to call that game? Even though it was only the fourth game of the ’84 season, the Morris no-hitter seemed to indicate that something special was happening. The Tigers won their first nine games, 18 of their first 20, and so on, until they were out in front like Secretariat at the Belmont, 35-5 with everyone far back in their rear view mirror.

Six months later, Scully was back, behind the microphone for the 81st World Series, pitting the Tigers against the NL champion San Diego Padres. On Sunday, October 14, the Tigers were at home for Game Five, up three games to one on the overmatched Padres. One more win and the club would be champions, capping off one of the most dominant seasons in baseball history. In the eighth, Detroit was clinging to a 5-4 lead when they put two runners on. Kirk Gibson, their emotional leader with the football pedigree, was coming to the plate with first base open and one out. Everything pointed to a free pass. But after a mound meeting by the Padres, they decided to pitch to the Tiger right fielder. The mood in the ballpark was growing louder and more intense, and Scully was there to tell the story:

You know what’s interesting? Kirk Gibson made his major league debut … His first at-bat in the big leagues against Goose Gossage… That’s a great way to break in… And Gossage struck him out on three pitches … And maybe because of that, Gossage said ‘I can get him.’ … Well, we’ll see…

The infield is up … They give Gibson the left field foul line … Brown is in left… AND THERE IT GOES!

The baseball exploded off Gibby’s bat and soared into the upper deck in right field at Tiger Stadium.

And as Gibby rounded the bases and the ballpark went berserk as Detroit fans realized this game was basically over and their team was going to win the championship, Scully was silent. He allowed the viewer to soak in the tremendous roar from Tiger Stadium.

The drama of the moment. The determination of Gossage to face Gibson. The backstory about Gibson’s first plate appearance in the big leagues. All set up expertly by Scully, followed by the home run and the emphatic closing moment of that season, and Scully staying out of the way.

Gibson circled the bases, delivered half a dozen hand-breaking high fives, and bounded his way into the home dugout, and yet Scully still remained quiet. Four full pitches were thrown to Lance Parrish while the ballpark shook with applause and the emotion of the city. Still, Scully did not speak a word. That was the genius of the great broadcaster. Finally, he broke the silence:

“I have a distinct feeling that Goose Gossage talked Dick Williams out of the intentional walk,” Scully said simply. A short sentence that added to the satisfaction of the moment for Detroit fans.

An inning later, Scully was quiet again as Tony Gwynn hit a soft, sinking fly to left field that landed in the glove of Larry Herndon to give the Tigers their fourth World Series title. A perfect team who started the season with a nearly perfect record, had completed a perfect season. If it couldn’t be Ernie calling the final games on national television, Scully was the perfect voice for it.

Thanks Vin, for being a large part of baseball for so many years, and for being part of the soundtrack of the 1984 season.

Game Five of the 1984 World Series at Tiger Stadium called by Vin Scully for NBC Sports: