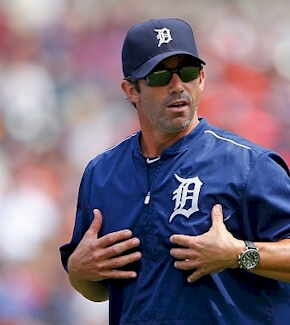 Many fans are frustrated with the managerial style of Brad Ausmus.

It’s time to make a declaration that has been fairly obvious for several weeks, if not several months: time is up on Brad Ausmus’ managerial stint with the Tigers.

The Tigers fell seven games under .500 on August 25 — their most games below the .500 threshold since they finished the 2008 season 14 games under, and they continued the downward trend the rest of the month of August, winning only one more game.

It became the most recent sign of the season being unsalvageable, and there is no way of getting past the fact that Ausmus will be the scapegoat for the club’s woes at the end of the season.

Should he be, though?

According to many Detroit fans and team observers, the answer is a definite “yes.”

Whether it be because of his late-game bullpen mismanagement issues, which date back for a lot of fans to the second half of last season, or his lack of aptitude handling veterans and gaining the respect of them (i.e. former Detroit ace David Price), the Dartmouth graduate has royally screwed the pooch.

And I would not be fully describing his ineptitude as club skipper without mentioning that he failed to move Victor Martinez, who has been in a season-long funk at the plate, down to fifth in the batting order behind J.D. Martinez until the club’s final game in August.

Or without mentioning that his hiring and retaining of by former club president and general manager Dave Dombrowski likely played a role in Dave D’s demise with the franchise and premature firing by longtime club owner Mike Ilitch.

Dombrowski is easily the greatest GM I’ve seen in my time as a fan of the Bengals, and the inefficiencies of Ausmus helped usher him out of Detroit before he could finish out his contract.

It brought about the end of a glorious era in Detroit that began with tough times in 2002 but took a turn for the better in 2006 with the hiring of Jim Leyland and the club’s subsequent trip to the Fall Classic in the same season.

A hardcore Dombrowski backer, like myself, will never forgive Ausmus for playing a part in bringing an end to arguably the most successful decade in franchise history.

I say arguably only because the Tigers failed to capture the grand prize of a World Series title during the decade.

New club president and former Dombrowski right-hand man Al Avila is not likely nor should he be expected to use the above reason as any sort of ground for Ausmus’ dismissal.

But do not worry about whether or not Avila will find a reason to hand “Sexy Brad” his walking papers.

He has plenty of them at his disposal, and in his first big move as the head of the Tigers’ front office, he needs to only enact one of them to bring upon the end of Ausmus’ tenure as Detroit skipper.

And if he has trouble remembering any of the bad bullpen decisions and other in-game “brain farts” made by “Big Bad Brad” over the course of the last year and a half-plus, I’m only a phone call away.

4.7
5
4 weeks ago
I have ordered from here several times, both having had items shipped as well as picked up at the shop. Their products are high quality, their prices are great, and the service is even better. I received my custom jerseys in less time than I would normally expect to receive one that's kept in stock. The shop does not have nearly as much displayed as is available on the website (though there are a few small displays), but it is very neat, clean, and you are greeted as soon as you walk in. And they have no problem checking in the back for various other sizes or designs. Lynn was very accommodating, working with me both over the phone and in person to make sure my kids got the perfect Christmas presents. As a Tigers season ticket holder (which comes with a discount for the official team shop), I'm still going to buy all my Tigers swag here from now on. Oh, and they're a locally owned business!
5
2 months ago
I sent Vintage Detroit a Tigers jersey to customize, and they did an amazing job. The quality is terrific, their customer service was fantastic, and they were up front and clear about their whole process. If I ever need a Detroit sports jersey customized, they are my number one to return to!
5
2 months ago
Talk about an excellent operation. My fiancé and I flew in for the home opener. I had never been to Detroit for a game despite being a lifelong fan. So I needed gear. Specifically I wanted a Datsyuk jersey. Color me shocked when we arrived and were greeted by the nicest lady! They even got the jersey down and stitched while I finished picking out what I wanted. The quality is second to none and I’m beyond happy with all my purchases. Will be ordering some more soon! They made us feel welcome and gave us a lot of pointer on food and traffic -again the nicest people and top tier product that is priced extremely fairly!
5
2 months ago
Fantastic customization for Red Wings jerseys, they had it done within 45 minutes and the stitching was fantastic and everything I could’ve hoped for. I highly recommend this place for any jersey customizations or general sports merchandise.
5
a month ago
Great guys. Great service.