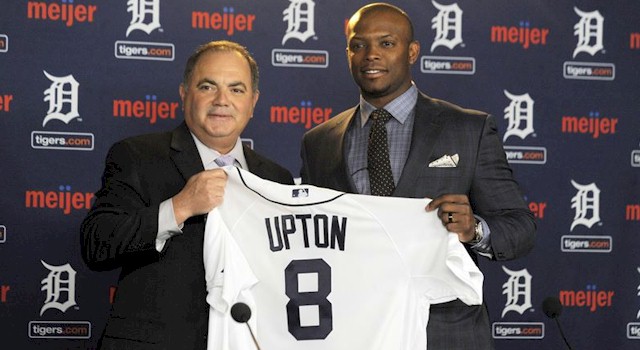 Al Avila poses with Justin Upton with his #8 Tigers jersey at the press conference announcing his free agent signing.

The Detroit Tigers are moving up in the baseball world, and it’s because of one guy: Justin Upton, the club’s most recent free agent signing.

Using the deep pockets of owner Mike Ilitch, the Tigers inked the former No. 1 overall pick to a six-year, $132.75 million deal that includes an opt-out clause after two years.

Done deal! Excited to officially be a @tigers Looking forward to meeting my new teammates and fans pic.twitter.com/YaPkY75CXc

In doing so, Detroit filled its glaring void in left field in a big way. And in a tad bigger fashion than reuniting with someone, like say, Ryan Raburn, one of the favorite players of former club skipper Jim Leyland.

Okay, I’ll admit. I’m joking about Upton filling the Tigers’ LF void in only a “tad bigger fashion” than the addition of Raburn — a lifelong utility man — would have.

For those who don’t know, the reason why is a simple one: Raburn has never played in more than 121 games in a single season or been able to hold down a starting spot for a full season whereas Upton has played in at least 149 games in each of the last five seasons.

That’s all the Raburn talk I can fathom for one piece.

With that being put to bed, it’s also important to point out there’s no way in which Upton’s production could have been matched by any combination of Tyler Collins, Anthony Gose and new addition Cameron Maybin.

Most importantly, Upton — although not a left-hander — provides the Tigers with a bat that hits righties very well. He has a lifetime on-base plus slugging percentage of .805 against right-handed pitching, adding flexibility to the club’s right-handed heavy lineup.

The three-time All-Star, who owns a career .352 on-base percentage, also recorded an .848 OPS against RHP in his lone campaign in San Diego in 2015.

Ian Kinsler came the closest, finishing the campaign with a .763 OPS versus RHP.

As many of you already know, looking at a batter’s OPS is not the only efficient way to measure that player’s productivity and amount of worth to his team.

It’s because the frequently discussed wins above replacement statistic is another fine tool for doing just that. It takes into account both a player’s production at the plate and his ability with the glove.

The three players who finished with better marks — J.D. Martinez, Cabrera and Kinsler — all amassed WARs of at least five, with Kinsler topping the Tigers’ roster at six wins above replacement.

Upton’s ’15 campaign was his second-best WAR season since being called up to the majors by the Arizona Diamondbacks at the age of 19 in August of 2007. His only better big league year in terms of WAR came in 2011 when he finished fourth in MVP voting and helped Arizona win the National League West, recording 6.1 WAR in the process, according to Baseball Reference.

Despite the noted great campaign put together by Upton in ’15, it fell short of matching the season produced by former Tigers left fielder Yoenis Cespedes, who accumulated 2.3 WAR in only 57 games with the New York Mets plus a total of 6.3 WAR over the full season.

Yet, it’s not fair to compare Upton and Cespedes based on one season.

For instance, Upton’s body of work over the prior two years — 2013 and 2014 — indicates that the 28-year-old will hit better consistently against right-handed hurlers than Cespedes going forward.

In comparison, Cespedes posted a .777 OPS against right-handed throwers in ’14 plus a dismal .672 OPS against the same-handed hurlers in ’13.

As for 2015, Cespedes held the advantage over Detroit’s prized offseason acquisition with a .909 OPS versus righties compared to Upton’s .848 OPS.

However, “Yo’s” ’15 campaign has the big-time feel of a typical “contract year” in which the motivation of a new contract inspires a professional athlete to exert more energy and to perform at a higher level.

You may ask yourself: “How can this dude tell that Cespedes was playing harder than ever before due to a new contract being on the horizon?”

Well, to answer your question, I simply looked at his OPS marks from the ’13 and ’14 campaigns.

Now, if you dig even deeper, you’ll find that from 2013-15, Upton posted both a better OPS and OPS+ — each point greater than or less than 100 is one percentage point above or below league average — than Cespedes.

Upton can also more than handle himself against left-handers, with a career OPS of nearly .900 against southpaws (.886).

Thus, it can be easily argued that over the course of their respective careers, Upton has proven to be the more consistently productive hitter.

And in my opinion, the fact that Upton is two years younger than Cespedes moves the needle in favor of “J-Up.”

More than likely, the fact that Upton remains under 30 years old is also one of the major reasons why Tigers executive vice president and general manager Al Avila chose to pursue “J-Up” with the long-term contract instead of “Yo.”

Applaud Avila for the decision, Tigers fans. It was the right move for your first-year GM to make.