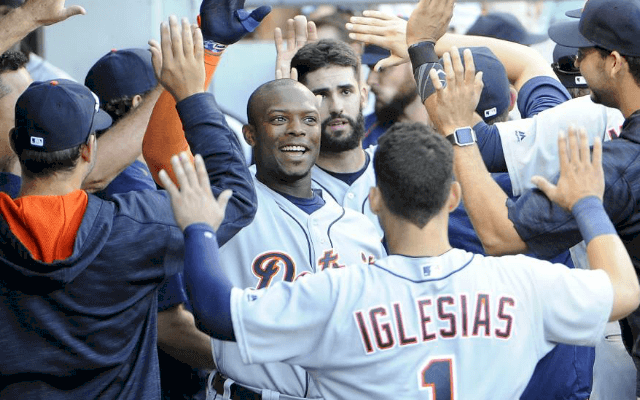 Detroit Tigers’ left fielder Justin Upton is in the middle of a celebration in the dugout after hitting a go-ahead homer in the eleventh inning on Monday against the Chicago White Sox.

Getting together with family, barbecuing and finding a comfy chair to sit outside in. In my opinion, there’s no better way to spend a sunny Labor Day. It’s a wonderful way to cap off the summer. Yet, it also serves as a reminder that the dog days of the Major League Baseball season are upon us, and that the Tigers are either in the hunt for a playoff spot or not.

If you just awoke from a nearly summer-long slumber, a quick check of the standings will tell you that the Detroit Tigers are very much in the race for a playoff spot, via the current two-team wild card format. What a refreshing change of course that is for Detroit which finished in the basement of the AL Central in 2015.

The Tigers recently have rode the hot bats of J.D. Martinez and Justin Upton along with the right arm of Justin Verlander to get into contention with less than 30 games remaining in the regular season. In fact, on Labor Day, it was Verlander and Upton, the “Two Justin’s,” who paced the Bengals to an extra-inning victory over the White Sox.

The team’s recent play has pumped some excitement back into a fan base that didn’t hold extremely high expectations for its ballclub going into the 2016 campaign, despite the signings of J-Up and Jordan Zimmermann. Many fans thought it was impossible for the club to be tied for the second AL wild card spot entering Labor Day, especially after poor stretches throughout the summer which included a seven-game losing streak in May. It led to an 11-17 mark in May, which caused many fans to call for the scalp of manager Brad Ausmus.

However, Al Avila and the club’s front office chose to stay the course with the embattled Dartmouth grad, and they were rewarded — depending on what side of the “Fire Ausmus” movement you are on — with better play in subsequent months, including an eight-game winning streak that spanned July 25 – August 3. Since the All-Star break, the Tigers are 29-19, the second-best record in baseball.

While I still would love to see Ausmus axed at the end of the season, the Tigers’ recent successful play has gotten me thinking about something else: the record the club held going into Labor Day during its run of four straight division titles from 2011-14.

Despite the club’s flaws (most notably a weak bullpen) and battle with injuries (Nick Castellanos, J.D., Cameron Maybin and Zimmermann have all missed significant time), the Tigs are largely on par with or not far off from their 2011-14 pre-Labor Day records.

As a side note, each of the following records will not add up to the same amount of games due to year-to-year scheduling differences and Labor Day falling on different dates.

I have three takes from the above:

First, in 2012, Detroit did not record its 74th victory — its number of pre-Labor Day victories in ’16 — until September 11. After doing so, they went 14-7 and took control of the division away from the White Sox who choked down the stretch in Robin Ventura’s first campaign on the South Side of Chicago. The Tigers eventually reached the World Series but fell to the San Francisco Giants in four games.

Secondly, coming off a World Series appearance and getting Victor Martinez back in the everyday lineup, the Bengals came into 2013 as preseason favorites to capture a second straight AL pennant and to win their first Fall Classic since 1984. During the ’13 campaign, they saw Max Scherzer win 21 games en route to the AL Cy Young as well as Miguel Cabrera hit 44 bombs and drive in 137 runs en route to a second consecutive AL MVP.

Even with those award-winning performances and with a rotation comprised of five arms that recorded a fielding independent pitching mark below four (the 2011 AL Cy Young and MVP winner Verlander, Scherzer, Doug Fister, ’13 AL ERA leader Anibal Sanchez and Rick Porcello), the club failed to bring longtime owner Mike Ilitch and Motown a World Series title.

It was a disappointing end to the season, and it was compounded by the fashion in which it occurred. The Jim Leyland-led Tigers lost to the Boston Red Sox in six games in the American League Championship Series.

What every Detroit fan will remember forever is how the club blew a chance to return to Comerica Park for game three with a 2-0 series lead.

In the bottom of the eighth inning of game two, the bases were loaded with two outs when then-Detroit closer Joaquin Benoit entered to face David Ortiz. Ortiz proceeded to smack a grand slam to right field which just cleared the glove of Torii Hunter. It tied up the game at five, and shifted the momentum over to Boston. The BoSox won the game in the ninth on a Jarrod Saltalamacchia RBI single.

It was arguably the worst moment during the club’s reign atop the Central.

Last but not least, in 2014, the club’s record was exactly the same as it was headed into Labor Day this year. Remember, it was Ausmus’ first year on the job, and the club went on to win 16 more games, topping the Royals by a game for the division crown.

The Tigers went on to get ousted by the Baltimore Orioles in three games in the ALDS, while the Royals went on to win their first of two straight AL championships.

And we know what happened last postseason while the Tigs were sitting home: the Royals captured their first championship since 1985.

If that didn’t motivate the Tigers to work hard during the offseason to get back to the top of the Central, I don’t know what could have possibly done the job.

They now face the challenge of catapulting the Cleveland Indians for their fifth division title in six seasons. The one thing working in favor of the Tigers is that they play the Tribe seven more times before the season draws to a close.

While rising to the top of the division is a longshot at this point, Detroit should be helped by a relatively easy schedule the rest of the way, including its current series with the White Sox, seven more games with the last-place Twins and a three-game series with the NL-worst Atlanta Braves to conclude the season.

Additionally, after the club’s three-game series in Chicago with the White Sox, it will play 14 of its last 23 games at home at Comerica Park.

Everything adds up to the Tigers having a good finish to the ’16 campaign, with 88-90 wins and a spot in the one-game wild card playoff being the most likely outcome.

That’s why it’s more than fine to stay optimistic about the Tigers returning to the postseason.