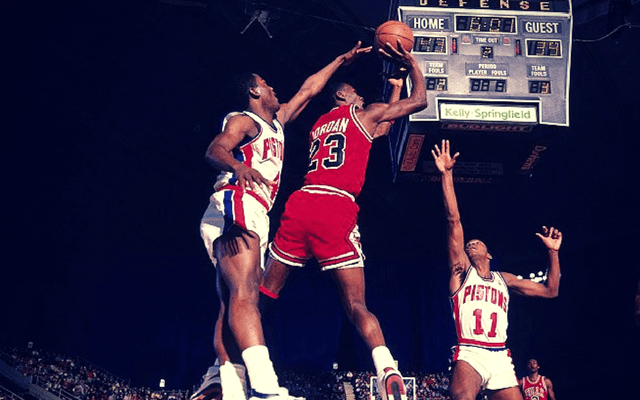 Joe Dumars and Isiah Thomas play defense on Michael Jordan during a game at the Pontiac Silverdome in 1987 between the Chicago Bulls and Detroit Pistons.

The Pontiac Silverdome, which was the home of the Lions from 1975 until 2001, is finally no longer.

In typical Lions fashion, the demolition of the stadium couldn’t even be handled properly. It took two tries for the upper ring of the exterior of the once dome-covered venue to come down.

During its heyday, the stadium was the NFL’s largest, hosting around 80,000 Lions fans on a good Sunday.

However, since the Lions moved downtown to Ford Field in 2002, the stadium had become a dead zone and a dilapidated building that stood aimlessly at the intersection of two of Michigan’s busiest freeways: I-75 and M-59.

The Silverdome still continued to serve as the host to events after the Lions departed, such as the Michigan High School Athletic Association state football finals. However, the Silverdome no longer had a major purpose, and thus, needed to go long ago.

As the arena became more of an eyesore for those living in and visiting Pontiac, memories of the good old days of the huge structure, albeit not many can be found or bandied about for Lions fans, began to evaporate.

Remember, it wasn’t just the Lions that the Silverdome hosted.

From 1978 until 1988, the Lions shared the venue with the Detroit Pistons (outside of the end of the 1984-85 season when a snowstorm caused the roof of the Silverdome to collapse and forced the Pistons to finish the season at Joe Louis Arena).

In a much shorter period of time at the Silverdome, the Pistons achieved far more than the Lions.

The Lions won a grand total of one playoff contest at the Silverdome. It came on January 5, 1992, in a 38-6 victory against the Dallas Cowboys, and it remains Detroit’s lone playoff victory since 1957.

Meanwhile, the Pistons made two straight trips to the Eastern Conference Finals during the 1986-87 and 1987-88 campaigns, and made their first ever NBA Finals appearance during the 1987-88 season (when they narrowly lost to the Lakers in seven games). It was the first of three straight trips to the Finals, and it marked the beginning of the greatest era in Pistons basketball: “The Bad Boys” era.

Because of the grand size of the Silverdome, the Pistons were also able to set franchise attendance records while calling Pontiac home.

The Pistons drew a franchise-record 61,983 fans for a contest vs. Larry Bird and the Boston Celtics on January 29, 1988.

In the season before the Pistons made the move to Auburn Hills to play at The Palace, they set an attendance franchise record with 1,066,505 fans.

These are attendance marks that will never be touched as the result of the difference in size among the Silverdome, The Palace and Little Caesars Arena, the current home of the Pistons in downtown Detroit.

The Palace had the capacity for 24,276 Pistons fans a game, while Little Caesars Arena can hold as many as 20,491 fans for a Pistons contest.

With an average of about 17,339 fans a contest through 12 home games this season, the Pistons don’t have to worry about not having enough room for fans. Instead, they have to worry about getting fans to show up at the multi-purpose arena (also the home of the Red Wings and concerts).

To mitigate the problem that the Pistons have had in drawing fans to LCA, maybe they should start putting up a curtain to block off part of the arena.

I say that in jest, as it’s what the Pistons had to do while playing at the Silverdome to cover up the empty seats.

Even with some of the arena blocked off, the Silverdome would still get loud for Pistons games. However, it was noticeable to the players and fans alike that the court was far removed from the stands.

“You just didn’t have the comfort of the crowd being right there,” Tyler said. “I think it was a little bit pushed back. But for the most part, when the Pistons started winning and people started coming out to support the team, it could be very, very loud in there. And I think it worked out to the Pistons’ advantage.”

The Pistons were clearly mere tenants of the Pontiac-owned arena, and the players could tell, too.

“The Silverdome was a great place for football, but for basketball, it was different because it was so big,” Tyler said.

The Silverdome will never be remembered as the home to a ton of great Lions football or as the greatest venue for watching Pistons contests.

However, for the millions and millions of Lions and Pistons fans that frequented the building, it will be remembered as a one-of-a-kind arena that was able to wow fans with its sheer size but also able to wear out its welcome in its final years.