Six Tigers have lost no-hitters with one out to go 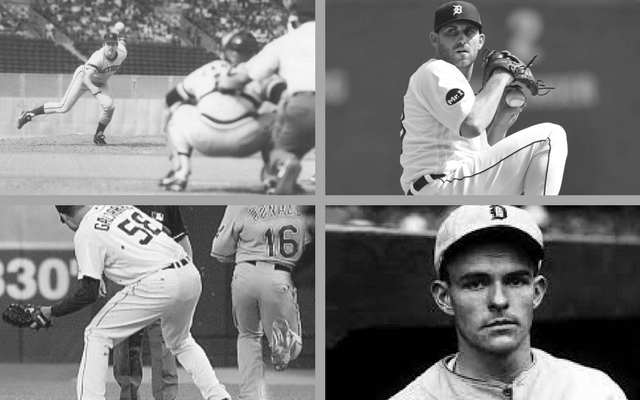 Clockwise from top left: Milt Wilcox, Matthew Boyd, Tommy Bridges, and Armando Galarraga. Each of these Detroit pitchers lost no-hitters in the ninth inning with two outs. All except Boyd lost perfect games.

Matt Boyd lost a no-hitter Sunday in excruciating fashion, on a double with two outs in the ninth inning at Comerica Park. The Tigers have lost five other no-hitters in their history with one out to go. Cruelly, three of these foiled no-hitters would have been perfect games.

The diminutive pitcher future manager Mickey Cochrane called “150 pounds of sheer guts” was untouchable on this day at Navin Field, striking out a season-high seven with his knee-buckling curveball. He had a perfect game after 26 batters. With the score 13-0 and the game miles out of reach, Washington manager and future Hall-of-Famer Walter Johnson pinch hit for his pitcher, and Dave Harris lined a single to left-center. Bridges retired the next batter to complete the one-hitter. As Joe Cox describes in his recent book Almost Perfect, Johnson’s decision was widely debated: some Tigers publicly criticized it, and the Sporting News asked “Was It Sportsmanship?” Bridges gracefully said Johnson made the right call and added, “Besides, any pitcher would prefer a bona-fide one-hitter to a gift no-hitter.” The following season, Bridges took a no-hitter into the ninth inning three times and lost each one.

Three weeks after losing his infant daughter in a car accident, Art Houtteman was on the mound at Briggs Stadium. After a walk and an error in the second inning, Houtteman was perfect for 22 batters and had one more to go in the top of the 9th. Houtteman had been on the losing end of Bob Lemon’s no-hitter in 1948, despite not allowing an earned run to the Indians in the 2-0 loss. Today the Tigers had tagged Lemon for seven runs in five innings and had racked up a 13-0 advantage. According to his SABR biography, Houtteman shook off catcher Joe Ginsberg’s sign for a curve and went with a fastball, which Harry Simpson blooped to left field. “This was the only pitch I shook Ginsberg off the whole game,” Houtteman lamented. Houtteman went on to 20 losses on the season as the Tigers suffered their first 100-loss and last place season in franchise history. Meanwhile, Virgil Trucks (who was charged with 19 losses of his own) threw two no-hitters that year.

The 1983 season would be a good one for the White Sox, ending in their first trip to the postseason since the 1959 World Series. But on this chilly day at Comiskey Park, Milt Wilcox had the White Sox baffled. After 26 straight outs, only pinch-hitter Jerry Hairston stood between Wilcox and a perfect game. Hairston jumped on the first pitch and struck it solidly to center field, denying Wilcox his perfecto and disappointing Tiger fans. Unbelievably, Hairston would come to the plate in a similar situation 51 weeks later, on a chilly April Saturday at Comiskey with Jack Morris working on a no-hitter in the eighth. Hairston led off the inning with a sharp line drive to first that defensive replacement Dave Bergman swallowed to preserve the no-no for Morris, kicking off an unforgettable season.

No Tiger had thrown a no-hitter at Tiger Stadium since Trucks in 1952, and no pitcher had done it since Nolan Ryan in 1973. If anyone could do it, Terrell seemed to be the right man, considering his amazing success pitching at The Corner.

On this night, in his signature workmanlike style Walt Terrell set down 16 straight Angels and was one out away when Wally Joyner knocked Terrell’s first pitch down the right field line for a double. It was the second no-hitter Joyner broke up in the ninth that season. The Tiger Stadium crowd groaned and then gave Terrell a standing ovation. Terrell proceeded to coax Reggie Jackson to fly out to end the game.

This is the one guy on this list who did it, who finished it out, fielding the throw from Miguel Cabrera and triumphantly stepping on first base for the 27th consecutive out. For a half second, Armando Galarraga and everyone else at Comerica Park celebrated a perfect game. Then, of course, first base umpire Jim Joyce fatefully signaled “safe.” It was a terrible call that cost Galarraga a place in history.

As exasperating and cruel as it was, the aftermath elevated the episode into one of the most memorable and celebrated displays of sportsmanship in recent memory, with Galarraga graciously appearing with Joyce at home plate the following day and both men modeling how to handle imperfection with grace. More tangibly, the episode helped lead to the expansion of instant replay, which, for all its flaws, ensures that a blatantly blown call will never again take away a perfect game.

Justin Verlander (twice, including in 2015 when Chris Ianetta struck chalk on the left field line) and Anibal Sanchez (thanks, Joe Mauer) have both taken no-hitters into the ninth inning in recent years, but only Boyd has gotten within one out of a no-no. In a season that saw him demoted to Triple-A and rack up an ERA above 6.00, Boyd put it all together on Sunday against the White Sox before Tim Anderson’s double with two outs, missing out on history.

Each pitcher on this list of Tigers retired the next batter after losing their no-hitter. Recovering that quickly from losing a no-hitter after being so close—especially when it was a perfect game, especially on a blown call—and then gathering yourself to finish with a one-hitter is a feat of its own.