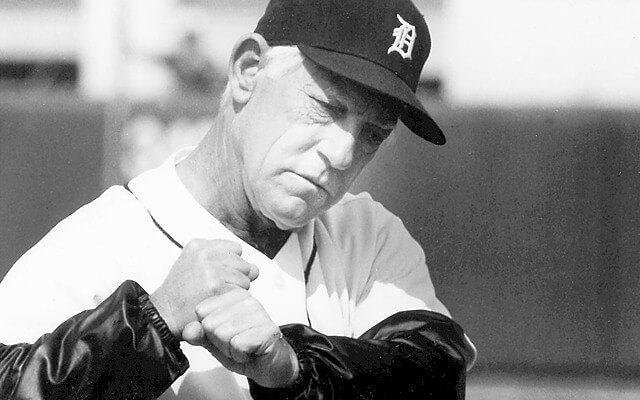 “Bring back Ralph Houk,” outfielder Steve Kemp said, only half in jest, as he left the field in Tigertown during the first full workout of spring training in 1980.

There was a new sheriff in town.

Sparky Anderson started his first spring camp with the Detroit Tigers 37 years ago and it didn’t take long for his players to realize things were different.

“If we’ve got to do this every day, I might not make it,” Lance Parrish sighed as he ducked in to the clubhouse to change his sweatshirt in the middle of morning calisthenics.

The rigorous first-day workout was not for show. Anderson was known for his grueling training methods and drills. He wanted every player on his roster to be in top physical shape and to understand how to perform any task on the diamond.

There were two players in camp in 1980 that knew what to expect. Pitcher Jack Billingham and outfielder Champ Summers had played for Sparky in Cincinnati. Billingham endured six spring camps under Sparky from 1972 to 1977. The veteran tipped the younger Tigers off.

“I think they knew what to expect here,” Sparky grinned, “because I think Billingham told them.”

Even with the forewarning, Kemp and others who had been in Detroit for years were not prepared for the Anderson approach. With his coaches acting as his lieutenants, Sparky oversaw every aspect of the proceedings. With his team spread out over two fields, Sparky still kept a watchful eye and nothing got past him. At one point a young pitching prospect stopped short in a 60-yard wind sprint.

“Do it again!” the white-haired manager barked.

For the first time since Billy Martin was the manager, Detroit pitchers were required to run. Sparky sent his staff for a one-mile run around an adjacent track, a chore that even surprised Billingham.

The mastermind of the running regimen was new pitching coach Roger Craig, a tall taskmaster with a booming voice who seemed more like a general than a baseball man.

“There’s no question it makes them tireder while they’re doing their work, but after about ten days of it they’ll be really strong,” Craig told the Detroit Free Press. “In about ten days I’ll have them running two miles.”

At that time the Tigers were pretty happy with their everyday lineup. Sparky even compared his starting eight (minus the DH) to the World Series champion Pirates favorably. But the pitching staff, which ranked eighth in the 14-team American League the previous season, was a question mark. Craig was brought in to fix that weakness, and Sparky was going to make sure his team would not be outworked.

“I don’t know any other way to get done what has to get done,” Sparky told observers who hadn’t seen a group of Tigers work that hard in a long time.

The Tigers did finish fourth in 1980, winning 84 games. But the following year they battled to the final Sunday of the season for a playoff spot. Sparky’s methods were tough, but just the thing the Tigers needed to become winners.