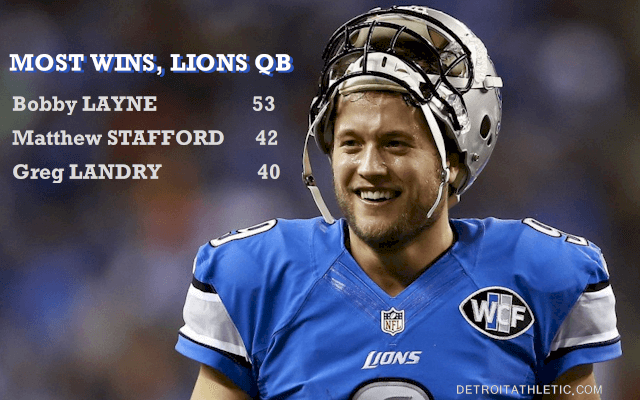 Can the Detroit Lions win 11 games in 2016? If they do, Matthew Stafford could match Bobby Layne’s franchise record for most wins.

Far-fetched? Perhaps. But it was only two seasons ago when Stafford guided the Lions to 11 wins and a playoff appearance. Last year they won seven games after starting the season 1-7. Their two-year total of 18 victories is the most since 1994-95 when they made their second and third straight appearances in the NFL Playoffs as a wild card team.

Stafford has started 93 games for the Lions and holds a 42-51 record, which is better than you’d think it would be considering how inconsistent the team has been in recent years. Stafford took over the starting job in 2009, the year after the toothless Lions went 0-16, becoming the first — and to this point only — NFL team to lose 16 games in a season.

Layne was 53-29-2 in 84 starts at QB for the Lions, of course leading the team to three NFL titles back in the 1950s. Stafford will never match Layne’s success record or his flare, but the two do have one thing in common — they both attended Highland Park High School in University Park, Texas, near Dallas. Stafford even lived in a house only a few doors down from where Layne had lived when he was a boy in Texas.

The Lions have been around for nearly nine decades but only three QBs have won as many as 40 games in their uniform. In addition to Layne and Stafford, there’s Greg Landry, who was sort of the perfect “Even Steven” as he went 40-41-3 in eleven seasons under center for the team starting in 1968. The bearded Eric Hipple is next with 28 wins, followed by the much maligned Scott Mitchell (27-30 during the Barry Sanders era in the 1990s).

After that group the list is clogged with Bill Munson (24-21-3), Milt Plum (23-25-4), Gary Danielson (23-28-1), and Rodney Peete (21-26-0). Notables they are not. No other Lion quarterbacks have won as many as 20 games for the team. Layne and Munson are the only QBs to start as many as 30 games for Detroit and post a winning record. Think about that one the next time you’re in your favorite chair on Sunday afternoon watching the Lions frustrate the hell out of you.

If we expand the frame of reference however, Layne gains a wider advantage. The gunslinging Layne, who never met a fourth quarter deficit he didn’t think he could overcome, won three playoff games for the Lions. Stafford is 0-2 in the NFL Playoffs. Sadly, Layne’s three wins in the postseason are three times as many as any Detroit QB has managed in the last 59 seasons. Who is the only Lion QB to win a playoff game since 1957? If you remember Erik Kramer, you’d be correct.

If the Lions can reverse their pattern from last season and get out to a good start (they have a fairly weak schedule in September and October), Stafford has a chance to inch closer to the .500 mark and surpass Layne sooner rather than later.

Seeing as he is under contract with Detroit through the 2017 season, barring injury, Matthew Stafford will eventually become the winningest quarterback in the history of the Detroit Lions. While that may seem like being the tallest midget in the circus, it is something.

Who was your favorite Detroit QB? Tell me in the comments section below.