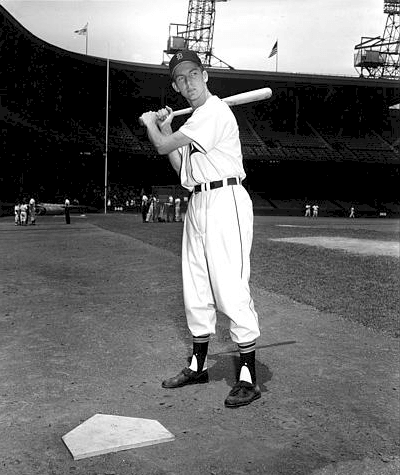 18-year old Al Kaline at Briggs Stadium in one of his first publicity photos for the Detroit Tigers in 1953.

He was just an 18-year-old kid, having spent most of his first big league season on the bench.

There was a lot of pressure on Al Kaline, a skinny kid out of Baltimore. He had signed for a $30,000 bonus, and then made the jump from high school to the Detroit Tigers without spending a day in the minor leagues. His first game wearing the Old English D was at Shibe Park in the final week of June. Since then, he had been primarily a pinch-runner and late-inning replacement in the outfield.

The 1953 season had been a lost one for the Tigers. As they headed into Cleveland for the final three games beginning on September 25, their record stood at 59-92. Only the woeful Philadelphia Athletics and St. Louis Browns had worse records in the American League. The Indians, meanwhile, had 90 victories, but were 10½ games behind the Yankees.

The series looked to be a meaningless finale to the summer. But for Kaline, it proved to be a special weekend.

He had seen action in only 28 games, collecting six hits (all singles) in 24 at-bats. Manager Fred Hutchinson did not play the youngster in the Friday opener at Municipal Stadium. He was not in the starting lineup the next day, either, an afternoon tilt. On the mound for Detroit was Ted Gray, seeking his 11th win against 14 defeats, while the Tribe countered with rookie right-hander Dave Hoskins. A former Negro League pitcher, the 27-year-old Hoskins had eight wins with a 4.08 ERA, and had not lost at home.

The game was a blowout, with four Tigers pitchers unable to stop the bleeding. Kaline came in to play center field in the bottom of the seventh inning, by which time the Indians were already up by a 12-1 score. The only Detroit tally had come courtesy of a Ray Boone home run, his 25th of the campaign.

With one out in the ninth inning, Kaline came to bat against Hoskins, who had been pitching brilliantly. Few remained of the 4,335 who had paid their way into the ballpark. With the shadows encroaching on the field, Hoskins wound up and pitched. Kaline swung and drove the ball into the left field seats for the first home run of his professional baseball career. The ball was retrieved, and Kaline kept it as a souvenir of an early highlight to his career. 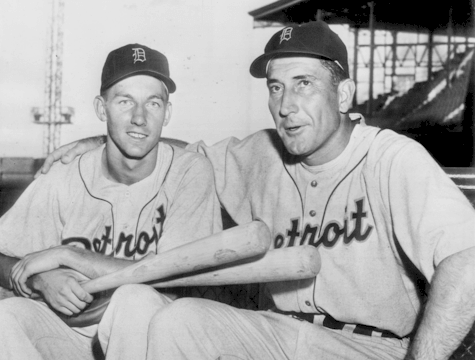 Al Kaline and manager Fred Hutchinson at Shibe Park in Philadelphia on June 23, 1953, the first day Kaline reported to the team after being signed. He made his major league debut two days later against the Athletics.

One out later, Pat Mullin, a former All-Star with Detroit in the late 1940’s, made it 12-3 with another round-tripper off Hoskins. Ironically, it was the last career homer for Mullin, who was winding down his tenth and final season. Mullin wore #6 in 1953, while Kaline wore #25. On Mullin’s retirement, Kaline requested #6, since it was the same number as his favorite player, Stan Musial.

Cleveland won the game, 12-3. The final score may have been a downer, but it was a big afternoon for the Tigers bonus baby.

It was Kaline’s second consecutive memorable game. Back on September 22nd, he had started against another former Negro Leaguer, the great Satchel Paige, against the Browns at Briggs Stadium. He’d gone 1-for-3 in that game, a 7-3 loss. (By the following season, the Browns would be playing in Kaline’s hometown of Baltimore, with a new name, the Orioles.).

Despite his limited playing time, 1953 was a promising start to Kaline’s career. By 1955, he became the youngest major leaguer ever to win a batting championship. Before Kaline, the youngest was a guy you may have heard of, another Tiger by the name of Ty Cobb.