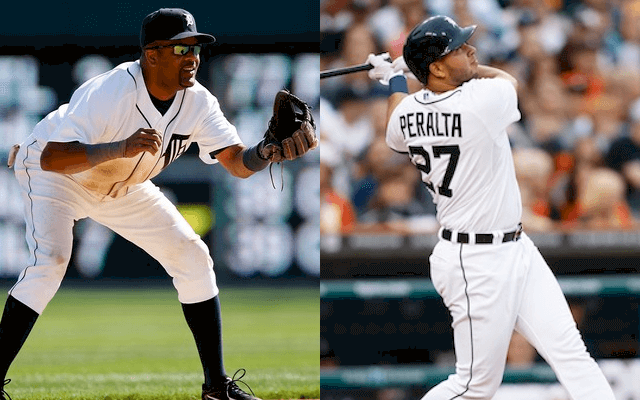 Infielder Neifi Perez and shortstop Jhonny Peralta were both suspended for violating MLB’s drug policy while playing for the Detroit Tigers.

What do you do when someone on your team tests positive for performance-enhancing drugs?

As fans, we have been programmed to hate PEDs and their destruction of the game. It is easy to boo Ryan Braun and Alex Rodriguez. But it is different if the perpetrator plays in your city.

About this time (Aug. 3) in 2007, Detroit’s Neifi Perez tested positive for PEDs for a third time and earned what was then an 80-game ban. It was not earth-shattering news since Perez was not a star player for the Tigers. But it gave the Detroit fans the first real glimpse that they could have been cheering one of the guilty.

It is easy to shrug that off as a fan. But how about the reaction afterward?

We didn’t get that with Perez, but we got it with Jhonny Peralta. In 2013, the Tigers All-Star shortstop was suspended 50 games for a positive test. He admitted his mistake and came back to join the Tigers in the playoffs, where he batted .417 against Oakland in the American League Division Series.

The cheers were thunderous, even in his first game back from suspension.

The same Tiger fans that would boo the heck out of ARod or especially Nelson Cruz (who has particularly crushed the Tigers, especially when he was testing positive for PEDs) were cheering for Peralta. I was at his first playoff game and I found it very interesting and confusing.

A standing ovation for someone who essentially was caught cheating.

It has happened like that all over the majors. Braun is cheered in Milwaukee but jeered everywhere else, as is the case with ARod and was the case with Barry Bonds. Many writers and fans don’t want to ever see Bonds, ARod, Roger Clemens, Sammy Sosa or Rafael Palmeiro make the Hall of Fame.

What is it that allows fans to put their moral compass away when it involves their own team? It’s the fact that it is their team.

Peralta obviously was a member of the Tigers, so as a Tiger fan, you don’t really want to root against him. But the thunderous ovation upon his return to the Tigers after his suspension was vexing.

In the end, the team welcomed him back because he gave them the best chance of winning. And it is the same with the fans.

Peralta moved to the Cardinals and made his third All-Star team in 2015, even being voted the starter by the fans, ironically alongside Nelson Cruz in the American League.

The same fans that have booed and booed for PED use, voted two of the guilty into the All-Star starting lineup two years later.

It just goes to show that fans put their team above any player, manager, issue or anything else, and that puts a positive energy on any situation. It certainly did in 2013 when Peralta nearly led the Tigers to the pennant.