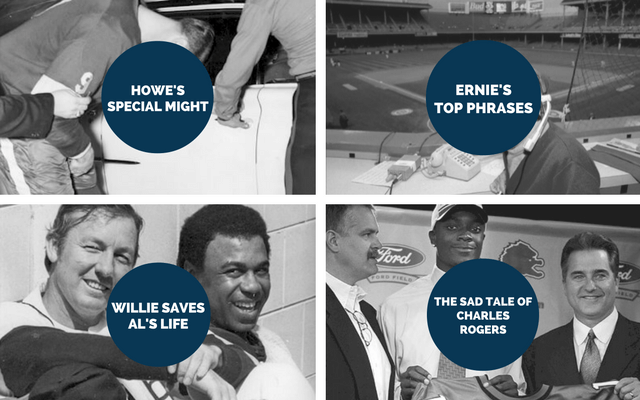 The old calendar on the wall tells us that 2016 will soon be in the books and 2017 will be here. Which means it’s a perfect time to look back at the most popular articles on our Detroit Athletic Co. blog this past year. Not all of these articles were published in 2016, which goes to show you that stories can resonate over several years. Our blog has been spinning tales since 2009 and we have thousands of articles on Detroit sports history. Here are the ten most popular in the last twelve months.

How’s that for a tempting title? Well, it’s no click-bait, this article is the real deal. Willie Horton did race to the aid of Al Kaline on the playing field in Milwaukee. He did save Al’s life. This rarely told story comes from Detroit native Bill Dow and was published by Detroit Athletic Co. in 2015.

Hockey fans around the world were saddened by the death of the great Gordie Howe in June of 2016. It’s not surprising that two of the most read articles on our blog were about #9.

This article by noted Detroit historian Richard Bak was first published in 2014. Here’s an excerpt:

“Whenever I went on the ice against the Rangers,” Howe recalled, “the coach sent Fontinato out. The idea was to work on me and distract me. Once, it cost me because I forgot a valuable bit of advice Ted Lindsay gave me. He said don’t ever drop your stick until the other man does. So we get into one game and Louie says, ‘You want to drop your stick?’ and I said, ‘Hell, yes!’ and I threw it to the ice, and the guy hit me right over the head…about six stitches worth. He nailed me, and I stood there laughing over my stupidity, and Lindsay just shook his head.”

You get the idea. Gordie was tough.

Our most popular guide, this detailed feature was written by Bruce Mason back in 2013 and has been updated since. With the Red Wings moving to a new home next season, you have to hurry to use this guide one last time.

Richard Bak shares his firsthand account of the only death in an NFL game, which occurred in a game between the Lions and Bears at Tiger Stadium on October 24, 1971. This article was published in 2011:

It’s hard to believe that it’s now been 40 years. It was a raw and dreary Sunday. A steady, melancholic rain fell all afternoon. Mary and I were seated among a large group of raucous Chicago fans. The tickets were a last-minute gift from my older brother Bob, a Detroit News printer who had either gotten them from a friend at work or, more likely, won them in an all-night poker game downtown. (He once came home with an old DeSoto that he’d won off some poor schmo with no other way to pay up.) Between the fights in the stands and the see-saw battle on the muddy turf, it was an entertaining experience.

That was the day Detroit wide receiver Chuck Hughes died in uniform on the field. It’s a harrowing article that continues to be popular with readers.

The Night the Detroit Tigers Won the 1984 World Series

Want to know what it was like to be in the middle of the wild and (at times) dangerous celebration that erupted in the streets around Tiger Stadium after Detroit won the 1984 World Series?

In this eyewitness account, Steve Thomas (founder of Detroit Athletic Co.) recounts the events after Game Five from his vantage point as a 13-year old souvenir vendor outside the ballpark:

The excitement of the crowd was quickly dampened by anxiety. People were scurrying to get to their vehicles. Others seemed too drunk to realize how much danger was surrounding them and they seemed to enjoy the bedlam.

Did you know we have a comprehensive online encyclopedia of Detroit Tigers history? Well, we do.

What will you find? Pages for every man to ever play for the Tigers, with his complete MLB stats. Brief biographies of the top Tiger greats. Pages for every team with stats and team records. And also lists like “Top Hitting Streaks in Tiger History” and “Tigers Who Spent Time in Jail” and so on. We have a list of every uniform number and which Tigers wore it, and photos of every Tiger (except 5-6 elusive guys from the early 20th century). The encyclopedia is updated each season. With more than 1,200 pages, this website is guaranteed to keep you entertained.

When Surprise Guests Brought Gordie Howe to Tears on the Ice

Another excellent story from Bill Dow. This one is about the night Gordie Howe was honored with a special night at the Olympia in Detroit in 1959, only to be surprised when his mom and dad appeared, It was the first time either had seen him in an NHL game.

This list from June of 2016 runs down ten phrases from the legendary voice and career of Ernie Harwell. From “He kicks and deals” to “It’s loooooong gone!” they’re all here.

A Short History of the Hockey Helmet

No one does history like our stable of writers. In this piece, Richard Bak teaches us about the evolution and history of the hockey helmet. From the days of leather and mockery to modern technology.

The Sad Tale of Charles Rogers

Some of the most compelling sports stories are about athletes who seemed to have it all but squander it. No one better exemplified that than wide receiver Charles Rogers, a #1 pick of the Detroit Lions who made a big splash, catching two touchdowns in his debut. It looked as if he might become the greatest receiver in franchise history. But within a few weeks his rookie season was over. The next season he was suspended, and three years later he was out of the NFL.

In this sobering article, Bruce Mason looks at how Rogers failed to live up to the hype. “I just didn’t fulfill my end of the bargain,” Rogers said. “I choked. Straight up, I choked.”