The 10 most famous photos in Detroit sports history

A picture is worth a thousand words. So this blog post is at least worth 10,000 words.

How do you select the most famous photos in Detroit sports history? It isn’t easy and in many ways it’s pretty absurd. What’s famous? How do you choose just ten? And says who?

This is my pick for the top ten: 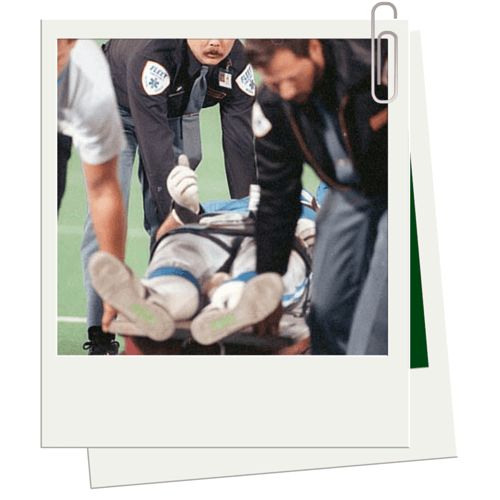 When Mike Utley was lying on the turf at the Pontiac Silverdome on November 17, 1991, it looked pretty bleak. The big offensive lineman was motionless. But as he was carted from the field on a stretcher, Utley flashed a thumbs up to his teammates and the crowd. The Lions rallied around that thumbs up signal even after it was learned that Utley was paralyzed from the chest down. The 1991 Lions went on to win 12 games and earn their first playoff victory in more than thirty years.

9. The MVP celebrates in ’84 beneath Tiger Stadium 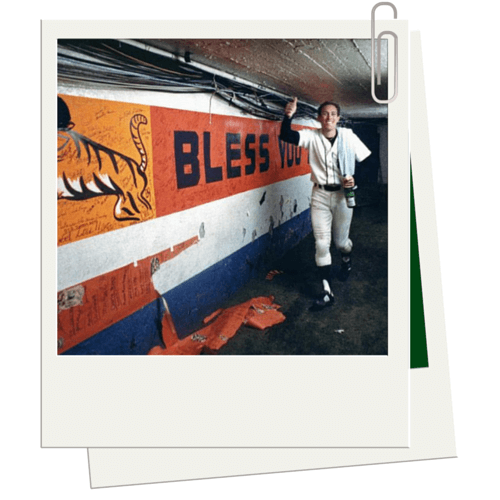 There were several great players on the 1984 Detroit Tigers, but Alan Trammell may have been the most likable. That’s why it was so satisfying to see the shortstop have a stellar showing against his hometown Padres in the World Series. He had nine hits in five games, including two homers, earning MVP honors. This photo by the Free Press shows Trammell in the tunnel under Tiger Stadium late in the night after Game Five. with a bottle of champagne in his hand, Trammell epitomizes joy in this wonderful photo. 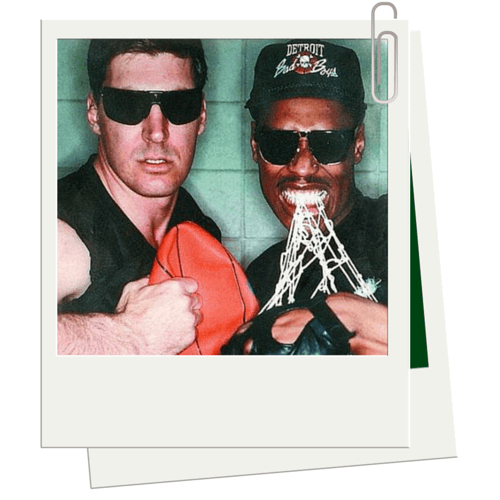 The Bad Boys Pistons were not well-liked in the NBA, but Detroit didn’t give a damn. This photo taken by a shoe company for an advertisement shows the two biggest bullies on that team: the confident and cocky Bill Laimbeer and the ultimate inside enforcer Rick Mahorn.

7. The greatest quarterback the Lions ever had 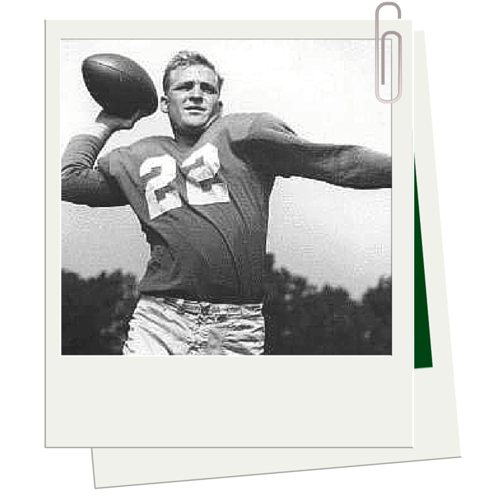 An iconic photo of the great Bobby Layne, who led the Lions to three NFL titles in the 1950s. Layne was one of the first great downfield passers in the pro football and he was especially known for two things: comeback victories and carousing. This action shot shows Layne in the air illustrating the “jump pass” that was prominent in football in that era. You’ll see this photo in many sports bars in Detroit.

6. The horrifying face of Terry Sawchuk 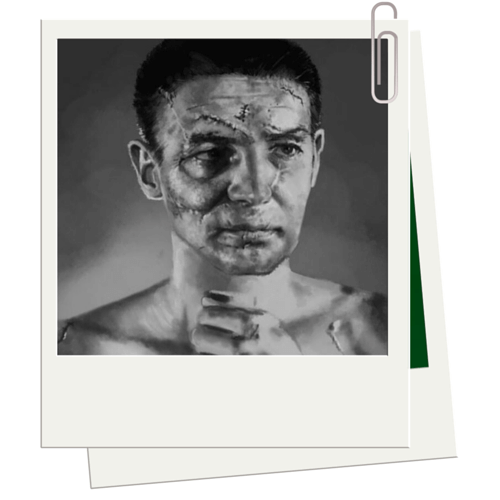 A disturbing photograph of Hall of Fame goalie Terry Sawchuk that was taken as part of a photo shoot for LIFE Magazine in 1966 (technically after he was a member of the Red Wings), in which a makeup artist applied stitches to his face to show where he’d had bruises and cuts and stitches (more than 400 in all).

5. Lou Brock is out at home 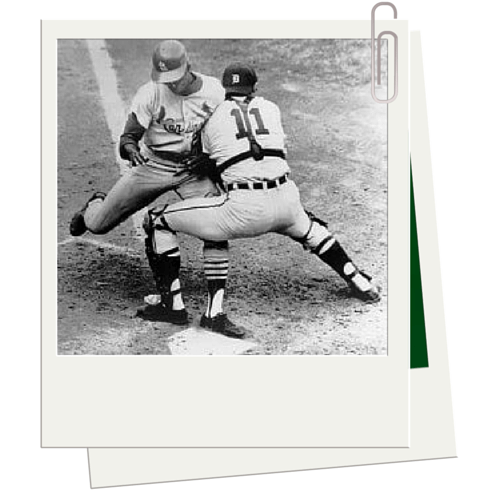 In an unforgettable moment in Detroit sports lore, Willie Horton’s throw to home plate in Game Five of the 1968 World Series arrived in plenty of time and catcher Bill Freehan was an immovable object that blocked Lou Brock’s path to the plate. For some reason Brock didn’t slide. The play swung the momentum of the Series in favor of the Tigers.

4. A cloud of dust from Ty Cobb 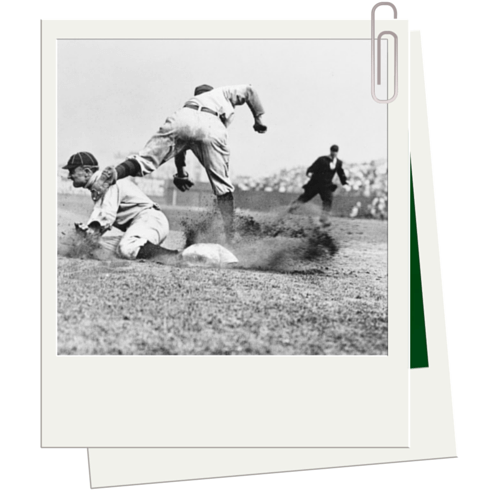 Of these ten photos this one of Cobb taken on July 23, 1910, is the most reprinted and the most important to their sport. The photo was taken by Charles Conlon, a famed sports photographer who revolutionized the way action photos were taken. Conlon positioned himself close to the action and captured thousands of amazing photographs of baseball in the early years of the 20th century. None were more historic than this one of Cobb, which Conlon caught by accident when he snapped the shutter hoping something was happening on the field (his head was under a hood as was common in those days with early photographic equipment). When he developed his film later he discovered the gritty photo of the great Cobb sliding into New York’s third baseman Jimmy Austin. The Georgia Peach has clenched teeth and a serious look of determination on his face. Conlon had captured the essence of Cobb’s playing style.

3. The Captain raises the Cup 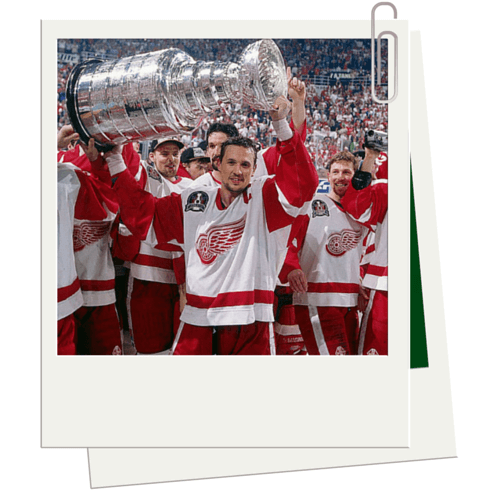 The Red Wings finally won the Stanley Cup in 1997 after 42 years of waiting. When team captain Steve Yzerman lifted the Cup above his head, the scene may have produced more flashes than any other moment in Detroit sports history. Everyone wanted to capture the historic triumph. A version of this shot is in countless game rooms of hockey fans all over Michigan.

After Kirk Gibson hit his epic home run off Goose Gossage in Game Five of the ’84 World Series, everyone knew the Tigers were going to be world champions. Gibby bounced his way around the bases, nearly broke Lance Parrish’s hand with a monster high five, and then raised his fists in the air while growling with delight. The photo of that moment (taken by the Detroit Free Press) is one of the most identifiable in Detroit history. 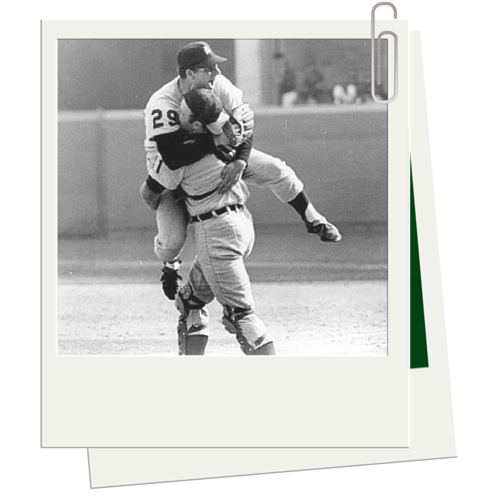 After Bill Freehan caught a popup for the final out of Game Seven of the 1968 World Series, the Tigers completed an unlikely comeback to claim the title. Pitcher Mickey Lolich leaped into Freehan’s arms and a legendary photo was born. The Detroit Tigers should have a statue commissioned of this moment and put it outside one of the entrances to their ballpark. Immediately.