The Birth of the Silverdome 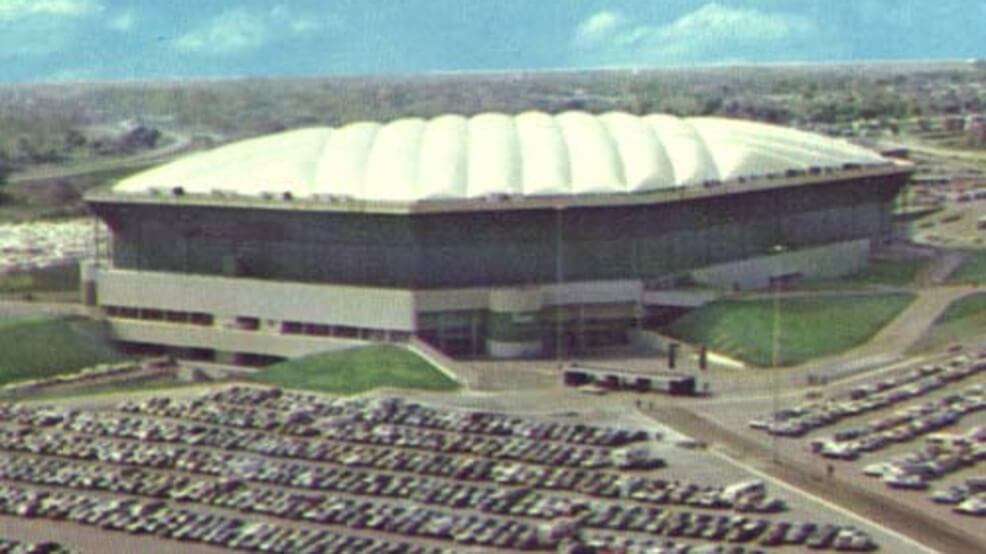 The Pontiac Silverdome opened in 1975.

The dome was never silver, it was white. But why should facts get in the way of a good name?

The birth of the Pontiac Silverdome is an unusual story marked by almosts and what-ifs. It’s a story of civic shenanigans and political intrigue, and of two Detroit sports teams going in different directions.

The Silverdome opened on October 6, 1975, when the Lions hosted the Dallas Cowboys on Monday Night Football. The Lions lost that evening, but the ABC television coverage of the new facility resulted in great publicity for the team, Detroit sports, and the city of Pontiac.

But why did the Silverdome end up in Pontiac?

It goes back to the tenacious ambition of an architect named Don Davidson, a native of Pontiac who wanted to do something great for his hometown. After going away to college and serving in the Marines, Davidson returned to Pontiac in the mid-1960s. He watched as jobs and people fled the city in the ensuing decade and felt there must be something he could do to change the fortunes of Pontiac. Davidson came up with a plan for a new stadium in Pontiac and started to knock on doors of influential people. He met with city officials, he met with Detroit councilmen, and he met with William Clay Ford.

The Ford family had been interested in a new venue for the Lions almost since the day they bought the team (the same day John F. Kennedy was assassinated back in 1963). The Lions didn’t like being second-class tenants to the city of Detroit at Tiger Stadium. In 1973, Davidson drew up an ambitious project that included a domed stadium for the football team, a basketball arena for the Pistons or college basketball, and offices and conference facilities.

There was many things that could have gone wrong with the plan. Only a few years earlier, a plan had been developed to build an 80-acre sports and retail facility on the Detroit River that would have included a retractable roof. The playing field would have housed both the Lions and the Tigers. That plan failed when city, county, and state officials started haggling over funding. The same problems threatened Davidson’s plan.

No one could agree on where to build the damn thing. Some people favored the Michigan Fairgrounds, others wanted the dome built in Walled Lake, and still others preferred to turn their attention back to the Detroit Riverfront. Once lawyers, politicians, and bureaucrats became involved, the Silverdome seemed doomed.

The mayor of Detroit at the time was Roman Gribbs, and he didn’t want the Lions to leave the city. His office put tremendous pressure on the Ford family and he tried to muscle Davidson’s group and the officials in Pontiac. For weeks, the two sides: the folks in Pontiac, and the bullies in Detroit, fought a war of words. Gribbs fought to keep the Lions in Detroit and reportedly he only gave in when he was promised a favor. What sort of favor was it (kickback?), we may never know. Ford announced his support, the Davidson plan was approved, and the city of Pontiac would get their dome. The Silverdome cost $55 million and opened on schedule, it proved to be a great project by Davidson and his group.

Did you know that when it opened, the dome was called Pontiac Metropolitan Stadium or PonMet for short? That name was never popular, and within a year it was renamed the Silverdome. The dome ended up being a point of concern almost immediately.

That brings me to the roof and the controversy over the color of it. The dome was always white, the paint was white. But seen from the sky it could appear to be silver because of atmospheric interference. There was a trick to it: if a person was walking toward it and viewing it with their naked eye, the roof looked white. But angles from above or on cloudy days the dome would appear to be silver.

On January 24, 1982, the Silverdome hosted Super Bowl XVI, the first Super Bowl played in a cold-weather city. The day of the game the outdoor temperature was 15 degrees. Snowy roads slowed traffic to the game and caused other delays, but otherwise the game was successful and a great promotion for the city of Pontiac.

In March 1985 the original fiberglass panel roof collapsed under a pile of snow. The roof that replaced it was made of a thin fabric. The ’85 collapse motivated the Pistons to build their own home a few years later, The Palace of Auburn Hills. The Lions stayed in the Silverdome until 2001, and it also hosted the Michigan Panthers of the USFL, the Detroit Express of the North American Soccer League, and the short-lived Motor City Bowl game.

After the Lions left for a domed stadium in downtown Detroit, the Silverdome quickly became a headache for the city of Pontiac. Without a regular high-paying tenant, the facility was too large, too old, too much. In 2012 it was sold to a Canadian real estate developer for a fraction of the original cost, at just $550,000. A few years later the owners announced that demolition would begin. But that demolition dragged out, taking close to four years. The last structural wall of the Pontiac Silverdome was finally felled earlier this year.