The defection of Petr Klima was like a bad spy novel, but Red Wings got their man 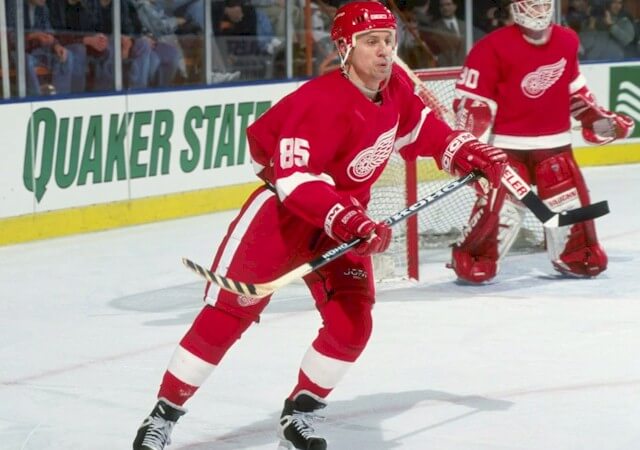 Nick Polano was a hockey coach from Ontario working for a pizza mogul named Mike Ilitch. So what was he doing sitting on the edge of a forest in Germany training his eyes on a row of trees in the early morning hours of August 16, 1985?

Like a bad spy novel, Polano was waiting for “a package” to arrive. Though the Cold War was still raging between the West and the Soviet Bloc nations behind the Iron Curtain, Polano was not looking for a packet of information or launch codes for missiles. He was waiting for an ice hockey player. Petr Klima was five minutes late.

In the 1980s the Detroit Red Wings moved heaven and earth (and spent a lot of money) to get foreign hockey players to their side. Normally that might just require a smart draft strategy, but the players Ilitch and the Red Wings wanted were off-limits. They were not allowed to travel to North America without permission from their countries. The only way to get one of those players under contract was for them to defect. But most Soviet Bloc nations guarded their hockey players like hawks. In 1985, the Wings wanted Klima, a 20-year old left wing from Czechoslovakia, a communist nation closed off from the West and heavily influenced by Moscow.

At that time very few European players had ever defected successfully, and when they did it was to a Canadian team. The Czechs were aware that Klima wanted to play in the National Hockey League, but they didn’t know how badly Ilitch and the Wings wanted him, nor to what measures they would go to get him.

The exotic dance between the Red Wings and Klima started in 1984 when the youngster was 19 years old and visiting North American for a junior hockey tournament. An official at the tournament was approached by Klima, who told he he wanted to come to the United States and make money. “I don’t want to play a decade [in Czechoslovakia] for nothing,” Klima reportedly said. The official called Polano, a former teammate in the minor leagues, and offered the information. Polano was an assistant coach for the Red Wings, having formerly coached the team and served many roles for Ilitch, who admired his hockey savvy. Knowing that other teams might soon pursue Russian and eastern European players, Polano urged the Detroit organization to get to some of them first. He wanted Klima.

But first the Wings had to secure his rights, and Polano would have to convince general manager Jimmy Devellano to use a pick on Klima.

“When Minnesota took Frantisek Musil [also from Czechoslovakia] in the second round, I never thought Klima would last,” Klima said, “Finally, in the fifth round, we had an extra pick and I talked Jimmy into taking him. He turned to me and said, ‘OK, I did it. Now, you go get him.’ ”

The wheels started moving when Ilitch agreed to spend some money in a series of “deals” that are worthy of a “Mission: Impossible” script. Reportedly, Ilitch spent as much as $250,000 to pay off various people in Czechoslovakia, thus securing a path for Klima to get out.

But that didn’t guarantee a safe defection. On that August night in Germany, Klima was supposed to be safely tucked into his hotel room in Rosenheim, Germany, where the Czech team was training. Inside information had told Polano that there would be a window of opportunity in August. Polano, Devellano, and two other Detroit officials hopped on a plane with a translator and spent more than a week passing messages to Klima through a back channel. Finally, the night arrived and Klima was instructed to sneak out of the hotel and take a car provided by a mutual friend. The car took him to another location where he was to walk about a half a mile to the car where Polano was waiting to take him to a safe location.

“We didn’t know what was going to come out of those woods,” Polano said in an interview in 1985. “I think that deep down, none of us really thought we were going to be able to pull this off.”

But Klima did show up and after several weeks of hiding out and clearing red tape, the Wings flew him to the Detroit on September 22, 1985, where he was granted a temporary visa and papers that allowed him to travel between the U.S. and Canada. How high did the Ilitch efforts reach? The Detroit front office received assistance from U.S. Attorney General Edwin Meese.

Klima was in a Detroit uniform for the 1985-86 season, wearing #85 (as he would throughout his NHL career) to commemorate the year in which he defected. He was overjoyed as well that the Red Wings had smuggled his girlfriend out of Czechoslovakia as well. As a rookie, the winger scored 32 goals and had 56 points, finishing seventh in Calder Trophy voting for the most outstanding rookie in the NHL. He played five seasons with the Red Wings, scoring 130 goals with 93 assists in 306 games in Hockeytown. Not all was perfect however, as Klima battled addiction to alcohol and off-ice problems. In 1990 he was dealt to Edmonton, where he won a Stanley Cup title and was an All-Star in 1991. The Czech played 13 seasons in the NHL and eventually became a naturalized citizen of the United States. By the time his career in North American was winding down, his birth nation had reformed and was no longer behind the Iron Curtain. Klima returned to his native land and played two seasons there before retiring for good in 2003.