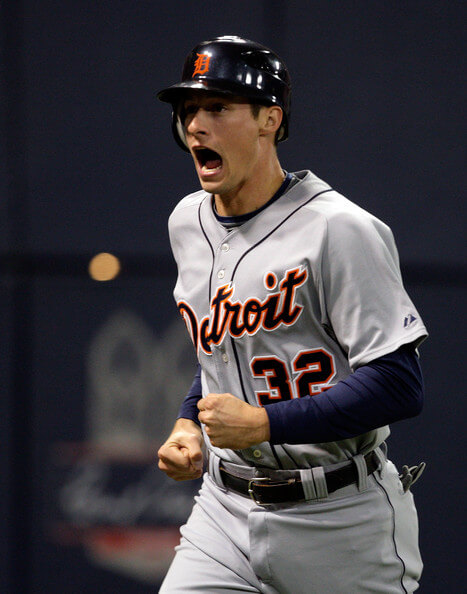 Don Kelly played parts of six seasons for Detroit, batting .234 with 23 homers in 544 games for the Tigers. He played in 24 postseason games for the team, batting .265 with one home run and three runs batted in.

Of the nearly 1,700 men who have played for the Detroit Tigers since 1901, perhaps none loved the game of baseball more than Don Kelly.

In his six years with the Tigers, Kelly played every position and ascended to folk hero status, punctuated by two important moments in the postseason. His popularity, unlikely as it was, still pops up at Comerica Park in the form of #32 Kelly jerseys in the sparsely filled stands. Detroit hasn’t forgotten their former underdog.

Maybe it was his connection to Pittsburgh that made Kelly a favorite pet to manager Jim Leyland. Kelly was born in the Pittsburgh suburb of Butler, and played baseball at suburban Mt. Lebanon High School; in his senior year the team won the Class AAA state title. He was a star shortstop and pitcher on that team. But there was also the longshot nature of his professional career, something Leyland as a lifelong minor league catcher, could identify with. Smoky always loved to have Don Kelly at his disposal, ready to take any position on the diamond, and we mean any position.

In a game in 2011, Kelly was called on to pitch with two outs in the top of the ninth inning after Leyland thoroughly depleted his bullpen in a 16–9 defeat to the Mets at Comerica Park in June. Throwing only five pitches, Don used a curveball to get Scott Hairston to fly out to center field. Kelly was the first position player to pitch in a game for the Tigers since Shane Halter. A few days later, Kelly squatted behind the plate and caught for the first time in the major leagues, checking off the last box on his baseball bingo card.

Don Kelly is long and thin with knobby knees and pointy elbows. He has high cheekbones and thin lips, and his chin is swallowed up by his neck. He did not look like a great ballplayer, and he was most certainly wasn’t a great ballplayer. But he was a passionate and dedicated ballplayer and for that, Detroit fans embraced him. He was a thin paperclip, but he was their paperclip.

He arrived in 2009, a utility player who batted from the left side. In the modern game of baseball, where the bench is non-existent, players who can wear many gloves are necessary, and Don Kelly fit that bill. It didn’t matter much that he couldn’t hit lefthanded pitching or that he swung at nearly anything tossed to the plate, he was versatile by gawd. And Leyland liked him.

Early on in his Detroit career, Kelly earned the nickname that would vault him to cult hero status in the Motor City. On one particular afternoon at Comerica Park, Kelly slapped a game-winning single that prompted mushmouth radio broadcaster Jim Price to bellow “Donnie Kelly Baby!” The name stuck, and soon it was abbreviated to “DKB” on ballpark signs and blogs dedicated to the super sub.

“I’ve never seen anything like it,” teammate Justin Verlander said. “[The fans] love him, and we love him inside this clubhouse.”

He was never more Donnie Kelly Baby than in the 2011 playoffs against the Yankees. Somehow, for some reason, Leyland had Kelly starting and batting second for decisive Game Five of the AL Division Series at Yankee Stadium. Batting second! In the first inning he smacked a pitch from Ivan Nova into the lower deck in right field for a solo homer to give the Tigers a 1-0 lead. It was Don Kelly, Playoff Hero. Kudos, Mr. Leyland.

Kelly batted .364 in that playoff victory over the Damn Yankees, then the following October he delivered another key run. In Game Two of the 2012 ALDS at Comerica Park the Tigers found themselves knotted with the A’s in the bottom of the ninth. The bases were loaded with one out, in fact the A’s had walked Prince Fielder specifically to get to Don Kelly. It was a mistake. Kelly did his job, lofting a soft fly ball to right field that was not deep, but deep enough to score the winning run. He was mobbed by his teammates, the joy spilling all over his face.

“I’m happy for him,” Leyland said. “He’s earned the right to be here, to be in that situation.”

That was what DKB was great at: doing his job. He wasn’t a superstar, he wasn’t even a star or super, and he wasn’t even very good. But he was a terrific athlete and he was always prepared. Kelly was drafted as a shortstop, a tall, thin, long-armed shortstop. He was moved to third base in the minor leagues, but along the way he showed his ability to play center field, right field, and first base well. He wasn’t adequate at those positions, he was pretty damn good. That’s a skill that few ballplayers have. Mickey Stanley could do it, and probably a few dozen other guys in the last fifty years, but no one else. Kelly was never a defensive liability at any of his positions.

His preparation was akin to that we saw from Dave Bergman and Johnny Grubb in the 1980s: Kelly came to the park every day ready to get into the game. He was on the bench holding a bat, his glove in his lap. Don Kelly wanted to play and he wanted to be ready whenever his manager hollered his name. That’s the type of character teammates and fans can fall in love with.

The Tigers asked Kelly to work for them after his playing career ended, and he served as a scout for more than a year. But last November he accepted a job as first base coach with the Houston Astros. How could he turn it down? The Astros are winners, and the first base job is seen as a stepping stone to bigger things. One day, DKB might manage a big league team. You can bet if he does, he will be prepared.