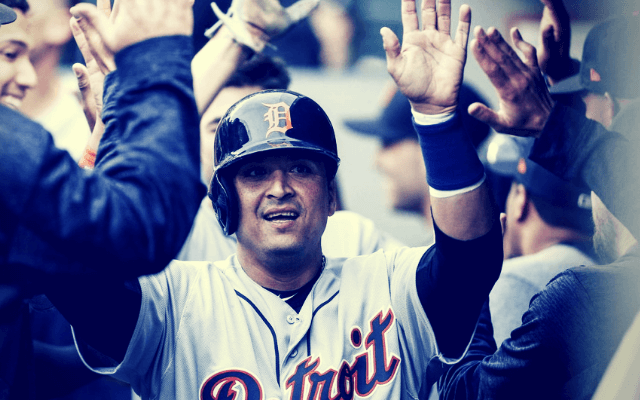 It was the final weekend of April in 2011 and Victor Martinez was staring at a stat sheet with disbelief. His name was way down the list prepared by the press relations department of his new team, the Detroit Tigers. A few inches to the right of his name was an unfamiliar number: .250. Martinez closed his eyes and tried to imagine that number away.

Martinez was the $50 million man in 2011, the newest toy in the sandbox of team owner Mike Ilitch. In the offseason the Tigers had inked the Venezuelan to a four-year contract, a deal that brought his booming bat to Motown. The season started with the switch-hitter batting one spot behind Miguel Cabrera, two spots behind Magglio Ordonez, his fellow countrymen and fellow purveyors of career .300 batting marks. But early in his Tiger tenure, Martinez was pressing.

“I was trying to earn the $50 million on every swing,” he later admitted. The veteran wasn’t trusting his highly trained professional mechanics. But a switch flipped in May.

Martinez hit .337 in May, followed by a Ty Cobb-lile .370 in June. His name was next to .316 on the stat sheet by the All-Star break. He hit .345 in the second half. The Tigers won the division title going away. An era was underway.

That was seven years ago and much has transpired. Martinez is playing for his third Detroit manager, and Maggs is long gone. Cabrera is out for the season, nowhere near what is mounting as V-Mart’s last lap. The Tigers are toothless, no longer fearsome. An era is over.

Over his eight years as a Tiger, Martinez has been a steady influence for a team with large egos, a guiding force in the lineup, and an outspoken mentor for Latino players, a professional hitter. He’s a beloved Tiger, the greatest designated hitter the team has ever known. But once he’s gone in a few weeks it’ll mark a transition away from an era of success to one of uncertainty.

Nothing that’s happened in the last four years can obscure the glimmer of the 2011-14 years. Martinez hasn’t hit higher than .289 the last four years, his quick bat and sure swing gradually disappearing into the old age that gets every ballplayer. After his celebrated .14 campaign Martinez’s career average was .306, and two years later it was still above that magic mark at .301, but slipping fast. He’s going to leave the game somewhere around .295, still an impressive figure, but not quite the same.

The decline and the many injuries don’t eclipse the great moments. The six hits in the last two games of the 2012 playoffs against the A’s, including a late-inning home run in Game Four. An epic multi-pitch battle with Chris Sale in Chicago in the midst of the Tigers run at the top of the AL Central, culminating in a game-winning homer. His torrid stretch over the final two months of ’14 (45 RBIs and a .359 average as the Tigers roared to a fourth straight division crown). The hits just kept coming.

There’s the image of V-Mart that will always be there in the back of our minds: the slow, gingerly manner in which he walked to the plate; his careful cradling of the bat in his hands; a few measured practice swings; the large Tiger blue shin guards that protected him from the many foul balls; the way he tugged at his sleeves in the batters’ box.

There are other things too: his guardianship of young players like Jose Iglesias and Avisail Garcia. He was there to put an arm around them in the dugout or to kick them in the ass when they needed it. Remember the time he and Justin Verlander barked at each other in the dugout, or the many times Martinez told a throng of reporters surrounding his locker that the team had to work harder? Those were leadership moments.

The Tigers and Martinez never won a World Series, but the era from 2011-14 will be remembered as one of the most thrilling in franchise history. Every season offered excitement and a touch of greatness, it seemed like the Tigers had an MVP or Cy Young Award winner every year. In 2014, when he was 35 years old, Victor finished second in league MVP voting when he had his career year. That effort earned him a second juicy contract from Mr. Ilitch. That contract may not seem worth it now, but given all the things that come with V-Mart, it was.

When Victor is gone, the last link to the winning years will be Miggy, who seems to be limping to the finish line too. Jim Leyland is somewhere smoking a hot one. Verlander is in Houston trying to win another title and finishing off his Hall of Fame credentials. Dave Dombrowski, the man who brought Martinez to Detroit, is in Beantown where he’s built another juggernaut. Max Scherzer is on his way to a third straight Cy Young in Washington. Ordonez is back home in Venezuela, embroiled in politics. Mr. Ilitch, V-Mart’s biggest fan, is gone.

Endings are always bittersweet. It’s the finality that makes it sad, but if we look back and enjoy the good times, the memories will always be there. Martinez made a lot of memories in Detroit, memories that will never fade from Tiger legend.