The Legend of Akil Baddoo is Growing 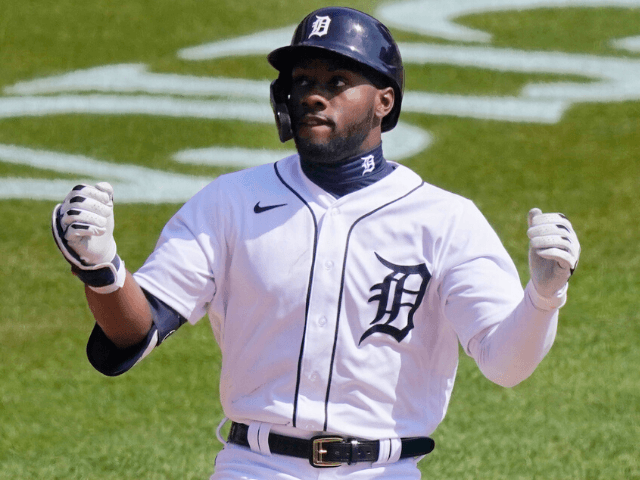 This is Motown isn’t it?  Why hasn’t anyone penned a version of “Bad, Bad Leroy Brown” with new words?

What’s the best way to become a baseball sensation? Try hitting two home runs in the first seven at-bats of your career.

That’s what Akil Baddoo accomplished in his first week as a Detroit Tiger. The story is so mind-blowingly unlikely, that it seems like a terrible Hollywood movie script.

Baddoo belted a home run last Sunday when he made his big league debut. He swatted the first pitch saw into the bullpen in left field. The following afternoon he hit a grand slam. BADDOO!

Then on Tuesday, facing the team that had drafted him and left him unprotected (the Twins), Baddoo delivered a walkoff single to give the Tigers a 4-3 victory at Comerica Park. This time, only three games into his career, you could hear chants of BADDOOOOOO from the sparse Covid-restricted crowd.

What are we to make of The Legend of Akil Baddoo? Who the hell had even heard of Baddoo before this spring? When his name popped up during spring training, you may have responded with “What the heck is an Akil Baddoo?”

The History of the Rule 5 Draft

Baddoo was snagged by the Tigers due to a little-understood and often-overlooked feature of baseball called the Rule 5 Draft. The Rule 5 Draft is actually an old rule in organized baseball dating back to the mid-1960s, but it’s roots trace back even farther.

In the 1930s, only a few teams had sophisticated scouting departments and farm systems. Previously, teams relied on grizzled old baseball players or never-was ballplayers to scour the countryside and city lots for talent. There really weren’t many rules about who could be signed, for how much, and so on. If a scout showed up with more cash, he would outbid another team for a player. Once the player was signed, he belonged to that team, who might loan him to a minor league team to gain experience. Major League teams did not have their own farm systems prior to the 1930s.

The St. Louis Cardinals changed all that when they built a scouting system and minor league affiliates. Soon, the Cardinals had dozens of teams under their control, and they spent money to pack them with prospects. The Cardinals frequently held players in their minor league system who were better than the talent some big league teams had in uniform. By the mid 1940s, the Cardinals were a juggernaut, and other organizations copied their methods.

Teams with deep pockets started to buy most of the best young players, and by the late 1940s, there was a definite disadvantage. So, MLB came up with what they called the “Bonus Rule,” which governed the signing of amateur players. Any prospect signed for more than $4,000 had to be placed on that team’s MLB roster and remain there for two full seasons. This was meant to work as a disincentive to the rich teams buying all the good young players, since it would be a disadvantage to carry a 17 or 18-year old green-eared kid on your team for two years.

But some teams did it. Famously, the Tigers signed Al Kaline for $35,000 out of high school. He never played a game in the minor leagues, and when he was 20 years old he won the batting title. Kaline was one of the most successful “bonus babies.” Others included Roberto Clemente, Harmon Killebrew, and Sandy Koufax. But mostly, the Bonus Rule curbed spending on young players.

A second problem emerged at the same time: teams stockpiling young players in their system and not advancing them up the ladder. The Rule 5 (which naturally followed a similar rule titled Rule 4) addressed that issue. Any player who was not kept on their team’s 40-man roster (after one year of being in the organization) is eligible to be selected in the Rule 5 draft by any other MLB organization. The draft proceeds in reverse order of winning percentage, so the worst teams pick first.

Who knew about Baddoo?

Last December, after spending more than four years in the Twins organization but never advancing above High Class-A ball, Baddoo was left off the Twins 40-man roster. It wasn’t the first time, but this time he was drafted in the Rule 5 by the Tigers. He was invited to spring training in Lakeland in February, the longest of long shots to make the big league club. Under Rule 5 rules, he must stay on the Tigers active 26-man roster in 2021, or risk being returned to Minnesota.

So far, there’s no danger of Baddoo being sent back to the Twins. Not with his booming left-handed bat making noise in Detroit.

But who saw this potential in Akil Baddoo, and how?

Consider this: just three years ago, Baddoo was playing for a team called the Cedar Rapids Kernels. And he missed almost two full years after undergoing Tommy John Surgery. Prior to the injury to his shoulder, the most exciting thing anyone said about Baddoo was that he was a speedburner on the base paths. He was nowhere on anyone’s radar.

But somewhere in the Tigers scouting department, someone whose job it is to keep an eye on other team’s talent, took a liking to Baddoo. And at last winter’s MLB meetings, they convinced the front office to grab Akil when the Twins left him off their 40-man. Which by the way, is understandable: Baddoo was damaged goods, still hadn’t played as high as Double-A baseball, and he’d hit only 21 homers in more than 1,000 professional at-bats.

So here we are, with Baddoo Fever in the Motor City. Baddoo jerseys are hot sellers, and the young slugger has started to draw comparisons to other phenoms in Tigers history. There was Chris Shelton (of the Red Pop Home Run Craze of 2006), and don’t forget Chris Pittaro, who smacked three hits on opening day and was supposed to be a superstar. Or what about Kevin “Hot Sauce” Saucier, who took Detroit by storm with his outlandish antics as a bullpen ace for Detroit in 1981?

But the Tigers hope Baddoo is more than a footnote in history like those three guys mentioned above. They’d rather he become a true phenom, like Mark Fidrych, who was baseball’s zaniest and most effective pitcher for a year and a few months, or Cecil Fielder, who came out of nowhere (or Japan) to club 51 homers in his first season as a Tiger.

If Baddoo keeps mashing, more fans will wear his jersey in Comerica Park, more teams will take notice to his big bat, and more “ooooooooooooo’s” will fill the ballpark. The Tigers may have gotten Akil because of an obscure rule, but now that he’s in Detroit, he’s one of ours.

3 replies on “The Legend of Akil Baddoo is Growing“