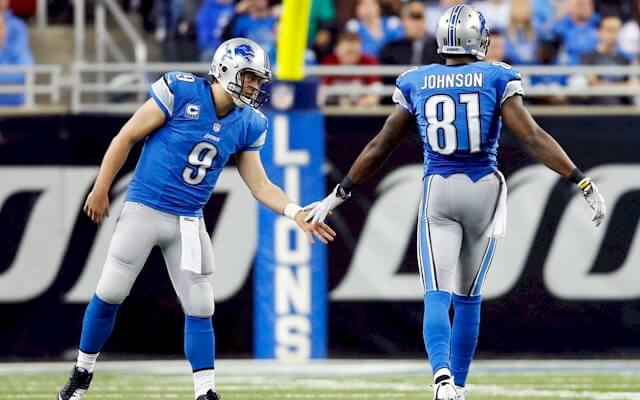 Despite never winning a playoff game, Matthew Stafford and Calvin Johnson have hooked up for many touchdowns in their careers with the Detroit Lions.

The Detroit Lions are headed in the right direction.

Go ahead, call me crazy. Scream at me, question my sanity, throw insults my way. I can take it. I have an ex-wife.

I’m serious, the Lions are making better decisions as a franchise and now is not the time to rebuild. It’s certainly not the time to trade their best wide receiver, a future Hall of Famer in Calvin Johnson.

My friend Vito Chirco made the opposite argument yesterday in this space when he advised the Lions to trade Johnson after this season to avoid a big pay increase and salary cap hit. He explained that #81 should be freed so he can chase a Super Bowl (hell, even just a playoff win) elsewhere.

I get it. I see the logic there, from a financial and sentimental standpoint. But I disagree.

Megatron belongs in the Motor City. He’s not only one of ours, he’s also still a valuable commodity who can be part of a team that has a chance to make some noise next season. That’s if the Lions make some sound decisions this offseason, which I believe they will.

What makes me think the Lions, a franchise with a history of judgment that makes Charlie Sheen look like a wise sage, can do the right things now? Because they have been doing some start things over the last 18 months. Plus they have some talented players on their roster, including Johnson.

Look, we’ve all seen the Lions change their head coaches as often as Miley Cyrus changes hairstyles. In the last decade they’ve had five head coaches, culminating in Jim Caldwell’s hiring prior to the 2014 season. Caldwell drew immediate raves for his disciplined approach and focus on fundamentals. He guided the Lions to an 11-win season and a playoff spot last year. Last January in the playoffs his team defeated the Dallas Cowboys. The scoreboard didn’t show it, the referees didn’t know it, but the Lions, Cowboys, and fans who watched the game knew it. The Lions, always seemingly snakebit when it comes to luck, were robbed out of a playoff victory when a flag was picked up in Texas.

Folks seem to forget that the Lions were an 11-win team last year who looked real tough in December and in the playoffs. A team no one wanted to play with everything on the line. This season the team looked lackluster and unprepared early in the season, but in true Wayne Fontes-fashion, the Lions got red-hot as the season wore on.

As they enter their final game of the season on Sunday, the Lions record is 6-9. They cannot make the playoffs. But earlier this year Detroit suffered two losses, one a robbery and the other a fluke. In Seattle there was Megatron reaching his arm across the goal line for what would have been a game-winning touchdown. Instead the ball was batted out of the end zone by a defender and though the Lions should have gotten the football back, the zebras got it dead wrong (isn’t that their job these days?). That win was taken from the Lions.

A few weeks ago the Lions suffered a brutal loss in Detroit when Aaron Rodgers hurled a herculean Hail Mary TD into the end zone with no time left on the clock. The Lions provided lousy defense on the play, they deserved what they got, but it’s also very probable that Rodgers should have never been allowed to throw that ball since the game should have been over on the previous play if not for a strange, somewhat phantom face mask call. Only the Lions find such freakish ways to lose games they deserve to win.

Give the Lions those two wins, lost on flukes and flubbed calls by the refs, and Detroit is sitting at 8-7 right now and still technically in the playoff hunt.

I’m not saying the Lions deserve to be in the playoffs in 2015, they lost games to the Chargers and Rams that they should have won. They seemed to sleepwalk through a loss to the Chiefs in week #8. But they are not a terrible team. They had a tough schedule this season because of how well they played last year, and still, despite the turmoil in the front office, they accomplished some good things: they won in Green Bay for the first time since the Elder Bush was President; they outplayed Rodgers and the Pack again at home only to lose on the aforementioned last second heave; they smacked the defending NFC Champion Seahawks in the mouth in a physical game on the road in October, only to lose on a bad call. After years when the Lions deserved every misery they got, these Lions deserved better.

A glance at this team since the bye week shows a record of 5-2 and an offense that has put up 30 points four times. Meanwhile, the Detroit defense has been tough, in spite of the losses of Ndamukong Suh and Nick Fairly in the offseason. Detroit’s D has held opponents to under 20 points four times in the last seven weeks. The pass rush is one of the most spirited in the league. Coach Caldwell has succeeded in getting the defensive unit to handle the line of scrimmage.

Quarterback Matthew Stafford has justifiably come under scrutiny since his arrival in Detroit. The Texan from Bobby Layne’s backyard can look like an All-Pro one quarter and Joey Harrington the next. But love him or not, Stafford has been fantastic over the last five weeks. In that stretch he’s tossed 14 touchdowns with only one pick, he’s completed more than 72 percent of his passes and his QB Rating is an eye-popping 117.1. He’s on pace to post the second-highest QB Rating of his career and he’s raised his completion percentage to a career-high 67 percent on the season. As I noted earlier this year, Stafford has established himself as one of the better comeback quarterbacks for this stage of his career. He’s well-known for his arm strength and ability to get the ball downfield. It appears that at the age of 27, Stafford is finally learning to make better decisions and it’s showing up on the field under new offensive guru Jim Bob Cooter.

It’s expected that Lions owner Martha Ford will quickly announce a new general manager and other front office personnel after the conclusion of the season. The team will make a decision on Caldwell, but I say here that he should be retained. He’s shown the leadership this team sorely lacked from the sidelines, and he’s infused his players with the energy to take their game to a new level. 17-18 wins (depending on the outcome of Sunday’s game against Chicago) in a two-year stretch is something no Lions coach has done since Wayne Fontes wore his puffy earmuffs on the sidelines back in the mid-1990s.

Stafford is improving before our eyes. Caldwell has taken this team to the playoffs once and helped steady them this year after a 1-7 start. The defense can use some improvements in the secondary, but they are solid up front. There are weapons on the offensive side, including Calvin Johnson, who is such a freakish specimen that it doesn’t matter that he’ll be 32 next September. Megatron can haul in catches for 4-5 more years.

Why jettison Calvin now, when the Lions are finally shaking up the front office,  have a good coach in place, and have a young, talented QB who is learning how to win? The Lions may not win a Super Bowl, but they are a team that can win in the playoffs soon. The Lions don’t need to rebuild. They can keep Johnson and win with him in 2016.