The next chapter in our commitment to Detroit and Corktown: Vintage Detroit Collection 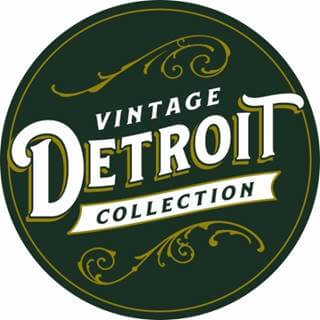 If you haven’t been to downtown Detroit recently, you’ve missed the makings of a major transformation. The city is experiencing a boom of development on a broad scale. In our backyard, which was once the home of the Detroit Tigers, an area better known as Corktown, we’ve witnessed many changes.

The Detroit Police Athletic League (PAL) now occupies a small-scale stadium on the same footprint as the old ballpark with the original field dimensions preserved.

Ford Motor Company has chosen Corktown as the home of its autonomous vehicle campus. Last year, Ford moved its “Team Edison” group into newly renovated warehouses (known as The Factory) in the heart of the old neighborhood.  Ford shocked the world last year when it announced it had purchased the Michigan Central Depot and planned a full-scale renovation to be the epicenter of its autonomous car program.

We welcome these new neighbors to one of the most historic sections of our proud city. This is the place where Ty Cobb flashed his spikes, where Joe Louis punched foes into submission, where Bobby Layne flung the pigskin. Corktown was once a vibrant neighborhood teaming with people, restaurants, saloons, and crisscrossed by trolleys. With new investments, the future looks bright for the neighborhood.

In that spirit, we’re prepared to announce an exciting new change for our business, located at 1744 Michigan Avenue.

My family has been in business in the Corktown neighborhood for 77 consecutive years. My grandparents migrated to Detroit from Martins Ferry, Ohio in 1942 – during the early stages of World War II. At the same time a 14-year old Gordie Howe was strengthening his hockey skills on frozen ponds in Saskatoon, my grandfather opened a small market at the corner of Dalzelle and Wabash in the shadow of the old train station in Detroit. When Al Kaline became a young batting champion in 1955, my family was running a business only a short walk from what was then known as Briggs Stadium.

My brother David and I began our current business on Opening Day of the 1982 baseball season on the corner of Cochrane and Kaline Drive. Dave was 13-years old and I was 11. Sparky Anderson was starting just his third full season as manager, and optimism was high that the Tigers would mature into a winning team. Soon my brother and I were selling Tigers caps and souvenirs — and we were full-scale street vendors when the hopes came to fruition in the magical 1984 World Series championship season.

We opened The Designated Hatter in March of 1985 at 1740 Michigan Avenue in the building that housed our family’s Coney Island restaurant. In 1990, we expanded into the adjacent building at 1744 Michigan Avenue and we’ve been there ever since. We renamed the business Detroit Athletic Co. in 2000, abandoning our baseball-centric operation and exclusively selling items for the four Detroit professional teams.  The baseball-only name just didn’t fit our new format.

I’m still here in Corktown serving customers and the community, and I’m delighted to announce that our multi-generational commitment to the city of Detroit and Corktown will begin its next phase as we rebrand our retail operations to the name Vintage Detroit Collection. As our loyal customers know, we have served as the gatekeepers for Detroit’s rich sports history throughout our time in the retail trade near Tiger Stadium. We hope to improve and expand what has become a passion of ours: preserving the happy memories of Detroit’s sports fans.

Two things that won’t change is our commitment to great customer service and our dedication in offering the best items for the passionate fans of Detroit sports teams.

Our name will officially change to Vintage Detroit Collection on May 28 of this year. Included within this article is our new logo. Look for more changes, new hours, and upgrades as we – and our neighborhood – enjoy the benefits of the developments that now surround us.