The nine most controversial trades in Tigers’ history

Denny McLain stretches during spring training with the Washington Senators in 1971. His trade from the Tigers prompted a lot of emotion in Detroit.

The July 31st trade deadline has come and gone, but not without the Detroit Tigers pulling off the biggest swap of the trade flurry. On Thursday, Detroit acquired David Price from the Tampa Bay Rays in a three-team trade that sent Austin Jackson to the Seattle Mariners and Drew Smyly to the Rays.

The trade will be analyzed and poked at for a while, and it takes some time to determine who wins a trade. But this article isn’t concerned with that, it looks at controversy, buzz, furor, anger, etc. I want to look at the trades that caused the most outrage or controversy over the years. Here’s my top nine in chronological order, and remember this isn’t about biggest or worst or best, it’s about which trades were most controversial at the time they were made.

Gee Walker to the White Sox for three players (Dec. 1937)
Few are around now to testify to it, but when this trade was announced in 1937, Tigers’ fans were outraged. Gee Walker was one of the most popular players to ever wear the Old English D. You may have never heard of him, or to some of you he may simply be an entry in the Baseball Encyclopedia, but Walker was beloved. Female fans were especially fond of Mr. Walker, who was a matinee idol in the outfield long before Al Kaline or Kirk Gibson. That he was sent to Chicago, a natural rival for Detroit, made the trade even harder to swallow. When Walker came back to Detroit for the first time as a member of the ChiSox in 1938 he was greeted with a standing ovation at Navin Field. Walker never again enjoyed the sort of success he had in Detroit, he batted .317 for the Tigs and .275 elsewhere.

Harvey Kuenn traded to Indians for Rocky Colavito (Apr. 1960)
When you trade the reigning batting champion, you’re bound to draw some criticism. In the 1950s there were basically two camps of Detroit fans — those whose favorite player was Al Kaline and those whose fave was Harvey Kuenn. This deal was panned even more in Cleveland, where Rocky was a huge fan favorite. The deal ended up benefiting the Tigers and loss of Kuenn was generally accepted.

Jim Bunning to the Phillies for Don Demeter & Jack Hamilton (Dec. 1963)
A Hall of Famer, Bunning was never really loved by Detroit rooters, despite his great skill on the mound. Still, when this trade was announced during the ’63 Winter Meetings, it was a stunner and Detroit papers criticized it heavily. Bunning went on to win more than 100 games, while the two players the Tigers got did very little. This is a deal that baseball insiders were puzzled by, but fans were not that outraged. 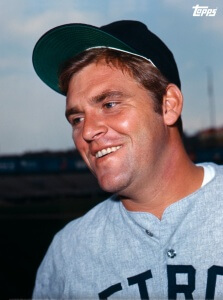 Denny McLain’s trade from the Tigers to the Washington Senators prompted a lot of emotion in Detroit.

Denny McLain traded to the Senators with three others for Ed Brinkman, Joe Coleman, and Aurelio Rodriguez (Oct. 1970)
Just 26 years old, McLain had won the Cy Young awards in both 1968 and 1969, But then he imploded in 1970, not only on the field where he went 3-5 and made just 14 starts, but off the field where he was suspended for selfish conduct. Never a real team player, McLain was jettisoned by GM Jim Campbell, who had had enough of Denny’s antics. The furor over this deal from the media has never been matched by another in the history of the Tigers. It also ended up being a brilliant trade for the Tigs as Rodriguez, Brinkman, and Coleman did a lot to help the team for a long time.

Mickey Lolich shipped to Mets for Rusty Staub (Dec. 1975)
How do you treat a consummate professional who had given everything he had to the Tigers for more than 15 years? You trade him to the Mets, of course. The 34-year old left-hander was in the decline phase of his career, but the way he was shipped out of Detroit was a bit distasteful. He should have had a chance to end his career as a Tiger, but instead he bounced to the Padres after the Mets.

Ron LeFlore exiled to the Expos in exchange for Dan Schatzeder (Dec. 1979)
For a generation of young fans who were cutting their teeth on the mid-1970s Tigers, there were two players they identified with: Mark “The Bord” Fidrych and Ron LeFlore. But unbeknownst to those fans, LeFlore was a thug in the clubhouse and once Sparky Anderson arrived in June of 1979, it was only a matter of time before Running Ron’s was run out of Motown. LeFlore’s flashy, big-time party lifestyle was not a good example for the young Tigers coming up and it rubbed Sparky the wrong way. When this trade was announced during the winter meetings, big block letter headlines filled the Detroit newspapers, and it was clear that when Sparky had said, “It’s my way or the highway,” it was LeFlore who he was looking at.

Chris Hoiles to the Orioles for over-the-hill Fred Lynn (Aug. 1988)
This is the only prospect for a veteran trade deadline move on this list. I recall that the media and many fans were irritated that Detroit let go of a top catching prospect for an aging Fred Lynn. But Detroit was in first place and looking to repeat as AL East Division champs, so Bill Lajoie pulled the trigger. Lynn was mediocre down the stretch and Detroit lost the division by a single game (though it was the bullpen that really cost the Tigers). Those who hated this deal were right: Hoiles ended up playing 10 years for the O’s and averaged more than 20 homers.

The complicated three-way deal that sent Jeff Weaver to the Yankees, and brought Carlos Pena and Jeremy Bonderman to Detroit (July 2002)
Fans had basically nothing to root for in the early 2000s, except the promise of Weaver, a righty who couldn’t seem to throw the ball without it dipping and diving, and who had a chip on his shoulder that endeared him to suffering Detroit fans. But then — BAM — Weaver was traded for a first base prospect and a young pitching prospect. Worse of all, Weaver landed with the Yankees — the YANKEES! — a team that seemed to gobble up every other team’s good young players. It all ended up pretty good for Detroit though, as Weaver struggled under the bright lights of NYC, while Carlos Pena and Jeremy Bonderman did some good things in Motown. In fact, Bonderman pitched the clinching game that eliminated the Yankees in the 2006 ALDS.

Doug Fister goes to Washington for very little (Dec. 2013)
To be fair, the jury is still out on whether this will be a dud or a dandy for the Tigers, but that’s not what this list is about. This list is about “controversial” trades, and this one might be the most talked about and discussed deals of the Dave Dombrowski era. Fister was popular in Detroit because 1) He always battled really hard; 2) He went something like 15-1 after coming over midseason in 2011 (ok, it was 8-1); 3) He never seemed to mind being overlooked on a staff where Justin Verlander and Max Scherzer and just about everyone else got more attention; and 4) He was a super nice guy.

The biggest shocker and most talked-about part of this trade was what the Tigers got in return: a left-handed situational reliever (Ian Krol), a pitching prospect most people had never heard of (Robbie Ray), and a very mediocre utility man (Steve Lombardozzi). When Lombardozzi ended up being traded for a player (Alex Gonzalez) that they could have had off the waiver wire, it started to be even more puzzling. Krol pitched pretty crappy too, so that didn’t help. The main thing is, Fister was a very good starting pitcher, an underrated piece of the team who made some big starts in the postseason, and it seems like Dombrowski had a brain fart and dealt him for next to nothing. Maybe Ray will morph into Tom Glavine in a few years, but regardless, this trade has been very controversial.

One reply on “The nine most controversial trades in Tigers’ history“