The thrilling and unexpected 15 months that changed Detroit sports forever 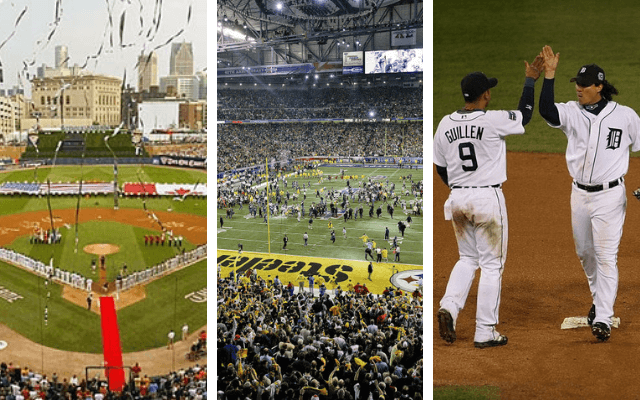 It was June of 2005, and if you were a Detroit sports fan you couldn’t be blamed for being a bit depressed. There was little to be hopeful for, little reason to care, very little to cheer about.

On June 23 the Pistons fell in Game Seven of the NBA Finals. The Tigers were in year ten (or maybe it was year eleven) of a rebuild that seemed more like a sinking ship than a rising skyscraper. The city’s once-proud baseball team was only two years removed from having lost an embarrassing 119 games. The football team was still The Same Old Lions, drifting along amidst a six-year run of at least ten losses. That period would feature four head football coaches, a time when the only criteria it seemed a man needed to lead the Lions was to have a last name that started with the letter “M”.

Detroit fans could count on the Red Wings back then, but the National Hockey League intervened and the 2004-05 season was wiped out by a labor disagreement. No hockey for a full year, a terrible football team, a crushing loss in the NBA Finals, and a miserable baseball team was a recipe for indigestion, Detroit Coney style.

But an unexpected 15-month stretch turned everything around, and it launched a period of sustained excitement around sports in the Motor City.

It all started with cleaning crews. The city of Detroit dispatched hundreds of people into the streets of downtown Detroit in early July to tidy things up. The reason? The 2005 Major League Baseball All-Star Game, to be hosted at Comerica Park on July 12. Garbage, graffiti, and homeless people were removed or relocated. When baseball fans and the media arrived for All-Star Week, they found a spiffy city. The festivities proved to be exciting too.

The 2005 All-Star Game was where Detroit fans got their first glimpse at the flame-throwing future of the Tigers pitching staff. Young Justin Verlander started the game for the U.S. team against a mix of stars from outside the United States. The former first-round pick had already made his major league debut, but that came in Cleveland, and he had been sent back down to the minors since. His scoreless first inning was the first time Detroit fans had a chance to cheer his fastball. Later in the game, reliever Joel Zumaya hit 99 miles per hour on the radar gun. Suddenly, there was reason to be optimistic about the Tigers’ future.

The All-Star Week celebration included the long-awaited return of Mark “The Bird” Fidrych to Detroit. The 1976 Rookie of the Year made an appearance at the celebrity softball game and several parties. This writer had a chance to chat with The Bird at one of those celebrations, under a tent outside Comerica Park the night before the All-Star Game. Fidrych was  gracious, even as he scarfed down a plate of food, expressing his excitement at being back in Detroit in front of the fans who treated him so well.

The Tiger representative in the All-Star Game was catcher Pudge Rodriguez, in his second season as Detroit’s baseball messiah. The former MVP entered the game as a defensive replacement and made two trips to the plate, receiving a large ovation each time. The American League won the game, 7-5. The game was exciting, and the home run derby the night before was historic, as Philadelphia’s Bobby Abreu sent more than two dozens baseballs soaring into the bleachers to set a record. Overall, Detroit showed the world that they could put on a great show.

As luck would have it, seven months after the ’05 All-Star Game, the city of Detroit would host the Super Bowl. The first time the city hosted the big game, it was in Pontiac at the Silverdome, but this time it would be downtown at Ford Field, the new jewel. Once again the city cleaned up the streets for their guests, and once again the world turned their eyes to the Motor City.

Super Bowl XL really was extra-large: it featured the Steelers and the Seahawks, with Detroit native Jerome Bettis returning to his home town for Pittsburgh. “The Bus” failed to get into the end zone, but the Steelers used two exciting scoring plays to seal a 21=10 victory for their record fifth Super Bowl title.

Super Bowls and All-Star Games are fun, but team success is another thing. In 2006 the city of Detroit was shocked when their baseball team did something unusual: win games. In the fall of 2005, the Tigers fired manager Alan Trammell, a merciless decision that irked many in the city. He was replaced by Jim Leyland, one-time skipper in the Detroit farm system, where he managed, among others, Fidrych and Trammell in the 1970s. Leyland was making his return to a major league dugout after a seven-year absence. There was some concern that the game may have passed him by, and in his previous job, as manager of the Rockies, Leyland had abruptly quit after one season.

Verlander and Zumaya made the trip north with the team from spring training, giving the 2006 Tigers a young energy. The team won their opening game in Kansas City behind Kenny Rogers, a pitcher acquired as a free agent in the offseason, The next two games they hit 11 home runs and scored 24 times, and on April 7, Verlander blanked the Rangers 7-0 for his first major league victory. The Tigers flew back to Detroit for their home opener with a 5-0 record.

The Tigers finished April with a 16-9 record, then they played even better in May, at one point winning 15 of 16 games to move into first place. They went 17-2 to close out June and at the midway point of the 2006 season, the Tigers were on pace to win 110 games. It started to feel like 1984 again.

The Tigers stuck in first place until the final weekend of the season, but as a wild card team they knocked off the Yankees in the playoffs, shocking even their most ardent fans. A few days later in October, Magglio Ordonez hit “The Shot Heard Round Detroit” to send the team to the World Series. Even a five-game loss in the Fall Classic didn’t dampen that magical year much. Baseball was back in Detroit, and there was hope in Motown.

Starting in July of 2005 with that All-Star Game at Comerica Park, to the Super Bowl in February of 2006, and culminating with two World Series games at the same venue in October of that same year, the city of Detroit hosted three of the most important events in sports in the span of 15 months. The excitement jump-started a stretch that saw the Tigers revitalized, the Red Wings winning another Stanley Cup less than two years later, and even the Lions climbing back to the playoffs.

Those 15 months transformed Detroit and the sports team that play there. One could argue that the Pistons and Red Wings wouldn’t be downtown today had it not been for the success of those three events in 2005-06. We could argue that the success of the Tigers, completely unexpected, and the four division titles and one more pennant that followed, were the catalyst to help the rebirth of downtown Detroit. Things looked bleak back then, but quickly they changed.

The Tigers are struggling right now, the Pistons and Lions are teetering between mediocre and good, and the Red Wings have been doing the unimaginable: missing the playoffs. But it can seem darkest before the dawn, and Detroit has already seen, as recently as 14 years ago, how storm clouds can be replaced by clear skies.