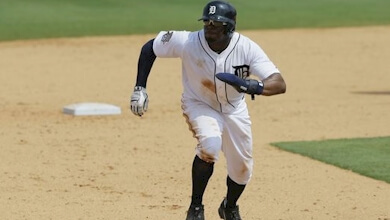 Rajai Davis may be fast but he hasn’t been stealing bases at a very successful clip in 2015.

Running amok:
Just before Labor Day, the slumping Tigers fell out of first place in the major leagues in batting average, which they’d held all season, slipping behind Kansas City into second place with a .271 mark. They were still tied with the Dodgers for first in team on-base percentage (.327) and were third in OPS (.755)—but they were only tenth in the majors in runs scored. Why is that?

Watching a recent game in which Anthony Gose was picked off first base and later thrown out stealing hints at part of the answer.

Speed was a dimension sorely missing on the Tigers until last year, when the prodigious base-stealer Rajai Davis came on board. Detroit had been habitually near the bottom of the major leagues in stolen bases. But Davis added a new dimension,

In 2014 Detroit jumped from thirty-five to 106 in steals, their highest theft total since 2001, when they stole 133. This season the addition of Gose gave the team a potent double threat. And others on the team like Ian Kinsler and Jose Iglesias are no slowpokes either.

But Detroit will not steal anywhere close to 100 bases this season—they are stealing bases at a rate just above the major league average. And no team has been caught stealing more than the Tigers, who had forty-three stealers cut down as of Sept. 7.

Detroit is also at the top of the majors in GDP—not gross domestic product, but times grounding into double plays. No team in either league had more than the Tigers’ Labor Day total of 125.

In all, that means 168 runners wiped off the bases via caught stealing or double plays—an average of one every seven innings.

The Tigers have been pretty good at getting on base but not very good at staying there.

If you got all of them right, you are eligible to pitch an inning of relief for the Tigers yourself!

Backwards priorities:
Count me among the minority of fans who believe replay has ruined baseball. No more ridiculous proof is needed than when Brad Ausmus spend a minute or so signaling to the umpires that he was considering challenging the final play of the eighth inning while Justin Verlander was already eagerly taking the mound to try to finish a no-hitter. Detroit, as you recall, had a 5-0 lead at the time. The replay on a call at first base, even if overturned, wouldn’t have produced another run.

Was it coincidence that Verlander gave up a hit—just barely—to the first batter he faced after Ausmus had let him twist in the wind for a short time before deciding not to challenge? Probably. But maybe not.

In the post-game interview, Ausmus defended his decision by saying that winning the game was more important than the no-hitter. Oh, sure it was. With the Tigers out of the race and their win probability for that game in the 99 percent range, what did the team and its fans need most then? A “safe” call at first or a no-hitter—which undoubtedly would have been by far the most exciting event of the 2015 season?

The Matrix:
No discussion of a season’s follies would ever be complete without a peek inside the minds running the mouths of the Tiger announcers. Here, then, is verbatim dialogue from a broadcast in August, with Kirk Gibson in the TV booth along with Mario Impema.

Mario: Happ gave up two walks in the second, and then a McCann two-run double…
Kirk: Yeah, walks are shown to score a lot, you walk two for sure, odds go up. I could dig my run matrix out for you; you ever looked at that?
Mario: Your run matrix?
Kirk: Yeah, it tells the percentage of whether a guy’ll score or not, where he’s at, certain situations that happen.
Mario: See, I wasn’t good in math; that’s above my pay grade.
Kirk: You pick it up very quickly.
Mario: Really?
Kirk: Yeah, I think our viewers here would also.
Mario: What does the word “matrix” mean?
Kirk: You tell me, now you’re trying to confuse me. I just know what it is.

ERA answers:
In order from “best” to worst, it goes Joba, Al, Angel, Bruce, Ian, Tom, Neftali, and Guido—which sounds (and performs) more like a gang of small-time hustlers than a major league relief corps.